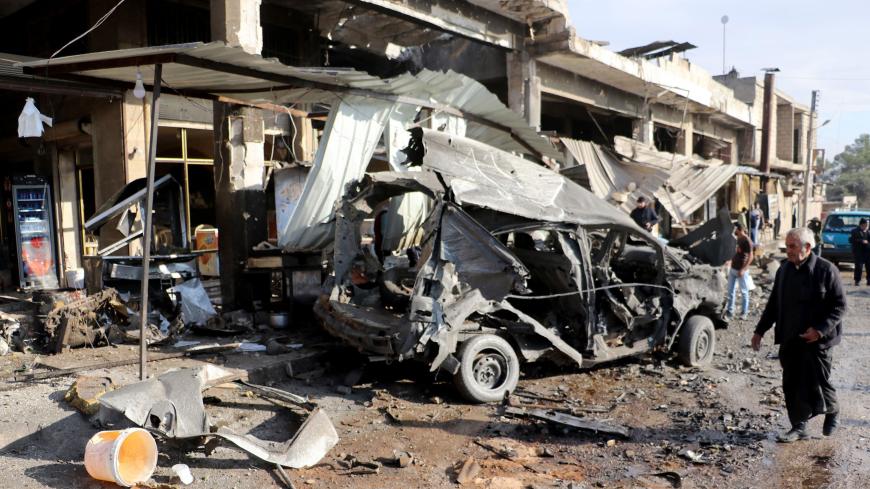 A view of the destruction after Assad regime forces carried out airstrikes that targeted a marketplace in Idlib's Serakib town, which is a part of a de-escalation zone in Syria, Dec. 2, 2019. - Huseyin Fazil/Anadolu Agency via Getty Images

ALEPPO, Syria — On Dec. 1 and 2, Syrian regime fighters launched ground attacks on the opposition in eastern Idlib province, trying to retake their lost positions. In the fierce battles, regime forces succeeded in regaining control of Ijaz village but failed to recapture the rest of the villages, such as Suruj, Rasm al-Ward and Istablat.

The number of those killed totaled around 100 people, according to the Syrian Observatory for Human Rights in Coventry, England.

Syrian and Russian warplanes bombed opposition areas in eastern and southern Idlib dozens of times, adding civilians to the casualty count. In Saraqib, at least one person was killed, and at least nine died in a raid on the vegetable market in Maarat al-Numan. The planes also bombed Idlib Central Prison, killing or wounding 23 people. The educational complex in Maarat al-Numan announced Dec. 1 it was suspending school because of the danger.

Activist Bilal Bayoush told Al-Monitor that Russian warplanes and regime helicopters carried out dozens of airstrikes in southern and eastern Idlib during the last week of November.

Bayoush said thousands of civilians have been forced from the area, as frequent shelling focused on populated neighborhoods, which certainly means the beginning of a new battle by the regime forces.

The regime's recent escalation in aerial and ground bombardments in Idlib province came after a period of relative calm after Russia announced a cease-fire Aug. 30. But since the regime resumed aerial and ground bombardment in early November, targeting vital facilities such as bakeries, killing dozens of civilians and displacing others, opposition forces again took up offensive military operations.

Regime forces have suffered heavy losses in counterattacks launched by the Turkish-backed National Liberation Front, which is affiliated with the Free Syrian Army, and with help from Hayat Tahrir al-Sham.

National Liberation Front spokesman Capt. Naji Abu Hudeifa told Al-Monitor that Russia and Syrian President Bashar al-Assad have repeatedly violated the cease-fire. He confirmed they have stepped up their shelling of civilian areas, forcing the people there to flee.

“The regime forces ... are striving to take control of more villages. They have significantly intensified their shelling since the beginning of November until now. The regime's and Russia’s planes have destroyed many [critical] facilities,” Hudeifa added.

Meanwhile, activist Abdel Fattah al-Hussein told Al-Monitor, “Regime forces have ... redeployed on a number of axes opposite Russian checkpoints in Sheikh Baraka and Abu Dhour." He said Russia and the regime want to force the Turkish-backed opposition out of the way so they can reopen the international Aleppo-Damascus and Aleppo-Latakia highways.

Reopening the routes is one of the items outlined in the Russian-Turkish agreements signed in September 2018 in Sochi, Hussein noted.

But the regime's military efforts aren't limited to the Idlib fronts; they also extend to the northern countryside of Latakia in the Kurd and Turkmen mountains. Regime forces reinforced their positions on the Kabana fronts and the highlands with fighters and heavy military equipment. They launched dozens of ground attacks against opposition positions there during the last week of November, despite their continued failure to make significant progress and their major losses. Helicopters and warplanes paved the way for the attacking forces, with dozens of airstrikes with barrel bombs and rockets.

A Hayat Tahrir al-Sham military source told Al-Monitor on condition of anonymity that attacks by regime forces in Kabana have been continuously countered since mid-November, even though the regime's militias there are backed by Iran's Islamic Revolutionary Guard Corps.

Free Syrian Army Col. Mustafa Hashim told Al-Monitor, “It's clear there is ongoing competition between countries linked to the Syrian dossier, and this struggle for influence is the main reason for the ongoing killing and displacement in Idlib province. We will continue to [suffer] for international disputes ... and we might even see further escalation by the regime forces."