Syrian shelling in Idlib knocks out dozens of medical facilities

The opposition in Idlib province accuses Syrian and Russian warplanes of deliberately shelling hospital and medical facilities in the province and its surroundings, pushing thousands to flee. 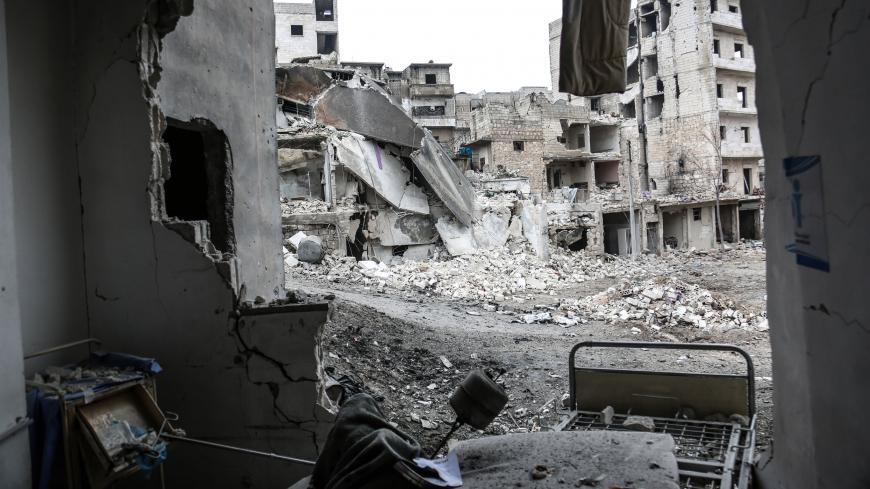 ALEPPO, Syria — The staff at the Idlib Health Directorate and the medical cadres in the province hospitals protested in front of the directorate building Feb. 6, denouncing the repeated attacks by Russian and Syrian warplanes targeting medical facilities and hospitals in the Idlib province and its surroundings in northwestern Syria, coinciding with the ground operation of the regime forces and their allies, Russia and Iran.

Protesters called on UN Secretary-General Antonio Guterres to visit Idlib province himself and see the targeting of hospitals and health facilities, which threatens the lives of the 3 million people who live in the area.

In November 2019, Syrian regime forces and fighters supported by Russia and Iran began a ground military offensive against the opposition-held areas in northwestern Syria, but ground attacks escalated on Dec. 20, 2019. The regime forces have since taken control of dozens of villages and towns after they bombed them with various types of weapons, by land and air, causing hundreds of deaths and injuries among civilians, displacing thousands of others.

Russian warplanes bombed the Sarmin Health Center Feb. 4, which led to the almost complete destruction of the building. Warplanes targeted al-Huda Hospital in the town of Hoor in the western countryside of Aleppo Feb. 1, destroying large parts of the building.

Journalist Imad Zahran, director of the information office in the Idlib Health Directorate, told Al-Monitor, “The number of health facilities that were put out of service as a result of deliberate targeting by Russian and Syrian warplanes has reached 49 hospitals, centers and medical points since April 2019, among which are 11 hospitals and health centers attacked in January 2020 only, and two hospitals in February, while 21 hospitals and health centers have been completely destroyed.”

Zahran added, “The bombing has killed and injured a number of doctors and workers in the hospitals of the Idlib Health Directorate. Some buildings have been almost completely destroyed along with their medical equipment, which prompted the directorate to relocate a number of health facilities to the places of displaced persons' gatherings near the Syrian-Turkish border north of Idlib to provide health services.”

The Syrian Civil Defense has documented the targeting and destruction of 55 health facilities since the beginning of 2019, while civilians are in dire need of health centers.

Mohammed al-Hallaj, the director of the Response Coordination Group, a humanitarian nongovernmental organization working in Idlib, told Al-Monitor, “The number of hospitals and health centers that have been targeted by Russian warplanes has reached 19 since the beginning of 2020 in Idlib province and surrounding opposition-held areas in northwestern Syria.”

He added, “The destruction of hospitals was an additional factor in pushing people to flee their towns due to the loss of medical services.”

Hallaj stressed, “The humanitarian situation in northwestern Syria is very bad as a result of targeting hospitals and medical points while the remaining ones find themselves unable to cover the needs of people in light of the high population density.”

Civil activist Obaida Dandoush told Al-Monitor that warplanes target all public facilities, including hospitals, ambulance centers and civil defense centers, to force civilians to search for other centers for treatment, which leads to casualties among the injured. Health centers, he explained, are far from the target area and civilians who are still present in those areas targeted by the regime forces are not receiving treatment. Some facilities have stopped providing services for fear of being targeted.

Dandoush added, “Health centers and hospitals located in the border areas are unable to provide proper health care because of the population density, the available medical equipment is insufficient and the majority of hospitals and medical points near the lines of engagement work to provide first aid only, since operation rooms are out of service.”

For his part, the head of the secondary care department in the Idlib Health Directorate, Yahya Nehmeh, told Al-Monitor, “Medical staff in the liberated areas face many difficulties, most notably the absence of safety as a result of the continued shelling, and the number of auditors increasing so dramatically. There is a shortage of consumables, medicine and medical equipment, which were never enough to begin with.”

He emphasized, “The high number of auditors on hospitals and health centers contributed to forming a great pressure in light of the decline in health sector support and the scarcity of organizations' work.”

Nehmeh noted, “Hospitals need medical equipment because theirs are worn out as a result of continuous use, and they need dialysis equipment, intensive care equipment, baby cots, beds, especially with the population increasing after escaping the military campaign by the regime forces and Russia. The truth is, the Health Directorate cannot properly cover health services for all civilians due to its weak capabilities.”