The Russian president ultimately sees Bashar al-Assad as the solution to Turkey’s border crisis, but is playing a long game. 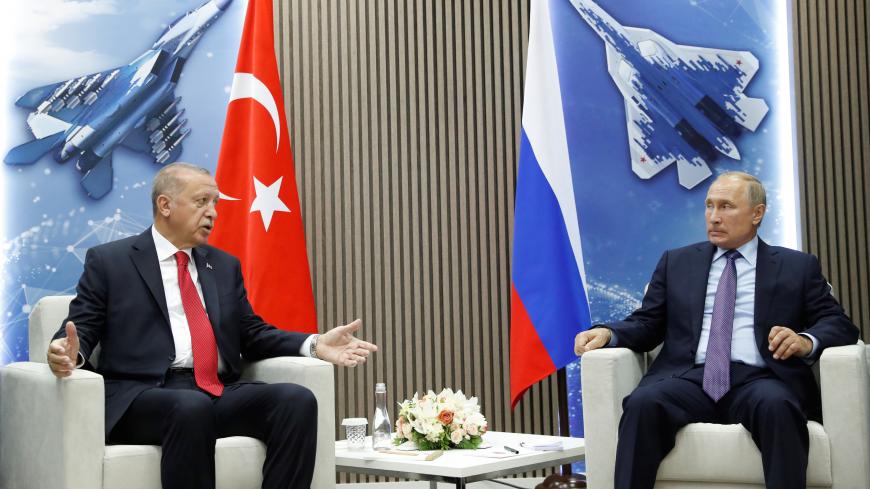 Russian President Vladimir Putin and Turkish President Recep Tayyip Erdogan speak during their meeting on the sidelines of the MAKS-2019 International Aviation and Space Salon in Zhukovsky outside Moscow, Russia, Aug. 27, 2019. - Maxim Shipenkov/Pool via REUTERS

Turkish President Recep Tayyip Erdogan does not seem to be inclined toward introspection and second thoughts, but Syria may eventually be an exception. He took up the cause against Syrian President Bashar al-Assad in 2011, backing the protesters and opposition forces, including jihadist outliers, as well as allowing a "two-way jihadist highway," which contributed to the expansion of the Islamic State and the tens of thousands of terrorists now based in Idlib.

Talk about a crisis on your southern border. Erdogan fears that he could face a massive exodus of refugees from Idlib because of the fighting there. Ayla Jean Yackley reports that Turkey “is cracking down on unregistered migrants, forcing them back to camps along the border if they do not have papers. It denies reports that it has forcibly deported hundreds or thousands back to Idlib, where they face possible violence or recrimination. But officials at the Bab al-Hawa border gate were quoted as saying Turkey had expelled 8,901 Syrians in August.”

Erdogan’s seemingly "no way out" quagmire has been a windfall for Russian President Vladimir Putin, who has positioned himself as his Turkish counterpart’s indispensable ally — an amazing turnaround from four years ago when Turkey shot down a Russian plane and relations spiraled downward.

But Erdogan can’t quite swallow Putin’s ultimate answer for Erdogan’s dilemma — burying the hatchet with Assad. And the United States is doing what it can to prevent Erdogan from allowing Putin and Assad to carry the day.

The Russian-Turkish agreement in September 2018 on a demilitarized zone in Idlib “has been honored more in the breach than in the observance,” Semih Idiz writes. Putin would prefer an Aleppo model, that is, to back Assad’s forces to reclaim the territory and wipe out the remaining armed opposition groups, which, according to US and UN estimates, include tens of thousands of terrorists. But doing so could unleash hundreds of thousands of refugees into Turkey, which already houses 3.6 million displaced Syrians.

Metin Gurcan got the scoop leading up to the Putin-Erdogan "ice cream summit" in Moscow Aug. 27. “Tensions in the rebel-held province shot up Aug. 19 after a Syrian fighter jet struck a pickup of the Faylaq al-Sham group escorting a Turkish military convoy, which, according to Ankara, was taking reinforcements to the Turkish observation post at Morek in the southernmost corner of Idlib,” Gurcan writes. “The situation grew into a crisis between Ankara and Moscow as Syrian forces encircled the Morek base, where about 200 Turkish soldiers are stationed, while marching into the key town of Khan Sheikhoun. … Putin was unresponsive to a request for a phone call with … Erdogan, Turkish sources with direct knowledge of the matter told Al-Monitor.” Russian Foreign Minister Sergey Lavrov did not exactly take up the Turkish cause, saying Aug. 26 that “no one has ever agreed that there would be no retaliation of this kind against terrorist organizations that attack [us] by fire.”

Instead, Putin offered Erdogan a starring role at the 4th International Aviation and Space Salon MAKS-2019. The atmospherics seemed to be the right touch, and Gurcan notes that “the most important aspect of the meeting was arguably Putin’s announcement that Russia was ‘ready to offer flights on Su-30SM fighters to Turkish pilots.’ Should this materialize, it would mark the first joint trainings between Russian and Turkish military pilots and the first time the air forces of a NATO member and Russia engage in drills aimed directly at interoperability.”

But on Idlib, it was more of the same. Putin, meeting with Erdogan the next day, said they had “mapped out additional joint measures for neutralizing terrorist hotbeds in Idlib and normalizing the situation both in this zone and in the rest of Syria.”

“In reality,” Maxim Suchkov reports, “it appears to mean that the Russian and Turkish militaries and intelligence teams get tasked with yet another mission of elaborating these ‘additional joint measures’ that may virtually freeze the status quo. … The trick is the status quo in the current situation likely means the continued advance of the Syrian army in the area at best, perhaps, with less deadly attacks on Turkey’s own military posts.”

Last week, Erdogan raised the stakes in Idlib even higher by warning that Europe, not just Turkey, will pay the price for any escalation leading to a refugee crisis. He said Europe has not fulfilled its pledge of $6.6 billion in refugee assistance, and warned that Turkey “may be forced to do this (open the gates) to get this (international support).” He added that he expects a safe zone along his southern border that will accommodate at least 1 million Syrians.

Asked his take on US-Turkey talks on a safe zone in northeast Syria, Putin seemed unusually understanding. “We believe the creation of a security zone on the southern borders of the Republic of Turkey will help ensure the territorial integrity of Syria itself,” he said. “In this respect, we support all measures aimed at de-escalation in this zone.”

Putin has not given up his line that the ultimate aim is Syrian sovereignty over the entire country. But he knows that a US-Turkey safe zone is not yet a done deal, as there are still differences about the size of the zone; the United States seems to be holding the line at about 15 kilometers. In remarks to the ruling Justice and Development Party regional leadership, Erdogan indeed said “there are major differences” between the United States and Turkey on a safe zone. “Doing this with our American friends is the optimum way for all of us," Erdogan said. "Yet, if the groundwork for this doesn’t emerge, then we have completed our preparations and will start this job by our own means” by the end of September.

Putin therefore plays the long game. Rather than criticize, he prefers to keep Erdogan’s counsel. He also may consider how to leverage the "safe zone" concept for his own interests in Idlib.

US raises the stakes in Idlib

“There may be a consensus that the West is okay, for now, with the terrorists boxed in in Idlib, which has become a kind of penal colony where the most violent inmates rule over the civilians,” we wrote earlier this summer. “The United States and the international community are warning Russia and Syria against an escalation, and Turkey is obviously opposed to one. Washington and its European allies are also loath to grant Assad, and by extension Putin and Iran, their perhaps decisive victory in Syria.”

The Trump administration has since put down a new marker. On Aug. 31, US warplanes hit a terrorist camp in Idlib province, reportedly killing 40 militants on the eve of the Russian-brokered cease-fire. The Russian Foreign Ministry referred to the US attacks on Idlib as “puzzling and alarming,” and as risking the Aug. 31 cease-fire.

“The ongoing Idlib campaign has also gotten in the way of the Donald Trump administration’s effort to defeat al-Qaeda’s Syrian arm,” Jack Detsch reports. “The Pentagon’s ability to launch attacks against the group is limited in the province, where Russian fighter jets control the air. The area, which has not been fully recaptured by forces loyal to Assad, is seen by intelligence officials as a possible launching pad for external attacks. The two strikes against alleged al-Qaeda leaders this summer come as the United States has been frustrated by Russia’s failure to share intelligence on terror targets in Idlib province, where experts believe members of the militant group’s Shura Council have deepened their influence.”

The non-jihadist opposition forces appear to be losing ground to the Russian-backed Syrian forces. Khaled al-Khateb reports from Syria that “battles are continuing in Idlib province despite a declared Aug. 31 cease-fire and the Turkish-backed Free Syrian Army (FSA) is sending more fighters to the area to support opposition forces as they try to counter regime advances. Backup from the FSA’s National Army has been arriving from Aleppo province to the fronts in southern Idlib since Aug. 18, but so far the reinforcements haven't been enough to stop regime forces and their allies, which seized the villages of Khwein al-Kabir, Tell Aghbar and al-Tamanah on Aug. 29 and 30. The week before, the regime took over Khan Sheikhoun and parts of northern Hama province."

The crisis on the border, and Assad’s own decision-making, which is not completely under Putin’s control, may make it harder to keep Idlib on a low boil for much longer. Kirill Semenov suggests an eventual Russian offer could be some type of arrangement where Assad gains access to the M4, M5 highways, with a safe zone controlled by Turkey on the border. While the bad blood between Assad and Erdogan can’t be easily wished away, Erdogan seems at least willing to listen to what Putin has on offer. We have written here that Putin’s preferred path has always been the beginning of some understanding between Ankara and Damascus, but there are many moving parts — including Washington, which will do what it can to complicate or slow a Russian-Syrian advance in Idlib.

As so much of Syrian diplomacy is top down, the next benchmark will be the Sept. 16 summit in Ankara between Erdogan, Putin and Iranian President Hassan Rouhani, which could reset the dynamics prior to Erdogan’s meeting with US President Donald Trump at the UN General Assembly the following week.