Following the Helsinki summit, Russia is working to deliver what each party is expecting from it: security to Israel, cooperation with Iran and engagement with the West. 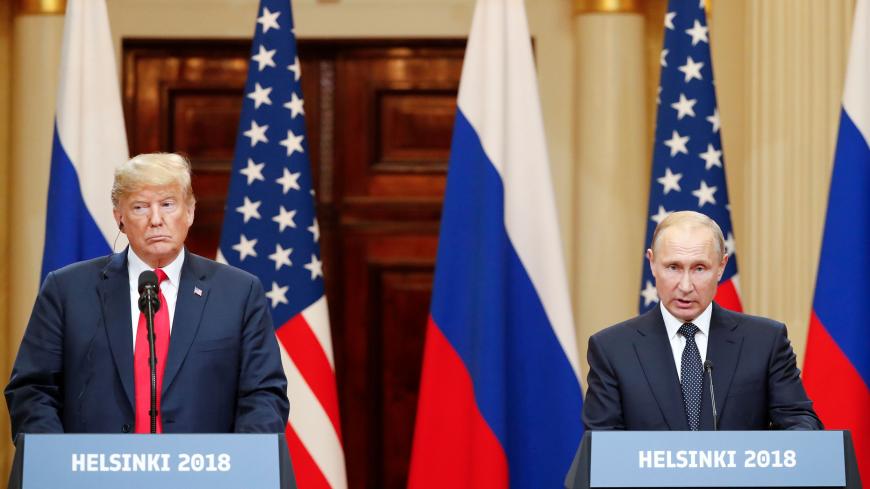 MOSCOW — In the wake of the Helsinki Summit between US President Donald Trump and his Russian counterpart Vladimir Putin, Moscow has made a series of moves regarding the situation in Syria aimed at reassuring allies and delivering on guarantees made to each. In this context, Putin’s special envoy on Syria Alexander Lavrentiev visited Tehran July 19 for meetings with figures from the Supreme National Security Council of Iran, including the council's Deputy Secretary-General Saeed Irvanii.

In a meeting that lasted more than two hours, the Russian envoy briefed his Iranian colleague on the results of the Helsinki summit vis-a-vis the situation in Syria and discussed prospects for further coordination of activities in the country. At the July 16 summit, Trump and Putin spoke at length about security in the Golan Heights. During a press conference following their one-on-one meeting, Putin noted that Moscow sees the treaty of 1974 about the separation of Israeli and Syrian forces as a way “to bring peace to [the] Golan Heights, bring a more peaceful relationship between Syria and Israel, and also to provide security for the state of Israel.”

Meanwhile, after a major victory over opposition militants in the south who have agreed to surrender terms, President Bashar al-Assad is close to recovering control of the Syrian border with the Israeli-occupied Golan Heights.

Prior to his visit to Iran, on July 16 Lavrentiev said, “There aren’t and never have been Iranian forces in the south of Syria.” Yet he dodged the question when asked whether he thought there were Iranian advisers in the area.

“The fight with terrorists continues. As far as the de-escalation zones are concerned, we continue working on reconciliation of the warring parties with the participation of moderate groups,” Lavrentiev added.

Russian Ambassador to Syria Alexander Kinshchak was more precise on this matter, saying three days later, “There are no pro-Iranian armed units in the south of Syria.”

"This issue has already been settled. I have repeatedly heard from different sources that there are no pro-Iranian, Shiite units in the south of Syria," he added.

Russia’s outreach to Iran following Putin’s meeting with Trump and thorough discussions of Israeli security concerns comes as part of Russia’s own checks-and-balances approach toward the complex Syrian equation.

Prior to the Helsinki meeting, Russia had been expected to deliver primarily three things: guarantee Israel’s security from what Prime Minister Benjamin Netanyahu sees as a growing Iranian presence on the Syrian-Israeli border, curb Iranian influence in the rest of Syria and open up to some kind of engagement with the United States and interested European states — all to ensure America’s own military pullout from Syria.

Hence, the statements and moves Russian officials have made in the few days following the Helsinki meeting are meant to signal that Moscow has been delivering on what appears to have been its promises to each party: security for Israel, cooperation with Iran and engagement with the West.

On July 19, Al-Monitor cited statements by Russian Ambassador to Iran Levan Dzhagaryan expressing Moscow's preoccupation over the possibility of a military confrontation between Israeli and Iranian forces in Syria. Dzhagaryan also alluded to Russia’s way of approaching Iranians.

“[Iran] is not a country where you can apply pressure. It is a large nation and pursues an independent foreign policy. Work with Iranians can only be done through persuasion, and pressure on Iran will get you the opposite result,” Dzhagaryan said.

Russia, therefore, is moving steadily toward gradual implementation of its vision for the Golan Heights, while conveying to Iran that these policies are the least painful solutions to the interests of the Islamic Republic when measured against disincentives of a larger regional war. Moscow also seeks to persuade Tehran that its proposal on the Golan Heights doesn’t mean Russia prioritizes Israel over Iran, nor does it undermine Russian-Iranian cooperation against what both deem terrorists in Syria. Between the lines, Moscow thus signals the Trump administration it is capable of ensuring Israeli security from what Trump and Netanyahu see as the biggest threat.

Iran understandably appears to be wary of Russia flirting with the Israelis and Americans. In this particular situation, however, it has a rather limited number of options: either agree to the vision that Moscow proposes — albeit with some amendments — or wave it off and face military escalation in addition to sanctions and pressure from within.

To a large extent, the same holds true for Israel and the United States. They are skeptical over Russia’s ability to deliver on this policy. Yet since Israel’s security is arguably the only thing Trump really cares about vis-a-vis the conflict in Syria, he may accept the Russian vision for the Golan Heights and the southern de-escalation zone, since it virtually relieves him from yet another headache in the Middle East he’d otherwise have to deal with. It’s more complicated with the Israelis, but since they genuinely count only on themselves anyway, the Russian proposal gives them just another yet important “security layer” against Iran.

Another track Putin mentioned in Helsinki that Russia was open to pursuing is coordination of the Astana process and “small group” activities. While it’s not clear whether the latter is ready for such engagement, representatives of the former are scheduled to meet in Sochi July 30-31 to discuss the issue of refugees.

In parallel, a new meeting between the heads of Russia, Iran and Turkey is also being prepared. Putin’s foreign policy aide Yury Ushakov said the exact date has not been set as of yet, but diplomatic sources have it the trilateral summit will most likely occur at the end of the summer or in early fall. This will be the third meeting between Putin, Iranian President Hassan Rouhani and Turkish President Recep Tayyip Erdogan: Previously, the trio met first in Sochi in November 2017 and then in Ankara this past April.

Finally, in Helsinki, Putin also signaled Moscow’s readiness to engage with regional and Western states on humanitarian efforts. As part of the effort on July 18, Moscow announced the establishment of the Center for the Reception, Allocation and Accommodation of Refugees. The center, which the Russian Defense Ministry created together with Syrian authorities and whose activities will also be coordinated with Russia’s Foreign Ministry, will “monitor the return of all temporarily displaced people and Syrian refugees from foreign countries to their places of permanent residence, the delivery of humanitarian aid, medical aide and construction materials.”

Moscow won't disclose the exact coordinates of the center for security reasons, but Russian sources say the structure will be located “either in Damascus or in some other big city in southwestern Syria.” The center, above all, is yet another tool Russia now has over the reconstruction and reconciliation process in Syria — the next big stage in Russia’s Syria campaign. Aware of potential complications of the Assad government as a sole decision-maker in the process, Moscow thus seeks to both restrain the powers of Assad in this process and create conditions on the ground for other potential donors to come and negotiate terms of their contributions. Three years into the Middle East, Russia has been mastering some of its own “Oriental” bargaining practices.