The Palestinian Ministry of Education announced a plan to recognize certificates issued by unaccredited universities established in the wake of the 2007 division in the Gaza Strip, allowing graduates to pursue higher degrees and work in public sector jobs. 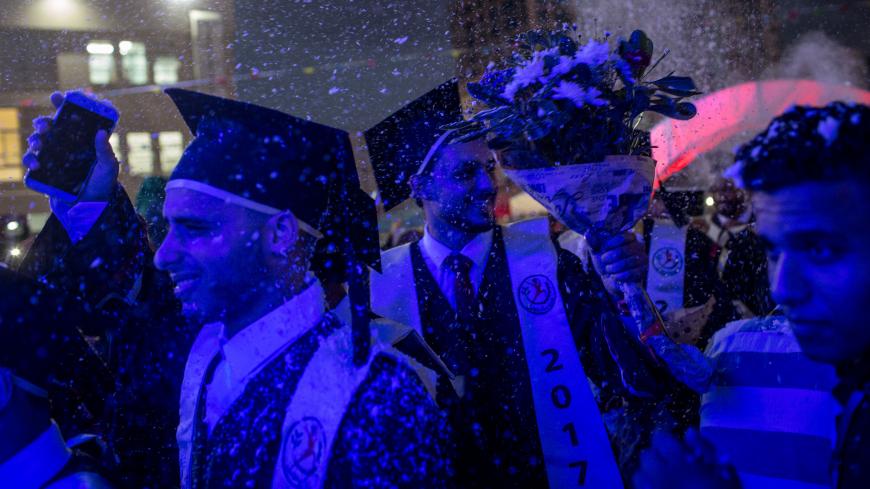 GAZA CITY, Gaza Strip — The Ministry of Education and Higher Education of the Palestinian national consensus government announced in a statement March 13 the first step of a plan aimed at solving the problem facing graduates of universities that were established following the 2007 Palestinian division and were not recognized by the ministry in the West Bank. This step consists of approving certificates issued by these unrecognized universities and colleges in the Gaza Strip. Further steps will be taken before the start of the academic year in September, according to the statement.

On March 14, dozens of holders of bachelor's degrees rushed to the headquarters of the Ministry of Education in Gaza to have their certificates certified.

Students who graduated from universities and disciplines established during the Palestinian division hold diplomas that are not recognized by the ministry in the West Bank city of Ramallah. This prevents them from entering the labor market and working in government departments or associations in Palestine and around the world. It also prevents them from applying to graduate programs that require a certificate approved by the Education Ministry.

According to the ministry’s statement, only two categories of students are to benefit from the decision. The first category includes graduates of university programs approved by the ministry's Accreditation and Quality Assurance Commission (AQAC) in the West Bank and recognized by the Ministry of Education in Gaza. The second category includes students who had a minimum high school GPA of 2.3. Such accreditation is to go in accordance with the exceptions issued by the Ministry of Education; during the period of division, the ministry in Ramallah allowed fewer than 20 students who did not have a GPA of 2.3 to study in recognized universities.

Of note, the Palestinian division led AQAC to adopt different approval standards in Ramallah and the Gaza Strip.

These universities were founded in the wake of the Hamas takeover of the Gaza Strip, and they are unrecognized because they were established in the absence of a legitimate authority. Tens of thousands of students attended these universities because they offered unique specialties that were not found elsewhere, such as police science and law offered at Ummah Open University.

During the Palestinian division, while the Ministry of Education approved some university programs adopted by unrecognized universities, it still refused to recognize the certificates held by graduates of such universities.

“The number of students benefiting from this recognition will reach 5,000 students, to which another 8,000 graduates will be added before the start of the next academic year in September,” Yazuri said. “The decision involves students who have already graduated."

Although the minister’s decision aims to address the status of unrecognized universities, Ummah Open University in Gaza will not be included in the decision because it accepted students with a minimum GPA of 2.0, and it has not gotten any authorization for its programs from AQAC in Gaza.

Raafat al-Hor, the acting president of Ummah Open University, told Al-Monitor, “The university rejects the ministry’s exclusion of Ummah Open University and its refusal to recognize any of the 12 programs offered by the university. The university met all the conditions and criteria set [by AQAC] for the establishment of universities. It also obtained the approval of the Palestinian Legislative Council and the Ministry of Education and Higher Education in Gaza in 2008, and was recognized by a number of Arab educational organizations such as the Arab Network for Open and Distance Learning, Association of Arab Universities, Federation of the Universities of the Islamic World and Arab-ACRAO [Association of Collegiate Registrars & Admissions Officers]; 7,000 students have graduated from this university and 5,000 are currently studying there.”

Raba Hussam, a 22-year-old student in the faculty of dentistry at the University of Palestine, told Al-Monitor, “I spent five years studying dentistry. I faced all kinds of challenges and I defied my parents and friends who wanted me to find another university that offers the same program. I refused to bow to such pressure. I graduated two months ago hoping that a decision would eventually be issued by the minister to solve the issue of unaccredited certificates and to obtain a master’s degree or a doctorate in an Arab or European country.”

The faculty of dentistry was established during the Palestinian division without an approval from AQAC in Ramallah. However, on April 4, 2017, AQAC suddenly decided to approve the program, which makes graduates of this faculty among the categories that can benefit from the ministry’s decision.

In addition to new specializations, these unaccredited universities also offered other benefits such as cheaper tuition fees. Plus, maritime navigation graduates at Ribat University College, which is affiliated with the Ministry of Interior in Gaza, get a job in the police force upon graduation.

Aya Islim, the spokeswoman for the student movement for unrecognized Palestinian universities in the Gaza Strip, told Al-Monitor, “The decision of the Ministry of Education and Higher Education is long overdue. Over the last 10 years, students have lost many job opportunities and failed to pursue master’s degrees both inside Gaza and abroad. We are still organizing protests and demonstrations in front of the headquarters of the Ministry of Education to ask the ministry to recognize all the universities and graduates who fell prey to the division.”

Mohammad Meqdad, the dean of the faculty of commerce at the Islamic University in Gaza, told Al-Monitor, “While the ministry’s recognition of such certificates will contribute to opening up employment opportunities at official institutions both inside Gaza and abroad, it will also increase competition among graduates applying for jobs amid difficult economic conditions currently plaguing Gaza.”