Tunisians are looking forward to the first municipal elections since 2011 amid expectations that independents and young people will achieve major results. 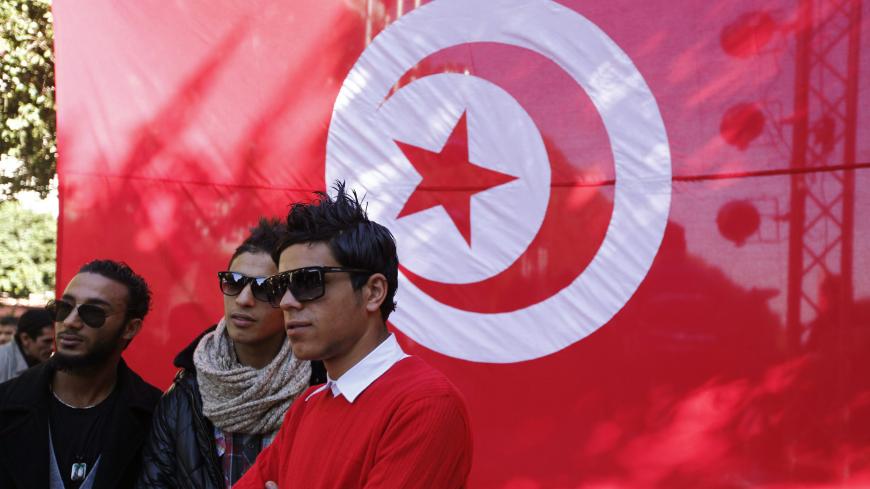 Youths pose for a photo in front a Tunisian flag during celebrations of the second anniversary of the Tunisian revolution at Avenue Habib-Bourguiba in Tunis, Jan. 13, 2013. - REUTERS/Anis Mili

TUNIS, Tunisia — Tunisia is getting ready to hold its first municipal elections since the 2011 revolution. While the general poll is scheduled for May 6 (with soldiers and members of the security services set to vote Apr. 29), past postponements have raised fears among activists of further delays.

The first phase of preparations, during which the candidate lists were submitted to the Independent High Authority for Elections (ISIE), had several surprises, including a large number of youths registering as candidates. Over 75% of registrations were candidates under the age of 45, while over 50% were under 35. The review of candidacies started on Feb. 15 and ended Feb. 22.

Member Anis al-Jarboui expressed the ISIE’s surprise with the high number of young people who registered to run. “This increased number of candidates foreshadows political changes in the coming years,” he told Al-Monitor. “The candidacy of independent figures somewhat changed the scene, despite the prevalence of party lists. The nature and structure of candidacies set municipal elections apart from legislative and presidential elections.”

ISIE statistics indicate that women candidates make up 47.46% of the field.

Jarboui told Al-Monitor that 51% of the electoral lists are party lists compared to 41% independent and 8% coalitional. More than 1,800 individuals with special needs submitted their candidacy. The municipal elections law stipulates the presence of at least one candidate with a physical disability among the first 10 candidates on each list, and the lists must be divided equally between men and women.

Ennahda and Nidaa Tounes are at the top with the highest number of lists, with each of them submitting 350 lists in the municipal elections, equivalent to the number of municipalities in the country. According to ISIE statistics, the opposition’s Popular Front follows with 132 lists, Machrouu Tounes with 84, the Democratic Current (Ettayar) with 72, Al-Irada Party with 47 lists and finally Afek Tounes with 46 lists.

Mounia al-Rabhi, a candidate on an independent list in Sidi Bou Zid province, told Al-Monitor, “The municipal elections are the cornerstone of local governance to improve the conditions Tunisians live in. For that reason, voting is important to ensure the implementation of local democracy with transparency for the first time in Tunisia.”

She added, “Municipal elections will give youths their first chance to change the political decision-making authority.”

Hadi al-Zarawi, 34, is a candidate on the opposition’s Popular Front list in As Sanad in the southwestern governorate of Gafsa. “Tunisians’ lack of trust in the political elite and minimal political awareness have pushed youth to refrain from joining parties,” he told Al-Monitor. “Youth should be motivated and urged to participate in elections through purposeful, intellectually stimulating seminars. Youth participation is [crucial to] participatory democracy.”

For his part, political and media analyst Youssef al-Wasalati told Al-Monitor, “This is the first time that the numbers [of registered youth] have come as a shock to the parties and political blocs in Tunisia. What happened during the first phase of municipal elections is enough to mean a public rejection of the [current] political situation and parties.”

He added, “The political elites have lost much of their credibility after failing to address youths’ concerns and respond to their aspirations and expectations, with the rising poverty and unemployment.”

Bashir Boujadi, a member of the Tunisian Union of Industry, Trade and Handicrafts, told Al-Monitor, “We hope the youths will pump fresh blood into the Tunisian economy, contribute to meeting youths’ demands and pitch new ideas to create job opportunities.”

Boujadi further noted, “The political parties should pass on the torch to the Tunisian youth who led the revolution so that they can steer the country to safety and pull it out of its economic and political crises.”

Hafiz Hafiz, a senior member of the Tunisian General Labor Union (UGTT), told Al-Monitor, “Elections are a chance for workers to choose their representatives who will defend their rights. We hope the elections are held in an organized manner. The UGTT will support each youth fighting to defend the poor.”

Polling companies like the IRI expect independent candidates to do well in the upcoming municipal elections in May.

The competition will be heated among the parties. The latest polls from Sigma Conseil Company published in the local Al-Maghreb newspaper issued Feb. 13 showed Nidaa Tounes leading the ruling coalition. Nidaa Tounes is expected to win 29.7% of votes placed for candidates affiliated with parties. Meanwhile, Ennahda, which is part of the governmental coalition, is expected to come in second with 28.9%. The Popular Front came in third with 9% and the Democratic Current is in fourth place with 6.1%. The polling included a sample of 2,000 people above 18 who live in cities and rural areas.

The Tunisia cabinet already includes many young names. Prime Minister Youssef Chahed is only 42, and the spokesman for the Cabinet Iyad al-Dahmani is only 45.