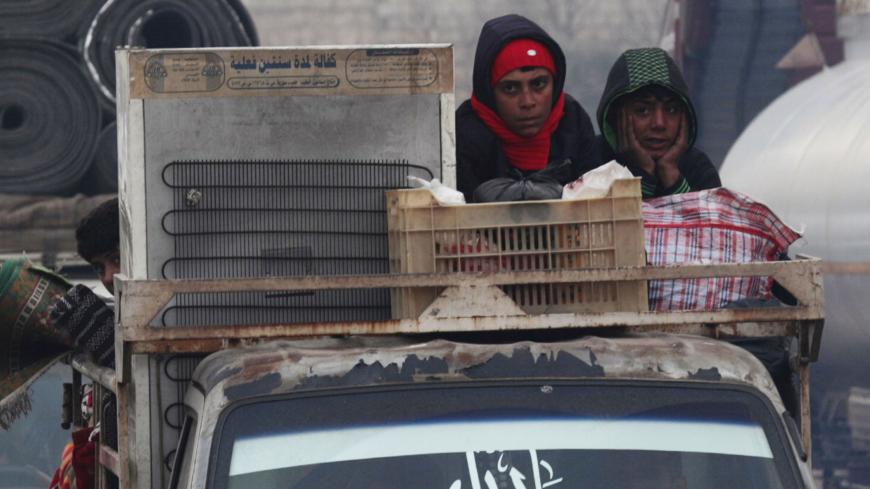 "Russia is in full compliance with the Sochi agreements on the Idlib zone. At the same time, we regret to say that the situation is far from perfect," Russian President Vladimir Putin’s spokesman Dmitry Peskov told the press Jan. 31.

He added, “A large number of terrorists remain in the area and continue aggressive attacks on the Syrian army and Russia’s Khmeimim air base. It causes us huge concern."

Why it matters:  On Jan. 29, Turkish President Recep Tayyip Erdogan lashed out at Russia’s actions in Idlib and argued the Astana process had become “moribund.” Erdogan said Moscow “doesn’t comply” with the 2018 Sochi agreement establishing a demilitarized zone around the area. Al-Monitor’s Ezgi Akin observed this is the first time perhaps since 2016 the Turkish president had openly criticized Moscow.

On Jan. 31, speaking in Ankara, Erdogan doubled down on his warnings and concerns over a new influx of migrants, threatening that Ankara may resort to military power in order to avert “new threats near its borders.”

Erdogan alluded to previous cross-border operations in northern Syria, which at the time were coordinated with Russia and primarily targeted Kurdish militias. The stark difference this time is that the Turkish president is after the Russia-backed Syrian army, which may create a whole new set of risks for each side involved.

Keep calm and carry on:  Moscow operates on the legal and moral premise that the Idlib memorandum between Russia and Turkey doesn’t apply to terrorist groups, only “moderate opposition” groups. Since Turkey — Russia’s argument goes — has so far failed to separate the “moderate wheat from the jihadist chaff,” there’s every reason to apply force to those groups Moscow and especially Damascus see as “terrorists.” As Al-Monitor reported earlier, Syrian President Bashar al-Assad has been pushing Moscow for full control of Idlib, and now that previous Russian and Turkish compromises seem to have been exhausted, a new set of realities on the ground is needed to develop a new deal.

Yevgeny Satanovsky, head of the Moscow-based Institute for the Middle East who is known for his ties with Russian security, argued the trigger for the recent rise in Russian-Turkish tensions is the latest activity of the Idlib-based militants.

“About 25,000 al-Qaeda-type terrorists who’ve been sitting in their ‘nests’ have recently decided to take action — shelling Aleppo and other towns. … They broke the [Russia-Turkey] agreements, Erdogan pledged to not let them out [of the ‘nests’]. [Where] there are Turkish posts, civilians are not being hurt. The perimeter of the zone is patrolled by Russian and Turkish military, and the Turks themselves act adequately,” Satanovsky noted Jan. 30.

“But what happened over the last day the militants tried to break through the circle the Syrian army created [with its offensive]? [The Syrian army] hit eight tanks, 49 jeeps, 15 armored infantry fighting vehicles, and seized trucks loaded with explosives. So it’s just crazy to hear that some foreign ministers — including [US Secretary of State Mike] Pompeo — are crying wolf over the al-Qaeda guys sitting there,” he argued.

What’s next:  When things get hot between Moscow and Ankara, Putin and Erdogan tend to turn it into “manual operation mode” — either by having a direct phone call or a personal meeting. The fact that Erdogan went public in his criticism of Russia suggests the parties either have so far run out of backstage options to deal with the issue or the Turkish president wants to reinforce his concerns to Putin over the domestic pressure he may be facing should a new flow of refugees hit Turkey.

Russians, on the other hand, have been demonstratively cordial in the public rhetoric vis-a-vis Erdogan. They signaled concerns for the militants’ attacks on Syrian and Russian forces but also conveyed the desire to settle the matter without military confrontation with Turkey.

Know more:  Keep up with the developments with more details from both sides by following Al-Monitor’s Russia-Mideast page and Turkey Pulse.