The White House disclosed Jan. 28 details of a call between President Donald Trump and his Turkish counterpart, Recep Tayyip Erdogan. 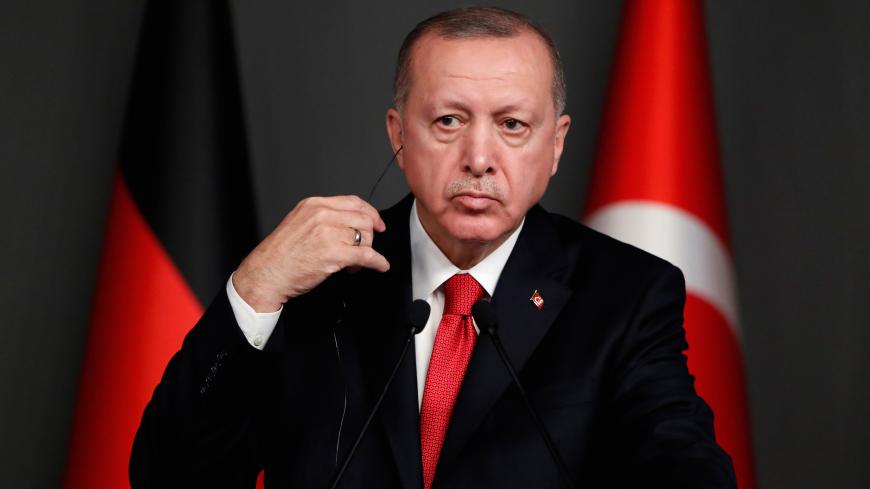 The White House disclosed on Jan. 28 details of a call between President Donald Trump and his Turkish counterpart, Recep Tayyip Erdogan, noting the two leaders discussed a wide array of contentious issues troubling the two NATO allies. Erdogan’s office issued its own readout of the call, framing it as a “courtesy call” in the wake of the earthquake that struck eastern Turkey over the weekend. The Turkish statement downplayed the geopolitical issues the White House said Trump raised, ranging from Libya to tensions in the eastern Mediterranean to Syria.

Why it matters:  White House Deputy Press Secretary Judd Deere said that Trump and Erdogan discussed “the need to eliminate foreign interference and maintain the cease-fire in Libya.”

Erdogan announced earlier this month that Turkish troops are deploying to Libya to support the internationally recognized government based in Tripoli as it fends off an assault from Khalifa Hifter, a warlord backing a rival government in the east. Ankara has also deployed some 2,000 Syrian rebel fighters to Libya to push back against Hifter, who enjoys military backing from Egypt, the United Arab Emirates and Russia. The United States recognizes the embattled United Nations-backed government but opposes Turkey’s military buildup in the volatile country. And Trump lauded Hifter’s “significant role in fighting terrorism and securing Libya’s oil resources” in a phone call last year, shortly after the eastern warlord began the Tripoli offensive.

Deere said that Trump “also highlighted the importance of Turkey and Greece resolving their disagreements in the eastern Mediterranean.” The president signed a law last month sidelining Turkey in its maritime dispute with Cyprus as Ankara drills for natural gas off the coast of the disputed island.

The White House did stress one point of consensus between the two allies, as “the leaders agreed that the violence being carried out in Idlib, Syria, must stop.” Turkish-backed rebels are fighting Syrian President Bashar al-Assad and Russia in their ongoing offensive on Idlib, which has killed more than 1,000 civilians and displaced some 40,000 others.

What’s next:  The United States and Turkey must still contend with myriad contentious issues, including Ankara’s purchase and testing of the Russian S-400 missile defense system against US-made aircraft.

Know more:  Follow Al-Monitor to stay abreast of the escalating foreign military buildup in Libya. Egypt has recently redeployed its aerial assets closer to the Libyan border in an apparent response to Turkey’s deployments. Al-Monitor has the story here.