The fall of the Syrian town of Qusair to regime forces will likely have consequences for Lebanon. 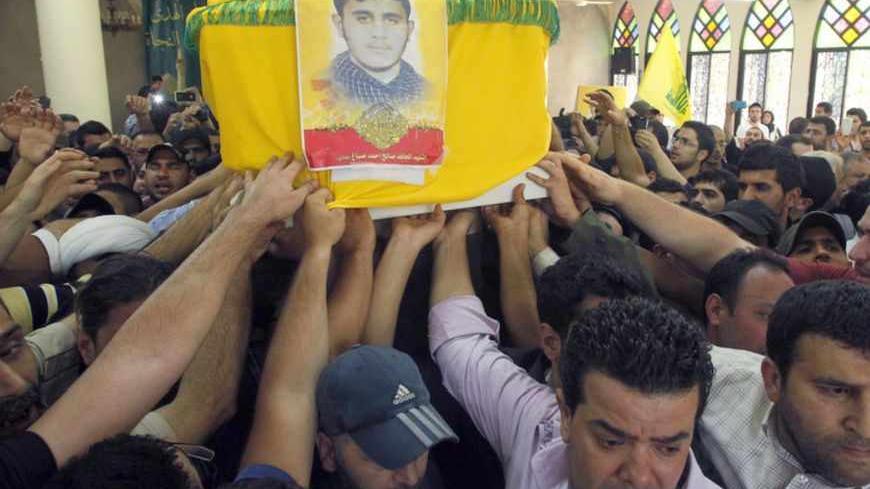 Supporters of Hezbollah and relatives of Saleh Ahmed Sabagh, a Hezbollah member, carry the coffin during his funeral in the port city of Sidon, southern Lebanon, May 22, 2013. - REUTERS/Ali Hashisho

The postponement of Lebanese elections might be one of the first repercussions of the Qusair battle raging in Syria.

The entry of military forces loyal to President Bashar al-Assad into this last insurgent stronghold in Homs’ countryside seems to have led, in practical terms, to a conviction by all Lebanese factions that parliamentary elections must be canceled or postponed to a yet undetermined date. The effects of this Syrian military battle on the Lebanese political scene can be explained by two main factors: The first has to do with developments on the battleground, while the second is political and concerns electoral calculations.

Militarily, the fall of Qusair led to a new round of violence and gun battles in the city of Tripoli, north Lebanon’s capital and the second largest city — after Beirut — in the land of the Cedars. It should be noted here that there is a direct causal relationship between the two fronts, for the Qusair battle, despite its being part of the war between the Syrian regime and its opponents, leaves an impression among Lebanese sectarian factions that the alliance between minority non-Sunni groups has vanquished the city’s Sunni insurgents. Retaliatory reactions to this development were expected to take place in two probable locations: Tripoli or western Iraq. Repercussions were immediately felt in the former, while the latter still is in a state of worried anticipation.

But, most important on the Lebanese front now, was that the latest round of violence in Tripoli, perpetrated by Sunni neighborhoods against the besieged Alawite neighborhood in the east, was the fiercest during the past five years of tension the city has experienced. This violence has, until the writing of this article, led to the deaths of 11 people and the wounding of 145. This locus of uncontainable military action, where neither side is capable of victory, has rendered impossible the holding of parliamentary elections in the region, and other adjoining Sunni areas, all the way to the district of Akkar, which is situated on Lebanon’s northern border with Syria and is divided into three electoral districts.

The electoral law currently in force, according to which elections are supposed to be held, stipulates that elections take place in all electoral districts without exception, in one single day. Furthermore, the electoral parity between both sides of the Lebanese divide makes it intolerable for either faction to accept losing even one solitary parliamentary seat; what then of three districts represented by 18 seats?

This fact will force all sides to recognize that elections cannot be held on their legally prescribed date prior to June 20, especially considering that the Lebanese Interior Ministry has acknowledged its inability to conduct them in the areas where armed clashes are currently taking place.

The other reason that might push Lebanese factions toward postponing elections is purely political, and has to do with the electoral expectations of both sides.

Gen. Michel Aoun’s alliance with prominent Shiite factions might believe that it is in its best interest to wait and see because the military developments in Syria — especially after Qusair’s fall and other subsequent developments on the ground — seem to be in its favor. These developments may, at the very least, convince Druze leader Walid Jumblatt of the need to soften his charge against the Assad regime, while forcing him to espouse a more moderate position, all of which might be beneficial to the Aoun-Shiite alliance.

This eventuality would mirror Jumblatt’s actions of January 2011, when he abandoned his ally, former Prime Minister Saad Hariri, and entered into a new alliance with the Shiites and Aoun. This led to the formation of Najib Mikati’s government, which remained in place until Mikati resigned on March 22. An analysis of Jumblatt’s latest statements seems to point to such a transformation beginning, for he has clearly reduced his criticism of Assad and focused on what he called the protection of Lebanon’s stability.

Yet, in the worst of cases, the Aoun-Shiite alliance, might become convinced that settlement of the Syrian crisis is no longer feasible without the participation of Moscow and Tehran. This is an eventuality that guarantees this alliance’s prominent position in any future Syrian solution, and improves the alliance’s negotiating position inside Lebanon, both on electoral and governmental issues.

In contrast, the rival alliance led by Hariri considers that Qusair’s fall into regime hands  might lead to opposite results; whereby regional and international forces opposed to Assad’s regime would take political and even military steps to restore the esteem of the armed Syrian opposition, which they back.

They would do this by dealing  Assad an equally painful blow, either militarily on the ground, or politically through new diplomatic or United Nations measures. In any case, the team Hariri alliance might also think that the anti-Assad front will not tolerate this political defeat suffered by the opposition in Qusair. This was apparent in the latest statements issued by Turkish Prime Minister Recep Tayyip Erdogan. As a result, the Hariri coalition could  deem that it is in its interest to also postpone elections until the Qusair loss is assimilated and its results and repercussions dissipated, both in Lebanon and Syria; or until the presumed international revenge for the fall of the city matures, which would lead to better Lebanese electoral conditions for the Hariri coalition.

Those then were two opposite and contradictory accounts of the same Syrian military battle, leading to a single political result in Lebanon: the postponement of parliamentary elections until a future date determined by imminent and much more complicated considerations.