Hezbollah Secretary-General Hassan Nasrallah has explicitly acknowledged his party’s role in Syria, and sources describe the battle for Qusair. 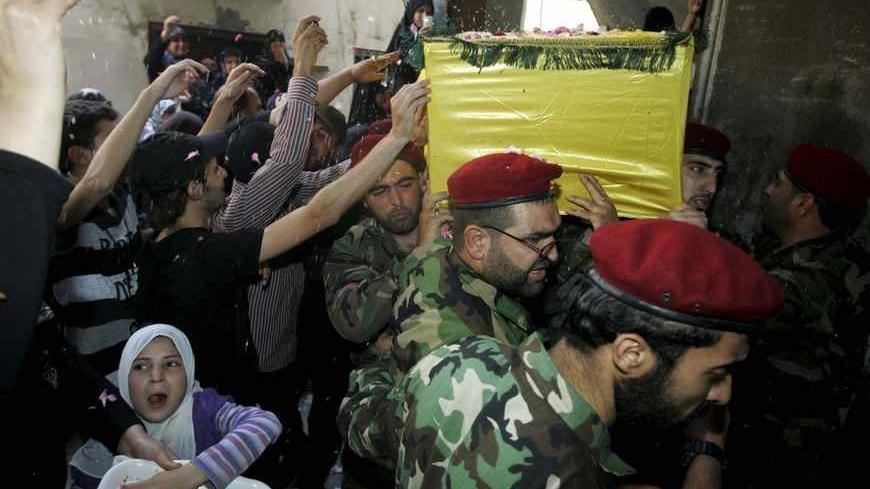 Supporters of Hezbollah throw rice on a coffin at the May 26, 2013, funeral in Beirut of a Hezbollah fighter who died in the Syrian conflict in Ouzai. Hezbollah and Syrian government troops recently launched a fierce assault aimed at driving Syrian rebels out of Qusair, a strategic city close to the Lebanese border. - REUTERS/Issam Kobeisy

Events have rapidly progressed lately on the Lebanese Shiite scene, beginning with the public admission by Hezbollah of its military participation in the battles raging in the Syrian city of Qusair. In a speech given Saturday, May 25, on the anniversary of the Israeli withdrawal from Lebanon in 2000, Hezbollah Secretary-General Hassan Nasrallah explicitly acknowledged that Hezbollah was involved in the Syria war, fighting on President Bashar al-Assad’s side against what Nasrallah called the takfiris, who hail from a number of Arab countries, Balkan states or even from Asia Minor. These events go all the way to the firing of two rockets, by unknown perpetrators, on a neighborhood of Beirut’s Shiite-dominated southern suburb, considered Hezbollah’s stronghold in the Lebanese capital.

In light of these developments, sources close to Hezbollah began to more openly and transparently talk about the military battles under way close to Lebanon’s northeastern border, which, until a few days ago, was a taboo subject. In this context, those sources confirmed to Al-Monitor that Hezbollah’s losses in Qusair have in fact totaled 40 dead, in addition to a larger number of wounded. The sources explained that most of these casualties did not include “elite fighters” of Lebanon’s pre-eminent Shiite organization, as anti-Hezbollah media sources have publicized during the last few days.

The sources continued on to say that regular combat forces belonging to Hezbollah succeeded in reaching Qusair’s municipal building in the center of the city May 19. As is the case in all military operations, once the initial incursion into the heart of enemy territory is achieved and the advance is complete, the incursion strike force cedes its role to support units that are called in to secure the area, thus allowing the strike force to move on to its next target. But sources close to Hezbollah told Al-Monitor that what was overlooked was that the support units called in that evening were predominantly composed of non-professional fighters, mostly volunteers or enthusiasts who joined the main fighting forces stationed in the rear, on the Lebanese border region of Hermel, close to the battleground. According to our sources, these fighters belong to a generation of men who did not see action in the July 2006 war that Hezbollah fought against the Israeli army.

Three tragic surprises awaited those fighters as they entered Qusair’s center. The first was sophisticated booby-traps Syrian opposition militants had planted on each street corner they vacated. The second was the emergence of opposition fighters from hiding places they had prepared underground in secret tunnels dug a long time ago. And the third was the effectiveness of Syrian opposition snipers, armed with very advanced rifles that allowed them to pick off a number of Hezbollah fighters from long distances, and from camouflaged fortified positions that facilitated their task.

The same sources further confirmed that Hezbollah’s fighters managed, on the Monday that followed the ambush (May 20), to adapt to and overcome what had occurred, and initiate the second phase of their battle there, which effectively began two days after they entered the city.

The nature and objectives of this second phase were the subject of internal debate, with two different tactics being weighed. The first called for all of Qusair to be completely secured first, and then to move east and north in order to take control of the last remaining villages separating Qusair from Homs. The second tactic called for bypassing whatever pockets of insurgents remained in Qusair and securing the only road open for an opposition withdrawal through the villages of Dabaa and Arjoun toward the east and north. The first choice allowed the last remaining insurgents holed up in Qusair’s northeast to withdraw toward Homs, thus giving them a chance to flee in exchange for a quicker end to the battle and  allowing the attacking forces to completely control the city. On the other hand, the second option would lead to the complete encirclement of the insurgents, but meant the attackers might have to stand ready to fight them to the last man.

The same sources added that a decision was seemingly taken to adopt the first tactic, as was evident on the ground in the last two days. News reports indicated the occurrence of small skirmishes on the road north from Qusair toward Homs when insurgents attempted to covertly withdraw and sneak out of Qusair in order to join their comrades elsewhere.

According to our sources, Hezbollah’s fighting units carefully strove to prevent Syrian opposition fighters from withdrawing toward Lebanese territories in the south and southwest. The sources explained that Hezbollah never, for one instant, worried about Syrian insurgents or Lebanese pro-Syrian opposition militants. Its main attention throughout the battle was aimed at those that it characterized as takfiri militants. Hezbollah had received information from Lebanese authorities that a few hundred of those takfiris had in fact previously managed to reach Palestinian refugee camps inside Lebanon, and had, for the most part, taken up positions in the Ein el-Hilweh camp located on the eastern outskirts of South Lebanon’s capital, Sidon. A smaller number of them had reached the Sabra and Shatila camps, adjacent to Beirut.

These camps are sensitive because Ein el-Hilweh is located in a city considered part of the vital and strategic connecting road between Hezbollah’s two main strongholds of Beirut and southern Lebanon. Sabra and Shatila, on the other hand, are adjacent to the predominantly Shiite southern suburb of the capital, Beirut. This explains the sensitivity of the issue relating to those extremists’ location, and the security and intelligence alert aimed at monitoring their every move, particularly following the launching of two rockets Sunday morning, May 26, toward one of the southern suburbs’ neighborhoods.

During the days of Syria’s tutelage over Lebanon, the Lebanese used to loathe hearing a famous quote attributed to former Syrian President Hafez al-Assad, who constantly repeated that Syria and Lebanon were one and the same people in two different countries. Eight years after the end of that period and the Syrian army’s withdrawal from Lebanon, the Lebanese are now discovering that what is taking place in Syria and Lebanon is but the same war being waged in two countries.