The aim of the battles raging on the Syria-Lebanon border near Qusayr is directly tied to the war in Syria, writes Jean Aziz. 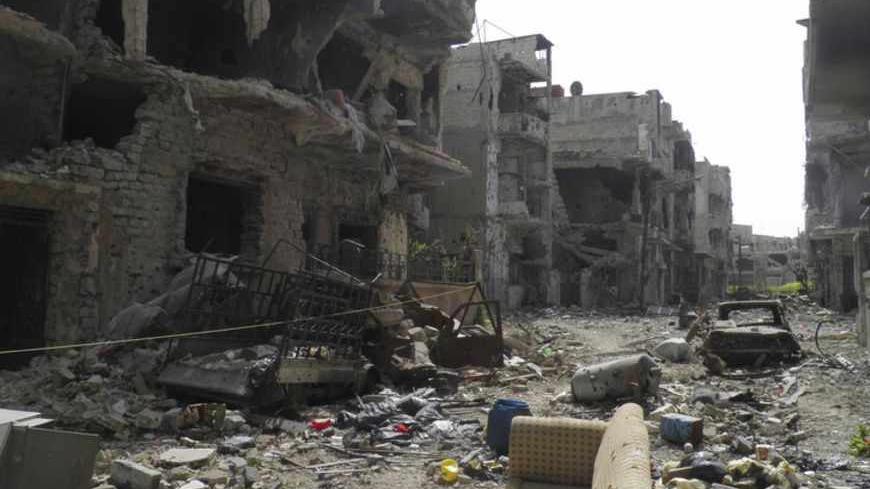 A view shows debris along a street of damaged buildings by what activists said was shelling by forces loyal to Syria's President Bashar al-Assad in Homs, April 8, 2013. - REUTERS/Thair al-Khalidi/Shaam News Network/Handout

On March 8, 2013, Al-Monitor published an article titled Jabhat al-Nusra and Hezbollah In First Confrontation. The article said that the Syrian army withdrew from a long border zone between Lebanon and Syria and predicted that the zone would become a military contact line between the Lebanese Shiite organization Hezbollah on its southwestern side and Sunni jihadist organizations on its northeastern side. This is exactly what has been happening in that area for days. And we now have information that the next few days could witness a qualitative development on that front.

“It is the battle of Qusayr, and by extension it is the battle of Homs city and Homs province.” This is how military experts from both sides describe the conflict happening in Lebanon’s northeastern corner bordering Syria. Preparations for that battle started about a month and a half ago, as reported in Al-Monitor. In early March, the Syrian army withdrew from the al-Nabak area, which faces the aforementioned zone. Regime loyalists said that it was a tactical move aimed at drawing out Sunni “jihadists” of their hiding places, as a prelude to strike at them. They were holed up in some neighborhoods in the nearby city of Homs and its countryside.

But regime opponents said that the aim of the withdrawal was twofold: first, to redirect soldiers to nearby fronts, especially after signs that the battle for Damascus was approaching; and second, to deploy Hezbollah fighters, from among Lebanese and Syrian Shiites, to the area vacated by the regime army.

Whatever the claims, the events on the ground saw qualitative developments, the most important of which was the Syrian army participating in two major battles around Damascus. First, it gained control of the town of Daraya, southeast of the capital. Daraya has been a stronghold of armed oppositionists for more than a year. Although opposition sources say that the regime did not actually gain control of Daraya, the regime’s bombardment of the town has completely destroyed it and made it unfit to host oppositionists, who had to flee to save the town from destruction. Second, the Syrian army succeeded in encircling the Eastern Gouta region, which is located east of the capital’s airport. Those two developments have allowed the regime to regain the initiative in Damascus. Since July 2012, Damascus was subject to two attempted attacks.

When the Syrian army was advancing southeast of Damascus, important developments happened northwest of the city. In the weeks that followed the withdrawal of the Syrian army from the border zone, a series of battles erupted there between the Free Syrian Army, Jabhat al-Nusra and other jihadist movements on the one hand, and regime loyalists on the other. In an attempt to justify the military changes on the ground, the opposition was quick to point out that they were fighting Shiites from Lebanon, Iraq and even Iran. The loyalists, on the other hand, said that the withdrawal of the Syrian army from the area happened after thousands of area inhabitants were recruited by the regime as part of the “popular committees” and that most of those have already had compulsory military training. And since they are from the area, they know its geography in detail, contrary to the jihadists who came from abroad. All those factors resulted in opposition gunmen receiving a severe blow.

Here, too, whatever the truth, it remains clear that pro-regime forces have made progress at more than one point on that important front. The latest regime progress was to gain control of the strategic area of Tall Mando (aka the Heights of Prophet Mando) northwest of Qusayr, which seems to be the true goal of the battle on that front.

Qusayr has 50,000 inhabitants and is located 35 kilometers [about 22 miles] southwest of Homs. It holds the strategic routes between Homs and the Syrian coast to the west and Lebanon to the south. Controlling Qusayr would allow access to several strategic areas in upcoming battles. If regime loyalists control Qusayr, they can guarantee secure lines of communication between Damascus, the Syrian coast and Lebanon. If the oppositionists control it, they would cut off these roads and threaten the capital by cutting it off from the coast, which is pro-regime. They would also separate Damascus and the coast from the Shiite areas in Lebanon, which are pro-regime.

After the fall of the Tall Mando, Al-Monitor received field information that regime loyalists have largely encircled Qusayr in the northwest and that the battles are now raging to control three small towns southeast and northeast of the city.

The loyalists assert that these small towns will fall in the coming days and when that happens the loyalists will deem the Qusayr military fallen. The opposition retorts that the attacking forces on that axis have suffered several setbacks and will be unable to achieve their goals. More important, the opposition is threatening to move the battle to Lebanon by randomly shelling the Shiite Hermel area because, they say, Hezbollah is the party conducting the Qusayr battle. The loyalists, on the other hand, see the bombing on Lebanon as a sign that opposition gunmen are at their last gasp and are trying to lure foreign powers to defend them by talking about Hezbollah and by bombing Lebanese territory.

Which of the two sides is telling the truth and which is trying to justify its retreat? The answer may come in a few days.