Syria's Foreign Ministry has warned Lebanon not to allow armed groups to cross from Lebanon into Syria to conduct operations against regime forces, with Syria threatening military action if it continues, writes Jean Aziz. 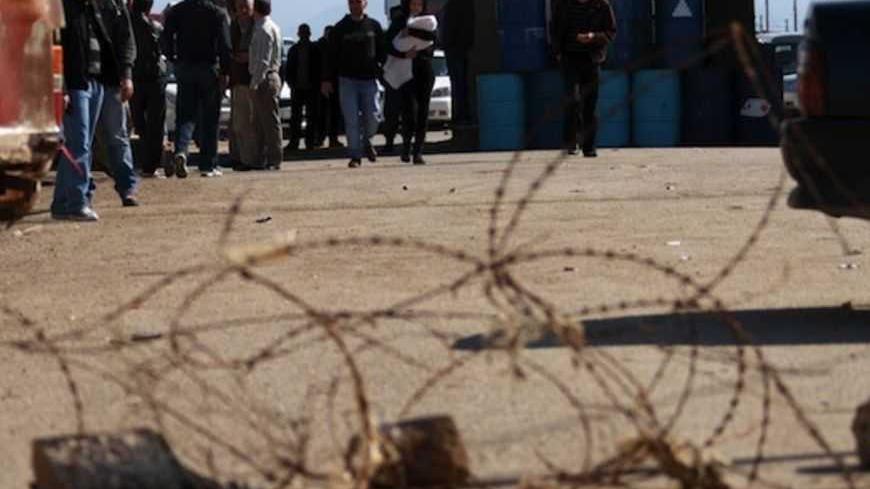 People cross the Lebanese-Syrian border by foot after residents blocked the road in protest against what they said were the sending of diesel to the Syrian goverment, in northern Lebanon, Feb. 13, 2013. - REUTERS/Omar Ibrahim

While the Syrian Foreign Ministry sent an official letter to Beirut threatening to bomb Lebanese areas, the Land of Cedars will be without any senior officials in the coming week, as heads of its constitutional authorities travel outside the country. Meanwhile, sources have told Al-Monitor that the situation in the northern border area of Akkar has already begun to deteriorate significantly.

On March 14, the Lebanese Foreign Ministry received an official letter from its Syrian counterpart, the first of its kind since the Syrian civil war began. It appeared to be more than a message of blame and accusation, while less than a formal warning or Syrian threat against Lebanon.

The letter stated that "during the last 36 hours, large numbers of armed terrorist elements infiltrated from Lebanon into Syria.” It continued, "Syrian forces clashed with them within Syrian territory, and the clashes are ongoing.” The letter noted that "the Armed Arab Forces (the Syrian army) are still exercising self-restraint by not [targeting] the armed gangs inside Lebanese territories to prevent them from crossing into Syria, but this will not continue indefinitely."

The letter added that "Syria expects Lebanon not to allow those [elements] to use the border as a passageway because they are targeting the security of the Syrian people, violating Syrian sovereignty, and exploiting the good brotherly relations between the two countries." However, the message clearly mentioned that the Syrian army may be forced to resort to "bombing the gathering places of the armed gangs in Lebanon in the event of continued cross-border infiltrations."

Beirut tried to give the impression that it is dealing with the issue seriously, but that doesn’t appear to be sufficient. President Michel Suleiman has been on a 9-day African tour since early last week, accompanied by a large delegation of 93 people. Through a statement from the Ivory Coast, he tried to reassure Damascus that he is taking the new Syrian "message” seriously. Meanwhile, Lebanese Prime Minister Najib Mikati and Parliament Speaker Nabih Berri are preparing to travel on March 17 to Rome to participate in the inauguration of the new pope. As a result, Beirut won't have any of its constitutional powers present, just as its northern border adjacent to the Syrian civil war appears to lack any official security or military presence.

In contrast to the official, stated Lebanese position, the situation on the ground seems to be more tense and worrying. In the northeastern part of Lebanon, clashes have become a daily event on both sides of the border with Syria, particularly in the well-known Sunni-Shiite-Alawite triangle.

But other developments — which apparently necessitated the writing of the official Syrian letter — took place in the past two days in the area extending from that triangle westwards, in the Lebanese area of Akkar, which is offset from the Syrian side by the Homs countryside to the east and Tartous Province to the west. On the Lebanese side, this northern border strip extends along roughly 45 miles, and has a Sunni, Alawi and Christian cross-sectarian population.

These days, wherever there are Sunni or Alawite villages or towns along the Lebanese border, insurgents are present. Opponents of the Syrian regime are in Sunni towns like al-Abboudiya, Hikr Janine, al-Qashlaq, Wadi al-Hawr, Noura, western Dabbabiya, and Fureidis, up east to the Bekaa Valley and Wadi Khaled up to Hnaider and Qarha; meanwhile, supporters of the regime have taken to the upper villages, namely the village of Hikr al-Dahiri, which became the headquarters of Lebanese Alawite politician, former member of parliament Ali Eid, whose son Refaat Eid is leading the battle against Sunni jihadists in the northern capital city of Tripoli.

Amid this tension, residents of the border area told Al-Monitor that since Syria addressed its official letter to Beirut, unusual military movements have been witnessed on the Syrian side. According to eyewitnesses, Syrian military experts dismantled minefields planted by the Syrian army along the border over a year ago to prevent smuggling or armed infiltrations. Other residents confirmed that Syrian military bulldozers were seen on the same line paving border tracks and opening roads. Both procedures suggest the possibility of the Syrian military launching limited military operations or incursions to hunt down its opponents inside Lebanese territories.

But diplomatic circles in Beirut rule out the possibility of such an escalation taking place, and instead expect clashes between armed Syrian parties within Lebanon itself, exactly as the situation is in Syria between Jabhat al-Nusra and the Free Syrian Army.

These circles have revealed confidential information that a senior official in the Islamic Group — the local label for the Muslim Brotherhood in Lebanon — visited Damascus days ago, and held a series of meetings with senior Syrian officials there. According to the same diplomatic sources, this indicates that the cards of the Syrian armed jihadist forces in northern Lebanon could witness an unexpected reshuffling.

In both cases, the possible scenarios on the Lebanese-Syrian border seem bleak. Lebanese officials openly talk about the presence of approximately one million displaced Syrians in Lebanon, which make up about a quarter of its population. They represent a human tragedy, and a social, economic and security burden whose implications are unpredictable.