Friday’s deadly clash in Arsal, Lebanon, signals a dangerous escalation in confrontations between the Lebanese Army and Sunni Jihadist groups connected to those fighting in Syria,  writes Jean Aziz from Beirut. 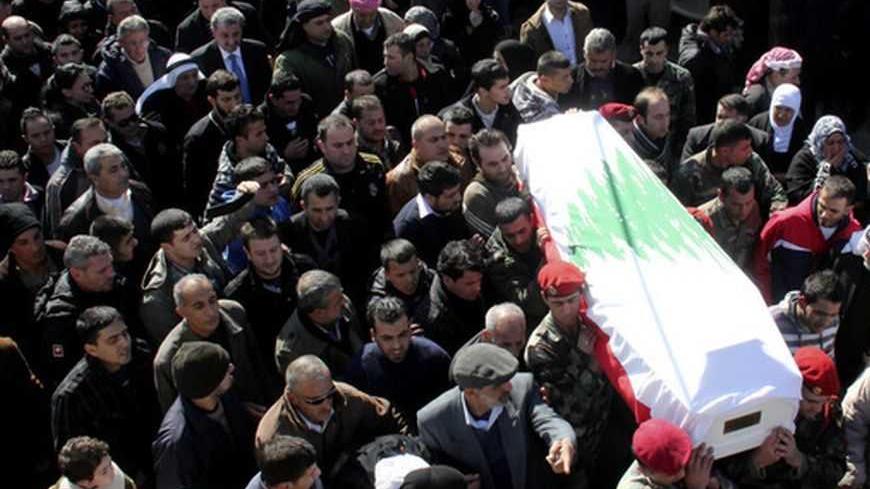 Lebanese soldiers carry the coffin of Sergeant Ibranim Zahraman during his funeral in the town of Akkar northern Lebanon, Feb. 2, 2013. Soldiers and gunmen were killed in clashes in the country's Bekaa Valley on Friday after militants attacked a Lebanese army unit, security sources said. - REUTERS

On Friday, Feb. 1, the Lebanese army lost two soldiers, a sergeant and a captain, who were part of a strike force unit that belonged to Lebanese Army Intelligence. The two soldiers died during a clash between the army unit and armed Sunni fundamentalists in ​​Arsal, which is near the Syrian border in the Bekaa Valley. That incident has many political and security dimensions and it confirms, as Al-Monitor has been reporting, that Jabhat al-Nusra is now in Lebanon and that the group’s activities are about to become public.

Lebanese military sources said that two days before the incident, the Intelligence Directorate of the Lebanese Army received information that Khalid Ahmed Hameed, who is wanted by the Lebanese judiciary, came to the town of Arsal from Syria, where a civil war has been raging for about two years. The sources said that Hameed is suspected of kidnapping seven Estonian citizens in the Bekaa on March 23, 2011, as they were riding from Syria to Lebanon on bicycles. There were held at an unknown destination for 111 days, before being released under mysterious circumstances as a result of secret negotiations between French security agencies and the intelligence arm of the Lebanese Internal Security Forces, which is close to former Prime Minister Saad Hariri.

The Lebanese official sources said that Hameed is suspected of being one of the field assistants of Hussein al-Hujairi, who is believed to be the kidnapping’s mastermind. The Lebanese government also received Western security reports raising the possibility that Hameed is linked to jihadists belonging to al-Qaeda in Iraq and Jabhat al-Nusra in Syria. Hameed is also suspected of being involved in the shooting incident against the Lebanese army in Arsal on Nov. 22, 2011, to prevent an army patrol from arresting a Syrian jihadist named Hamza al-Qarqour.

Based on the above information, an elite strike force unit belonging to army intelligence went to Arsal to ambush the suspect and arrest him. The operation started around noon on Friday but the arrest operation was interrupted by an exchange of gunfire between the soldiers and the suspect, thus revealing the ambush to the jihadist groups residing in Arsal.

Several press reports said that the town’s mosques issued calls for all gunmen to pursue the army unit and block its escape. In a short period of time, the Lebanese army unit found itself surrounded by hundreds of fundamentalists and jihadists. The long gunfight resulted in the killing of the army sergeant and captain and the wounding of eight soldiers. Although the jihadists knew that they were fighting Lebanese army soldiers, they captured the bodies of the two dead soldiers, as well as the wounded and the remaining soldiers and took them to Arsal’s main square in what looked like a jihadist ceremony that involved celebratory gunfire and other practices, according to Lebanese press reports.

Similar jihadist celebrations over the bodies of dead Lebanese army soldiers happened on at least two previous occasions. The first time was on the night of Dec. 31, 1999, in the mountainous region of Dinniyah in northern Lebanon, near the city of Tripoli. Back then, a jihadist group attacked a Lebanese army post in an attempt to start a Sunni fundamentalist insurgency in the region. The second time was on May 21, 2007, when a group of jihadists belonging to the Sunni organization Fatah al-Islam attacked a Lebanese army checkpoint at the entrance of the Nahr al-Bared Palestinian refugee camp near Tripoli. Seven army soldiers were literally slaughtered in that incident.

Because of several factors, what happened on Friday in Arsal marked a dangerous turn in the confrontations between the Lebanese army and Sunni jihadist forces. First, the jihadist forces today have strategic depth that provides them with support, supplies and sanctuary. That strategic depth is represented by the Sunni jihadist groups that are fighting in the Syrian civil war against Bashar al-Assad. Second, the area where the incident took place is geographically linked to several dangerous areas. It is connected to the Damascus and Homs countryside, which is where an Al-Monitor research report predicted will be the main area of a Lebanese-Syrian war. It is also connected to the tense demarcation line between pro-Hezbollah Shiites in Baalbeck and Hermel and certain Palestinian armed locations. Those factors were not present during the incidents in Dinniyah and Tripoli, because they are not linked to the Syrian depth nor to Lebanese Shiite areas.

Another important factor is that the incident coincided with a series of Lebanese crises that were caused by a Sunni fundamentalist “awakening” in Lebanon, as a result of the Syrian events and Middle Eastern developments over the past two years.

Last week, just before the Arsal incident, the personnel of a Lebanese TV station were threatened with death if they didn’t cancel the planned showing of a comedy skit making fun of Salafist Sheikh Ahmad al-Assir, who is from Sidon, southern Lebanon. The TV station and those responsible for the skit backed down and complied. Near Assir’s headquarters in Sidon, jihadist Palestinian groups are solidifying their presence in Ain al-Hilweh camp, which is adjacent to Sidon and is Lebanon’s largest Palestinian refugee camp. Meanwhile, the northern city of Tripoli is still reeling from the recent attempted assassination of Youth and Sports Minister Faisal Karami by Sunni jihadist elements.

According to Lebanese cabinet ministers, those who tried to assassinate Karami have threatened Lebanese security forces about trying to arrest any of their members. Thus, the Lebanese authorities have been unable to arrest suspects involved in an incident that happened in broad daylight and in front of the cameras. In addition, the top mufti of the Sunnis in Lebanon recently issued in Beirut a fatwa, or religious edict, deeming any Muslim who supports the passage of a civil marriage law to be an apostate and outside of Islam.

So it seems that the four dimensions — the South, the Bekaa, the North and Beirut — forming a perfect storm for Sunni jihadism in Lebanon are now set. What will be the result of that development? We are passing through a very dangerous phase, which should be closely monitored by Lebanon, the region and the West.