The outcome of the clashes in Arsal between the Lebanese army and fundamentalists supporting the Syrian opposition may hold the key to how Lebanon can resolve its political crises. 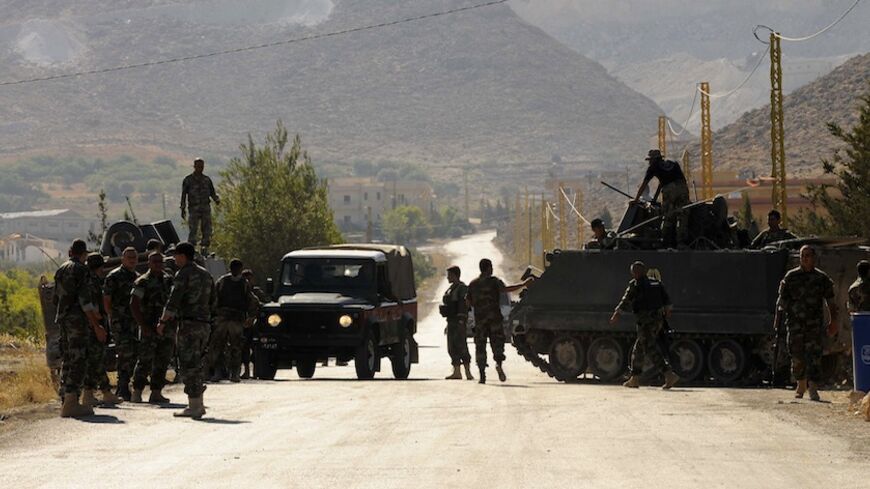 Over the last two days, the Lebanese army has been facing its most serious challenge as a military institution since May 2007. The Lebanese government is now facing the difficult test that it has been anticipating since the outbreak of the Syria crisis in March 2011.

Violent clashes broke out in Arsal between Lebanese army units and armed supporters of the Syrian opposition in the early afternoon of Aug. 2. Arsal, a town in the eastern Bekaa Valley, lies along the Syrian border.

The clashes were triggered when the army arrested a Syrian gunman named Imad Ahmed Jumaa on suspicion of being an official of the pro-al-Qaeda group Jabhat al-Nusra. Immediately after the arrest, gunmen clashed with army soldiers in the area, breaking into the center of the Internal Security Forces (ISF) in Arsal. Within a few hours, the fighting spread to include Jurud Arsal, the rugged outskirts of Arsal, and the surrounding areas. Dozens were killed and injured, including, as of writing this, 10 dead and 25 wounded soldiers, and 13 soldiers who are missing. Also, an unspecified number of ISF troops were kidnapped and taken to areas controlled by Sunni fundamentalist gunmen on the Syrian side of the border.

Although the incident happened near the border, the rest of Lebanon remains worried about what might happen next, for this is not an isolated incident. It is linked to a number of other serious events, including a number of hot spots in Lebanon where the Sunni fundamentalist gunmen have spread.

Over the last five months, the region east of Arsal has become a breeding ground for a large number of gunmen of different nationalities who are loyal to groups fighting against the Syrian authorities. It appears that gunmen who managed to escape after the Syrian opposition defeats in Qusair, Qalamoun, Nabak and Yabrud between June 2013 and March 2014 have gathered there. Press reports based on official sources have estimated the number of gunmen at 3,000. This situation has created a state of imminent danger, which has resulted in repeated clashes and attacks on homes in Arsal, the killing of Lebanese and Syrian citizens and frequent kidnappings.

All this made Hezbollah clash with the gunmen in Qalamoun more than two weeks ago. These clashes marked the beginning of a comprehensive military plan carried out by Hezbollah fighters. In this context, Hezbollah sources have confirmed to Al-Monitor that the plan consists of three stages, and is in its third stage: from Arsal’s northern perimeter to the Lebanese town of Tfail — this stage has been fully implemented; from Tfail to Jurud Qalamoun in Syria — this stage was close to completion a few days ago; and combing the area surrounding Arsal — this stage is set to start in a few days. The first two stages have effectively resulted in Jurud Arsal being encircled.

The sources told Al-Monitor that the gunmen sensed that they were being surrounded and hence decided to escalate the situation before the siege completely encircled their hideouts. Thus, it is likely that they took advantage of the Lebanese army taking the logical and legal step of arresting a terrorist suspect to attack Arsal and the army. The immediate goal of the operation was to break the siege on the fundamentalists. But the most dangerous goal was to split the Lebanese army by rousing feelings of sectarian solidarity and by playing on the chord of Sunni-Shiite strife within the army. They tried to pave the way for this a few days ago by disseminating news about alleged sectarian desertions within the army. But it seems that those attempts failed and the army showed it was solid in the face of the fundamentalists. Hence, the current events are the army's most serious challenge since it confronted armed Sunni fundamentalists in the Nahr al-Bared refugee camp in northern Lebanon between May 21 and Sept. 3, 2007.

The Lebanese government's challenge is linked to the implications of the clashes in Arsal. On the one hand, it is well known that more than a million displaced Syrians reside in Lebanon, some of whom are armed. It is also known that fundamentalist hotbeds are interacting, in a structured manner, with the events in Arsal. The three most notable hotbeds are: Tripoli and Akkar in northern Lebanon; Ain al-Hilweh Palestinian refugee camp near Sidon in the south; and Roumieh prison, which lies about 8 kilometers (5 miles) northeast of Beirut, which is where hundreds of Sunni fundamentalists spend their detention and jail time.

Indeed, when the news of the events in Arsal reached Tripoli, sporadic clashes erupted there between Sunni fundamentalist gunmen and army units. Near Ain ​​al-Hilweh, the army tightened its security measures in case of an emergency, and government sources told Al-Monitor that Roumieh prison is on full alert and that the military protection in the prison's vicinity has been strengthened.

The Lebanese are very worried with the news of the clashes in Arsal. They are aware that a substantial part of their future depends on what happens there. If the army can break the back of the fundamentalists' defeat near Arsal then Lebanon will avoid a major disaster. In fact, this could open the door for resolving many of the outstanding political crises at home — maybe even pave the way for electing a new president. But if the opposite happens? That is a situation the Lebanese would rather not think about.