Is Lebanon next target of Islamic State? 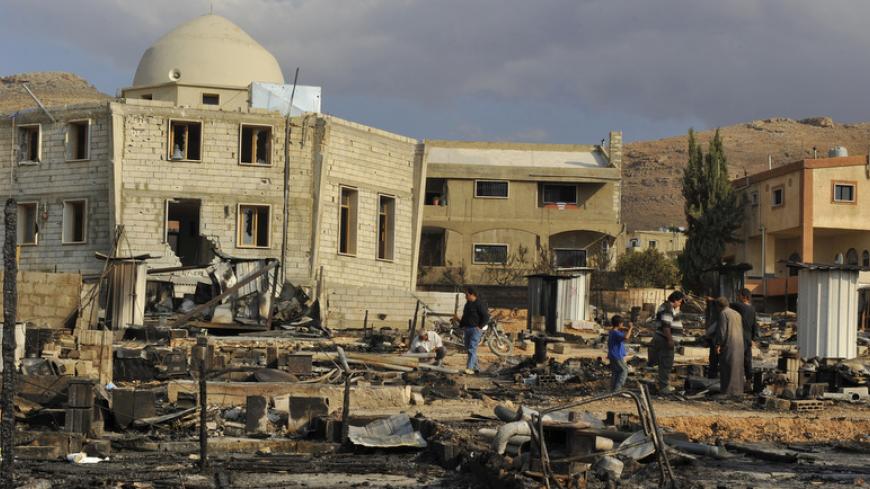 A general view shows damage and burnt tents for Syrian refugees from the fighting between Lebanese army soldiers and Islamist militants in the Sunni Muslim border town of Arsal, in the eastern Bekaa Valley, Aug. 7, 2014.

On Aug. 2, armed extremist forces attacked Arsal, located in the Bekaa Valley. The assault followed the arrest of Imad Ahmed Jumaa, who had been a leader in Jabhat al-Nusra, but who may have recently sworn allegiance to IS, according to Esperance Ghanem.

The fighting in Arsal claimed the lives of 42 civilians and 17 Lebanese soldiers. Twelve policemen and 19 soldiers are missing and presumed taken captive by the extremists.

The Lebanese army and Hezbollah complemented each other’s operations against the jihadists. Jean Aziz reports that the attack on Arsal was a reaction to Hezbollah’s recent gains against the Syrian armed groups, who have been taking their battles to Lebanon.

Ghanem writes: “Since the barren land east of Arsal is in Syrian territory and thus can be handled by the Syrian army, and since Hezbollah is deployed in the southwest to protect Shiite villages, the Lebanese army is focusing its military operations on separating the town of Arsal from its surroundings and cutting off the supply lines between the two sides, to stop Arsal from becoming a reservoir of gunmen.”

Overshadowed in the media by events in Gaza and Iraq, the threat to Lebanon was the subject of a special session of the UN Security Council last week.

Mediation by Sunni Muslim clerics helped facilitate a retreat, at least for now, of the armed groups from the Lebanese border town.

Aziz writes: “The Lebanese government's challenge is linked to the implications of the clashes in Arsal. On the one hand, it is well known that more than a million displaced Syrians reside in Lebanon, some of whom are armed. It is also known that fundamentalist hotbeds are interacting, in a structured manner, with the events in Arsal. The three most notable hotbeds are: Tripoli and Akkar in northern Lebanon; Ain al-Hilweh Palestinian refugee camp near Sidon in the south; and Roumieh prison, which lies about 8 kilometers (5 miles) northeast of Beirut, which is where hundreds of Sunni fundamentalists spend their detention and jail time.”

Al-Monitor has consistently covered the threat to Lebanon, and to Arsal, from jihadist groups fighting in Syria. Aziz reported back in February 2013 on a terrorist attack in Arsal that killed two soldiers, observing, “Jabhat al-Nusra is now in Lebanon and … the group’s activities are about to become public.”

Mohannad Sabry argues that the Egyptian government’s diplomacy in the Gaza war falls short of previous mediation efforts and is “another phase of Egypt's growing political isolation since the war kicked off in Gaza.”

Sabry writes: “Egypt's manipulation of the Hamas-ruled Gaza Strip was politically cunning since Hamas' bloody takeover in 2007, and despite a few disruptive incidents, the situation has always been under control until 2013 when Egypt's military masterminds decided that neither Hamas nor its mother organization, the Muslim Brotherhood, are viable players. This war has clearly shown Hamas, Egypt and the world that Hamas is not the only player, neither are they the most popular in Gaza any longer — they are one voice among several powerful, popular and active others.”

Egypt seems to be coordinating its military operations with Israel against terrorist groups in the Sinai Peninsula. An Al-Monitor correspondent reports on eyewitness accounts that suggest Israel was responsible for an armed drone attack against militants on July 23, although the Egyptian military took credit for the operation.

Bruce Riedel argues that Saudi Arabia’s priority in the Gaza war is to support its ally, Egyptian President Abdel Fattah al-Sisi, in his efforts to humiliate Hamas.

The kingdom’s Egypt-first strategy is complicated by King Abdullah’s deep personal commitment to the Palestinian cause and the admiration of many young Saudis for Hamas.

Riedel writes: “Abdullah and the other royal princes in Saudi Arabia are well aware that many Saudis, especially young people, admire Hamas for fighting against Israel. The royals are not eager to appear soft on Israel especially when gruesome images of dead children are appearing every night on Arab television.”

Ali Hashem reports this week on the shift in Iran to more vocally back Hamas in its battle with Israel.

An Iranian official explained to Al-Monitor, “Everyone, or at least those whom it may concern, is aware of our contribution to the Palestinians, but we thought that making ourselves scarce will help the Palestinians gain more with respect to any possible deal. When we realized that nothing is going to change, we decided to jump back at the forefront.”

The Iranian official added, “Even some countries that back the militants in Syria and Iraq, they are today standing by Israel — literally. They are encouraging Israel to destroy Gaza; moreover, they are exerting additional pressure on Egypt to keep the borders closed. We wanted people to see the picture as it is.”

A Hamas official told Al-Monitor, “There are no doubt many differences on other issues, but we expected a warmer approach from Iran; all these years they’ve been supporting the resistance, we expected a louder voice at the start [of the crisis in Gaza].”

The official added, “[In terms of] training and expertise, the Iranian leadership has been very supportive. This is not something to argue about, but they weren’t there as before. We hope this new wave of support that they started 10 days ago will continue because we need every word; though we understand they might have been busy with the nuclear talks that are a priority to President [Hassan] Rouhani’s administration.”

Palestine Pulse’s Asmaa al-Ghoul wrote of the bombing that killed nine members of her family:

"Tears flowed until my body ran dry of them when I received a telephone call on Aug. 3, informing me that my family had been targeted by two F-16 missiles in the city of Rafah. Such was the fate of our family in a war that still continues, with every family in the Gaza Strip receiving its share of sorrow and pain.

"My father’s brother, Ismail al-Ghoul, 60, was not a member of Hamas. His wife, Khadra, 62, was not a militant of Hamas. Their sons, Wael, 35, and Mohammed, 32, were not combatants for Hamas. Their daughters, Hanadi, 28, and Asmaa, 22, were not operatives for Hamas, nor were my cousin Wael’s children, Ismail, 11, Malak, 5, and baby Mustafa, only 24 days old, members of Islamic Jihad, the Popular Front for the Liberation of Palestine or Fatah. Yet, they all died in the Israeli shelling that targeted their home at 6:20 a.m. on Sunday morning."

Ghoul writes that the indiscriminate shelling will have far-reaching consequences:

"If it is Hamas that you hate, let me tell you that the people you are killing have nothing to do with Hamas. They are women, children, men and senior citizens whose only concern was for the war to end, so they can return to their lives and daily routines. But let me assure you that you have now created thousands — no, millions — of Hamas loyalists, for we all become Hamas if Hamas, to you, is women, children and innocent families. If Hamas, in your eyes, is ordinary civilians and families, then I am Hamas, they are Hamas and we are all Hamas."

On Aug. 10, Al-Monitor’s series on Middle Eastern countries’ lobbying efforts will continue with the release of profiles for Israel, Palestine, Jordan and Lebanon.