Never ask me about peace again

A first-hand account of the aftermath of an Israeli strike that killed nine members of the author's family. 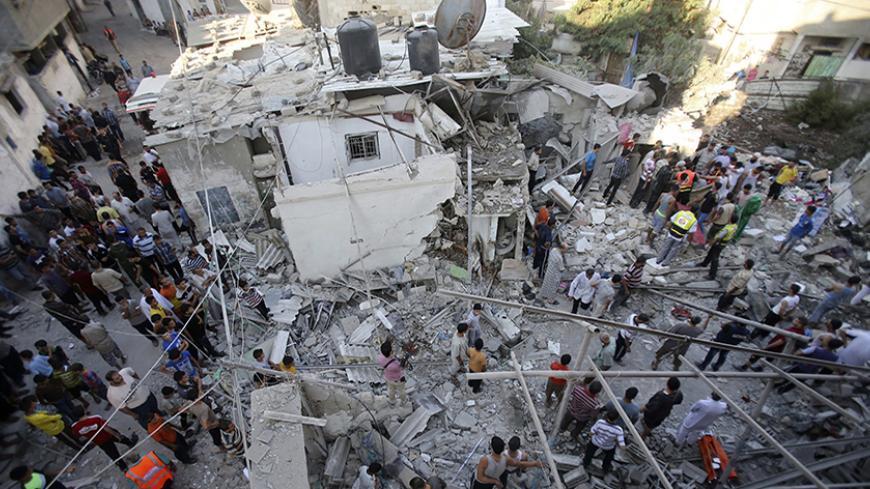 Rescue workers search for victims as Palestinians gather around the wreckage of a house destroyed in an Israeli airstrike that killed at least nine members from the al-Ghoul family, in Rafah, southern Gaza Strip, Aug. 3, 2014. - REUTERS/Ibraheem Abu Mustafa

Tears flowed until my body ran dry of them when I received a telephone call on Aug. 3, informing me that my family had been targeted by two F-16 missiles in the city of Rafah. Such was the fate of our family in a war that still continues, with every family in the Gaza Strip receiving its share of sorrow and pain.

My father’s brother, Ismail al-Ghoul, 60, was not a member of Hamas. His wife, Khadra, 62, was not a militant of Hamas. Their sons, Wael, 35, and Mohammed, 32, were not combatants for Hamas. Their daughters, Hanadi, 28, and Asmaa, 22, were not operatives for Hamas, nor were my cousin Wael’s children, Ismail, 11, Malak, 5, and baby Mustafa, only 24 days old, members of Islamic Jihad, the Popular Front for the Liberation of Palestine or Fatah. Yet, they all died in the Israeli shelling that targeted their home at 6:20 a.m. on Sunday morning.

Their house was located in the Yibna neighborhood of the Rafah refugee camp. It was one story with a roof made of thin asbestos that did not require two F-16 missiles to destroy. Would someone please inform Israel that refugee camp houses can be destroyed, and their occupants killed, with only a small bomb, and that it needn’t spend billions to blow them into oblivion?

If it is Hamas that you hate, let me tell you that the people you are killing have nothing to do with Hamas. They are women, children, men and senior citizens whose only concern was for the war to end, so they can return to their lives and daily routines. But let me assure you that you have now created thousands — no, millions — of Hamas loyalists, for we all become Hamas if Hamas, to you, is women, children and innocent families. If Hamas, in your eyes, is ordinary civilians and families, then I am Hamas, they are Hamas and we are all Hamas.

Throughout the war, we thought that the worst had passed, that this was the pivotal moment when matters would improve, that they would stop there. Yet, that real moment of pain, of extreme fear, was always followed by something even worse.

Now I understood why the photographs of corpses were so important, not only for international public opinion, but for us, the families, in search for an opportunity to bid farewell to our loved ones, so treacherously killed. What were they doing in those last moments? What did they look like after their death?

I discovered the photos of my dead relatives on social networking sites. The bodies of my cousin’s children were stored in an ice cream freezer. Rafah’s Abu Yousef al-Najjar Hospital was closed after being shelled by Israeli tanks, and the Kuwaiti Hospital that we visited just a day earlier had become an alternate venue, where this freezer was the only option available.

Al-Najjar’s director, Abdullah Shehadeh, told Al-Monitor, “We decided to move the patients when shells hit the main gate. Some patients, out of fear, ran out, despite the gravity of the security situation. We are now working out of this ill-equipped hospital.”

The Emirati Red Crescent Maternity Hospital, west of Rafah, has been transformed into a large container for corpses, with fruit and vegetable freezers filled with dozens of bodies.

I saw corpses on the floor, some with nametags on their chests, while others remained unknown. We held our noses, for the stench was unbearable, as flies filled the air.

Ibrahim Hamad, 27, removed his five-year-old son’s shroud-wrapped body from a vegetable freezer. Fighting back tears, he told Al-Monitor, “He died as a result of a reconnaissance drone missile attack. His body has been here since yesterday. The dangerous situation prevented me from coming to take him any sooner.”

I thank God that my relatives were quickly buried, and that my cousins Mustafa, Malak and Ismail did not remain long in a freezer, lest their bodies freeze, and their souls now rest in peace, leaving us with nothing but the silence of death and bodies forever trapped in the postures of their passing.

On the fifth day of the war, when I went to write my Rafah report about the shelling of the Ghannam family, I stopped by to visit my cousin’s house. I saw my relatives and we took photographs together. During the war, my cousin Wael’s wife had given birth to twins, Mustafa and Ibrahim, who were like two tiny angels, harbingers of hope and joy.

How could I have known that this would be our last meeting? I wish I had stayed longer and talked to them some more. Hanadi, Asmaa, my uncle and his wife laughed as they joked about the twist of fate that brought us together in the middle of a war, at a time when Israeli occupation forces had not yet begun perpetrating their wanton war crimes against Rafah.

Endings are so strange, as are living moments that suddenly become relegated to the past. We will never see them again, and the pictures that I took of the twins are now so precious, as one of them, Mustafa, was killed, while the other, Ibrahim, remained alive.

I wonder how they could differentiate between them, for they looked so much alike. Who identified them when their father died and their mother lay wounded in intensive care? Who was Mustafa, and who was Ibrahim? It was as if they had merged upon one twin's death.

In the photos taken after their death, my family looked so peaceful, asleep with their eyes closed. None of them were disfigured or burned, unlike hundreds of dead children and civilians that US-made weapons killed before them. We wondered if they died in pain. What happened when the missile, carrying tons of explosives, impacted their modest house and exploded, creating air pressure so fierce that their internal organs burst? Their suffering was perhaps lessened by the fact that they were sleeping.

I didn't see them when I went to Rafah on Aug. 2. I wrote about the death of the Ayad Abu Taha family, which was targeted by warplanes, and saw the corpse of Rizk Abu Taha, one year old, when it arrived at the Kuwaiti Hospital.

I observed him at length. He looked alive. One could see that he had been playing when he died, dressed in his pink pants. How could he be at such peace? The bodies of war victims look so different from how they appear on television. They are so real, so substantial, suddenly there before you, without any newscast introductions, music or slogans.

Bodies lay everywhere, and it was if everything in life had been to prepare us for this moment. Suddenly, the dead left their personal lives behind: their cell phones, homes, clothes, perfumes and daily chores. Most importantly, they left the fear of war behind.

Distances in the small Gaza Strip have grown larger, distances and time expanding as a result of the fear and death that shrank the life expectancy of the populace. We were unable to join the family for the funerals. My uncle, Ahmad al-Ghoul, later told me over the phone, “Because of the inherent danger, our goodbyes to them lasted mere seconds. Malak’s eyes laid open, as if to ask, 'What wrong did I commit?'”

I was born in 1982, in that same house in Rafah’s refugee camp, where the family’s large household expanded. I grew up there, and everything else grew with us: the first intifada, the resistance, my nearby school that I walked to every day. There, I saw my first-ever book library. There, I remember seeing my grandfather fall asleep as he listened to the BBC. And there, I laid eyes on the first Israeli soldier in my life, striking my grandfather to force him to erase the national slogans that adorned the walls of our refugee camp home.

Now, the house and its future memories have been laid to waste, its children taken to early graves. Homes and recollections bombed into oblivion, their inhabitants homeless and lost, just as their camp always had been. Never ask me about peace again.