The concept of "Fatahland" has been revived as a response to the Syrian conflict in Lebanese villages on the border areas with Syria, writes Nasser Chararah. 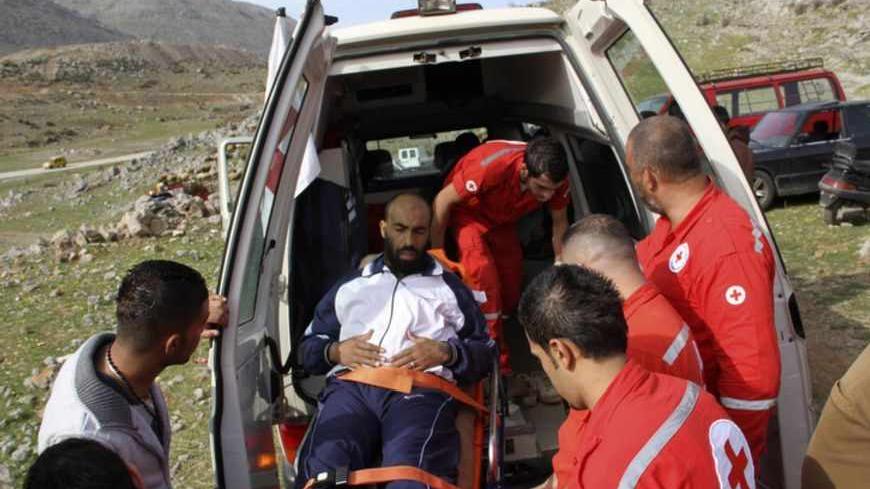 Lebanese Red Cross personnel move a Syrian refugee, who fled the fighting in his country, into an ambulance in the Shebaa region, March 21, 2013. - REUTERS/Karamallah Daher

In a span of 48 hours, close to 70 Syrian refugees arrived at the Lebanese Shebaa Farms area from the town of Beit Jann, in the Syrian-controlled section of the Golan Heights. They crossed the border with Lebanon on foot in a journey that took around eight hours, bypassing the zone patrolled by the United Nations Disengagement Observer Force (UNDOF), which has overseen the disengagement of the Syrian and Israeli armies since the 1973 war. It is the third batch of Syrian refugees to arrive from the Beit Jann area. The first arrived about three months ago and the second in March.

A source in the Lebanese army told Al-Monitor that more than 2,500 displaced Syrians have fled to the area, mostly from the village of Beit Jann and the surrounding farms. Their displacement is the result of clashes between the armed Syrian opposition and the Syrian army that have reached the section of the Golan unoccupied by Israel.

Tensions peaked last month, when groups affiliated with Jabhat al-Nusra abruptly entered Beit Jann and declared it a liberated village. As a result, the Syrian army warned the town’s residents to expel the insurgents, or it would be bombed. Some residents fled their homes and headed toward the section of Shebaa Farms facing their village in Syrian territory. Others fled to Shebaa after the Syrian army followed up on its warning and bombed the town. The second batch of refugees arrived transporting injured villagers, who had been carried on foot into Lebanon. One of them died after being transferred to a hospital in the Lebanese Bekaa.

The people of Shebaa Farms rejected a suggestion by a municipality member affiliated with the Lebanese Islamic Group to bury the Syrian refugee in the town cemetery for fear that his grave would become a shrine for Syrian opposition militants at nearby posts on Syrian territory. That would transfer the fighting between the Free Syrian Army (FSA) and the regular Syrian army to their town, as is happening in Lebanese villages in the north opposite the Syrian towns of Talkalakh and al-Qusayr, in the countryside around Homs.

Local sources in Shebaa told Al-Monitor that the Lebanese Directorate of General Security is monitoring the movement of Syrian refugees at the checkpoint between Shebaa and the Syrian Golan Heights. It is also documenting their numbers and conditions, as well as screening refugees for possession of weapons upon entering Lebanese territory.

The continued displacement of Syrians to the Shebaa Farms area is for many reasons raising ​​concern at political and security levels in Lebanon, though primarily because of the high-stakes sensitivity of this section of southern Lebanon. The area, al-Urqub, has proven to be a volatile demographic and geographic triangle when regional developments are played out there.

After 1967, the area was dubbed "Fatahland." Under the Baathist strongman Salah Jadid, Damascus adopted a strategy of transforming the Shebaa Farms area at the intersection of the Lebanese-Syrian border and the Golan Heights, which had just been captured by Israel, into a rear base from which Palestinian fighters could launch attacks against the Jewish state.

Today, there is concern by security officials in Lebanon over the reversion of the Shebaa Farms area to Fatahland, but this time with the aimed of overthrowing the Syrian regime. What reinforces the possibility of this scenario is ongoing news about Islamist militant groups affiliated with the Syrian opposition smuggling weapons and jihadists to and from Syria through the rugged tracts extending from the town of Shebaa up to the slopes of Mount Hermon and inside Syrian territory.

In addition, the Shebaa Farms area is historically a stronghold of the Muslim Brotherhood. Although this fades into the background in the absence of political crises, it reemerges when the region rages with clashes. The state of political Islam in this area is more like a "stagnant climate" that quickly changes when exposed to crises, especially if the Brotherhood is a party to the conflict.

The recent pressure of events on Shebaa Farms, and the growing movement of Syrian refugees from Syrian areas close to it, reinforces the expectation that it will become a base or rear front for the battles taking place in the unoccupied Golan Heights. This is similar to what has happened in northern Lebanon, where areas facing the Homs countryside, Talkalakh and al-Qusayr, turned into a blazing rear front, and a military, logistical and confessional extension of the explosive conflict in Homs that has been ongoing for nearly two years.

Nasser Chararah is a contributing writer for Al-Monitor's Lebanon Pulse, head of the Lebanese Institute for Studies and Publications, a writer for multiple Arab newspapers and magazines and author of several books on the Hezbollah-Israeli conflict.