The Druze in Lebanon are preparing to defend themselves against a possible attack by the Islamic State, in light of their shaky trust in Hezbollah. 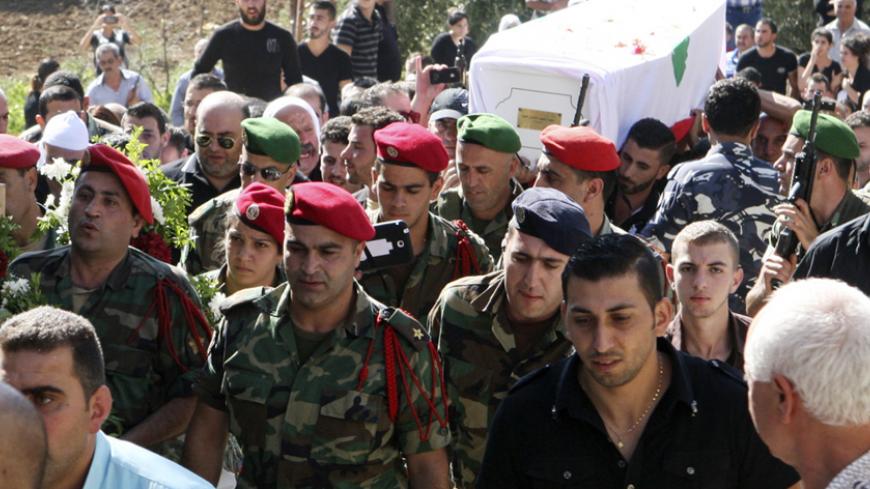 The Lebanese Druze leadership and community have sat on the sidelines of the inter-Muslim conflict arising in the region. But they are facing a growing dilemma with the rise of the Islamic State (IS) in Lebanon, stuck in a struggle between the threat posed by the organization and the Druze community's difficult history with Hezbollah.

As Lebanon’s north was rocked by battles between extremists affiliated with Jabhat al-Nusra and IS against the army, a small unit of Druze militants participated in live-fire exercises and combat training in one of the verdant valleys of the Metn Mountains, sources said.

Some 250,000 Druze, representing 5% of the Lebanese population and known as al-Mowahedoon (Unitarians), are currently spread over Mount Lebanon, the Chouf area, the Bekaa Valley and south Lebanon. The movement, initiated by Hamzah Bin Ali, is built on an esoteric interpretation of Islam and Sufism. The community is known for its fierce fighters who fought in the Lebanese civil war.

Abu Alaa, a Druze military trainer whose name has been changed for security reasons, told Al-Monitor, “With the security situation deteriorating day by day, the danger has become too great for us to sit idle. When the 1975 civil war started, we were ill-prepared to face the onslaught. We will not make the same mistake twice. We have to prepare for the worst.”

Druze watch with angst as violence engulfs Lebanon. In the last month, several terror networks were dismantled by the Lebanese army, the last of which led to the discovery of three booby-trapped cars. IS terrorist Ahmad Mikati admitted this week to helping his organization create a caliphate in north Lebanon by recruiting people and preparing suicide attacks targeting Shiite Hezbollah strongholds.

“The Druze leadership has declared that it will remain under the umbrella of the state as long as the army is able to defend the nation,” Chafic al-Masri, a political science and international law professor at the American University of Beirut, told Al-Monitor.

The main political Druze formation is the Progressive Socialist Party headed by member of parliament Walid Jumblatt. The Druze leader has repeatedly condemned self-defense squads and stated that weapons should remain exclusively in the hands of the Lebanese army.

However, not all Druze share Jumblatt’s opinion. “We have been training since 2008,” acknowledged Karim, a former Druze fighter who lost a relative in September in a live-fire exercise.

On May 7, 2008, tensions between the Druze and Hezbollah took a turn for the worse, when a scheduled labor protest morphed into a takeover of Beirut by Hezbollah. Over the course of seven days, brutal battles took place in several Druze mountain villages between Druze fighters and Hezbollah militants. Violence spread to the Druze strongholds of Barouk and Niha in the Chouf and were dovetailed by several kidnappings in the mountain region.

"Today we are torn between our fear of IS and our suspicion of Hezbollah," Karim said.

Increasing fear of infiltration by radicals has been especially acute in the Rashaya region, a Druze bastion neighboring the Shebaa Farms area, which sits on Lebanon’s southeastern border with Syria and the Israeli-occupied Golan Heights. Rumors of Syrian fighters crossing into the Shebaa Farms area has prompted security concerns among Druze, who fear that these fighters could attempt to gain access into Druze territory, similarly to recent security incidents in Arsal, a town on the northeastern border in the Bekaa Valley.

In August, violent clashes erupted between the Lebanese army and fighters belonging to IS and Jabhat al-Nusra, some of whom were entrenched in Arsal’s Syrian refugee camps, while others crossed from the Qalamoun region in Syria. The fighting lasted for five days and resulted in the death of 19 Lebanese soldiers and the kidnapping of 28 members of the Internal Security Forces and the Lebanese army.

Umm Hana, whose name has been changed for security reasons, is a Druze resident from South Lebanon. She admitted that Rashaya Druze residents were training to use light weapons, just like Metn residents. “My brother, who previously worked with the special forces in South America, came for a three-month vacation this summer and provided the town’s young people with military training,” she said.

In the first phase, trainees use hunting rifles due to insufficient ammunition. In the second phase, militants learn to manipulate other weapons, such as PK machine guns and Kalashnikovs, with special attention given to sniper training, according to Abu Alaa. Buying arms has become an urgent matter for the Druze, who feel the need to protect themselves, their families and villages. Druze sources in the Metn region say that most weapons are bought by private individuals. However, political sources told Al-Monitor that Hezbollah has, on several accounts, supplied Druze from south Lebanon with weapons through intermediaries. Even as Hezbollah and Druze interests converge in the face of IS, relations between the two remain tainted with suspicion.

“There are definite fears that we may be drawn into the war,” said Druze Sheikh Ramzi Makarem, “but we will remain on the sideline of any conflict, and defend our areas wherever the attack comes from.”

Abu Alaa shares the above opinion. He said that old fighters will keep on training the new generation as long as needed, whether men or women. The military trainer said he has taught his wife and nieces how to use light weapons and grenades.

“Our priority is to defend our land, our families and our home. It is a matter of honor for us and we have done it many times before. Women, just as men, need to be taught how to defend themselves if the need arises so that they can survive,” Abu Alaa said.