Gunmen from the Islamic State and Jabhat al-Nusra have exploited Eid al-Adha to attack Hezbollah in a new location in the center of Lebanon’s border with Syria. 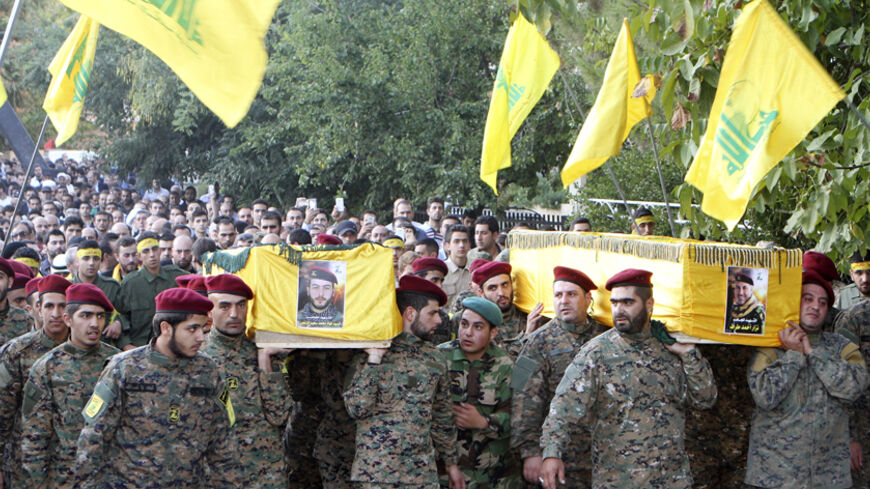 Lebanon's Hezbollah members carry the coffins of two of their comrades, who were killed in clashes with Jabhat al-Nusra fighters in eastern Lebanon, during their funeral in Baalbek, Oct. 6, 2014. - REUTERS/Ahmad Shalha

On the afternoon of Oct. 5, pitched battles took place between militants of the Islamic State (IS) and Jabhat al-Nusra and the Lebanese army and Hezbollah fighters in the center of Lebanon’s eastern border with Syria.

The battle began after Sunni fundamentalist gunmen tried to cross from Arsal’s barren lands, at the northeast corner of Lebanon, in a southerly direction toward the center. The new site of clashes is a densely populated Shiite area, adjacent to Brital and close to Baalbek, both considered Hezbollah strongholds.

Sources close to Hezbollah told Al-Monitor about four factors that forced this shift by IS and Jabhat al-Nusra.

The first: the surprising early arrival of winter, or at least the bitter cold, in these barren lands. Late September saw a significant temperature drop in the mountains where peaks reach more than 2,600 meters (8,500 feet) above sea level, forcing the gunmen to seek shelter.

The second: the Lebanese army has tightened its control on the roads linking Arsal to the area for the first time since the outbreak of battles between the army and the armed fundamentalists on Aug. 2.

For the past two years, Arsal has been a safe haven for the terrorists, especially in winter, and it became the gunmen’s logistical depot for arms, ammunition, equipment, food and medical care. Arsal supplied these things for more than 3,000 gunmen deployed in Arsal’s surroundings, which extend about 70 kilometers (43 miles) from the city. But after the army was able to block the road between Arsal and its remote areas, the gunmen’s lifeline was cut. The army then increased the pressure.

The third factor is that the armed fundamentalists thought that they had a golden opportunity to play on Lebanese internal conflicts, especially using Sunni-Shiite sectarian divisions to foment turmoil inside Lebanon and increase support for them.

The sit-ins and the roadblocks carried out by the families of the soldiers captured by IS and Jabhat al-Nusra on Aug. 2 have become a religious issue between Sunnis and Shiites in Lebanon. Also, new security developments have unfolded in Tripoli, where IS flags have started flying and calls have gone out to support the terrorists.

All this has likely made the fundamentalist gunmen believe that any new front they will open may blow up the Lebanese situation in a domino effect, and that they would be able to achieve contiguity between the areas where they are isolated in the east and the areas where some of their supporters are deployed in the central Bekaa Valley and north Lebanon.

The fourth factor is technical: the exploitation of Eid al-Adha to conduct the attack. The holiday has reduced the number of Hezbollah fighters stationed at the attacking points, increasing the element of surprise.

In light of these four factors, sources close to Hezbollah told Al-Monitor that the gunmen have decided to open a new front.

This new front is doomed to fail, they asserted, and it will be quickly resolved by Hezbollah and the Lebanese army with help from the Syrian army on the other side of the border.

But the question remains: What will be the result of this battle on the sectarian tensions in Lebanon, particularly in Tripoli and in some areas of the north, and in terms of the fate of the army’s hostages being held by the terrorists?