By arresting the former wife of Abu Bakr al-Baghdadi and the wife of a top Syrian jihadist, many fear that Lebanese authorities have lost crucial leverage in retrieving the country’s kidnapped soldiers from Jabhat al-Nusra and the Islamic State. 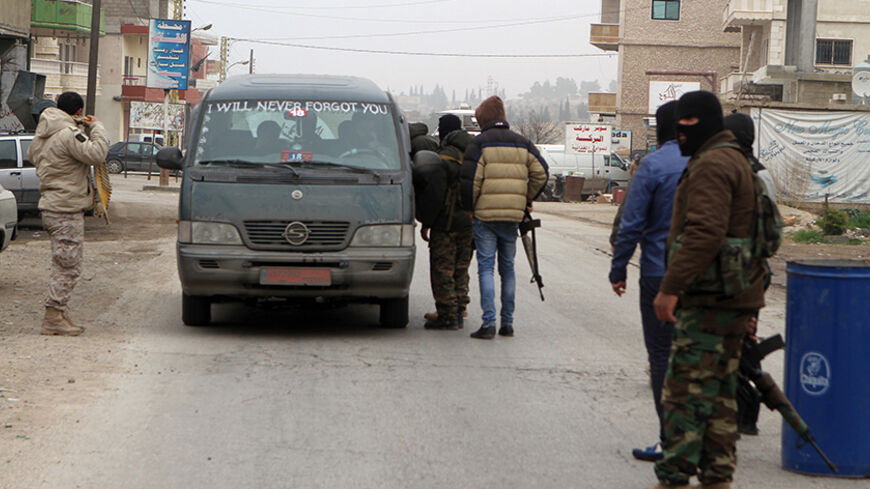 Masked gunmen man a checkpoint in the town of al-Bazzaliah, home of Lebanese soldier Ali al-Bazzal who was killed by Jabhat al-Nusra, on a road that links Arsal to Baalbek, Dec. 6, 2014. - REUTERS/Ahmad Shalha

On the evening of Dec. 5, Jabhat al-Nusra issued a statement announcing the execution of Ali al-Bazzal, a Lebanese army corporal. According to the statement, this execution came as a response to the Lebanese army’s unfair detainment of “the sisters,” a reference to Saja al-Dulaimi, former wife of Abu Bakr al-Baghdadi, and Ola al-Oqaili, the wife of the Syrian top jihadist Anas Sharkas, better known as Abu Ali al-Shishani.

The heinous crime shook the consciences of all Lebanese and put Lebanon more than ever in the eye of the storm, given the sectarian reactions it produced in a country on the edge of strife. This crime revealed retaliatory and even instinctive intentions, especially after the authorities’ failure to resolve the crisis of the kidnapped Lebanese soldiers detained since Aug. 2 by the Islamic State (IS) and Jabhat al-Nusra.

On the ground, gunmen from the Shiite town of al-Bazzaliah, the birthplace of Cpl. Bazzal, laid siege to the Sunni town of Arsal to cut it off from humanitarian and food supplies. The gunmen demand that Sheikh Mustafa Hujairi, aka Abu Taqiyyi, be handed over. Hujairi is the leader of an armed group that provides logistical support to al-Qaeda-linked groups such as Jabhat al-Nusra and IS. He is suspected of planning car bombings in the northern Bekaa Valley.

According to those demonstrating, the latter is coordinating with the jihadist organizations on the issue of the executions to put pressure on the Lebanese authorities. The best illustration of the despair caused by the crisis and the loss of confidence in the Lebanese state was expressed by some of the families of the kidnapped. In front of TV cameras on Dec. 7, female family members said they were willing to join IS to get closer to their children and try to save their lives. One of them yelled: “Our sit-ins are useless! … The mother of Ali al-Bazzal staged a sit-in for four months in front of the Grand Serail. What did she gain? Her son was executed. We decided to join the Islamic State. This way, we either come back with them or get killed with them.”

All of the Lebanese government's attempts to release the hostages through negotiations and foreign mediators, whether from Qatar or Turkey, have failed. A source close to the negotiations told Al-Monitor that the Turkish side did not appear enthusiastic from the beginning. Moreover, Qatar’s declaration on Dec. 7 of its inability to maintain its mediation efforts for the release of Lebanese soldiers brought down the last string of hope and brought back the situation to square one. In addition to its human brutality, the murder of Bazzal proved the incapacity of Lebanon's ruling elite, and this made this murder even more horrendous. It is true that dealing with abduction cases is not easy. Even powerful countries such as the United States were unable to release their hostages.

Yet, the biggest concern for the Lebanese situation is the absence of a clear government strategy to deal with this issue. The divisions within the ruling class on the adopted plan to free the hostages and the lack of coordination among security authorities leads to further frustration, in addition to media leaks that undermined the Lebanese authorities negotiating position.

Remarkably, Lebanese Interior Minister Nouhad al-Machnouk criticized the arrests of the wives and children of jihadist leaders, saying it is was a major mistake. Machnouk criticized the Lebanese intelligence services by saying that the authority that arrested these women is not the negotiating authority, i.e., Director General of General Security Abbas Ibrahim who is officially designated to handle the negotiations.

According to Machnouk, it would have been preferable if these women were not arrested and rather placed under strict surveillance without any information being leaked to the media, which would have given the Lebanese negotiator a trump card.

The source, who is close to the interior minister and informed on the matter, said, “The problem is that when the arrest was made and publicly announced, the matter took an institutional judicial path and thus can no longer be used as a bargaining chip. The arrest of these two women has turned into a weak point rather than a pressure card by the government.” The source added, “Whoever leaked the news of the arrest to the media is certainly well-informed of the ins and outs of this issue.”

The source said, “We showed delay in applying the principle of exchange,” in reference to the exchange of detained soldiers with individuals arrested by the authorities for being affiliated with jihadist organizations. In fact, some parties within the government, notably Hezbollah, were against the principle of exchange from the beginning on the grounds that it constitutes a submission to the logic of terrorism and kidnapping.

It is true that judicial decisions were issued against some of those who were arrested, but it is also true that the principle of exchange is widely applied in similar cases. Countries such as Israel and the United States have applied this principle. Hezbollah managed less than two weeks ago to release its detained member Emad Ayad, who had been held for weeks in the barren lands of Brital, in exchange for the release of two detainees affiliated with the Free Syrian Army, who Hezbollah had held hostage since the battle in Qusair.

“Why does Hezbollah enjoy a right that is not given to any other party?” asked the source.

The source wondered, “Why was the whole town of Arsal put under accusation of perpetrating the crime hours after the crime and why were the roads leading to it cut by the residents of al-Bazzaliah, who put the area under siege? Why was Bazzal’s wife, who is from Arsal, prohibited from heading to the town? Is there an intention to portray every Sunni Muslim as a terrorist?”

The real question is: Who benefited from the crime? Not Lebanon, which is a house for many sects and communities, or its institutions.