The hostage takers have demanded the demilitarization of areas on the Lebanese-Syrian border and the release of prisoners, both of which have been met with significant opposition by the Lebanese political establishment. 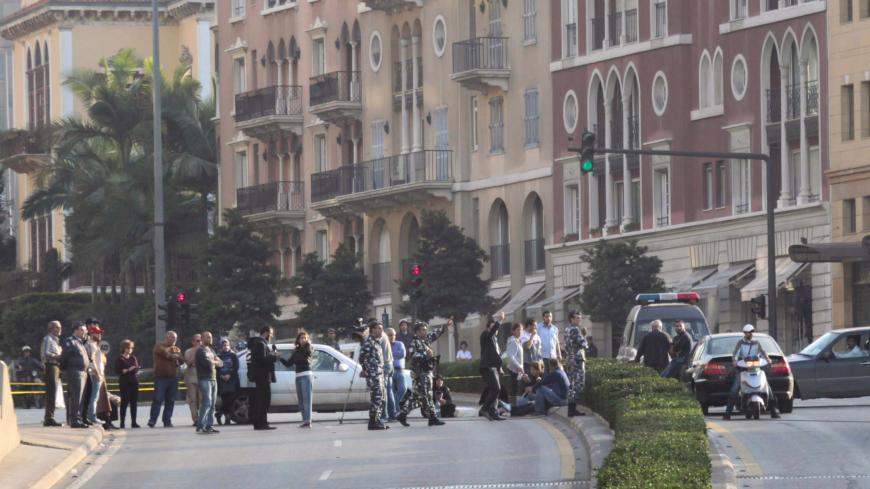 Relatives of Lebanese soldiers captured by Islamist militants in Arsal demand the release of the remaining soldiers, pressuring the government to act as families block a road in Saifi village in Beirut as part of a nationwide protest, Dec. 6, 2014. - REUTERS/Aziz Taher

BEIRUT — It has been more than five months since the kidnapping of Lebanese soldiers during the last Arsal battle by the Islamic State (IS) and Jabhat al-Nusra on Aug. 2. Various efforts have been made by a number of different parties to free the hostages, to no avail.

However, this issue has recently witnessed three major developments, according to security sources who closely follow the matter. The first development is IS’ attempt to control additional areas in Syria’s Qalamoun region, which is adjacent to the Lebanese-Syrian border. The second development is the lack of cohesion at the level of the Kidnapped Families’ Committee. As the recent statement of the brother of one of the kidnapped said, “The people of the military committee do not represent all the people and we will not commit ourselves or acknowledge it.” The third development is the list of demands from Sheikh Wissam al-Masri, one of the negotiators who recently took part in the efforts to release the soldiers.

Masri, an imam and a preacher at Abu Anwar Mosque in the gold market in Tripoli named as a mediator by Jabhat al-Nusra in December, belongs to the Salafist movement. He is described as “moderate” and is one of the sheikhs who signed the document of understanding between Hezbollah and the Salafist movement in Lebanon in 2008. But the document was quickly frozen following harsh criticism from other Salafist parties, who described it as "a joke.”

The mediation of Masri received no encouragement from the Association of Muslim Scholars nor from Sunni political forces. A few days later, the name of a new negotiator emerged: Ahmed Fliti. Fliti is Arsal’s deputy chief of the municipality and is close to the Future Movement.

Before Fliti could cause any change on the ground, Masri’s name returned to the forefront. He met with IS representatives, who set three conditions in order for the soldiers to be released. First, they called for the protection of Syrian refugees from Hezbollah attacks through the establishment of a demilitarized buffer zone between the areas of Wadi Hmeid, the surroundings of Tufail and the border region of Arsal. The second condition was to secure modern hospital equipment with a comprehensive drug warehouse to treat those people wounded in the Hezbollah attacks on Syrians. The third condition was to release all Muslim women held in Lebanese prisons due to the conflict in Syria. Masri also conveyed IS’ pledge not to kill any soldier in the event that the Lebanese state releases two detained women: Saja al-Dulaimi (ex-wife of IS emir Abu Bakr al-Baghdadi) and Ola al-Oqaily (wife of Abu Ali al-Chichani, brother of a Jabhat al-Nusra leader).

What do these demands mean militarily? And what are the odds of Lebanon accepting them?

The same sources said that what is remarkable about these conditions is that IS is using Hezbollah’s danger to displaced Syrians as a pretext. Linking this danger to the army will inevitably be met with rejection in Lebanon, particularly among Sunnis.

The sources explained to Al-Monitor the dimensions of these three conditions. According to them, demanding a buffer zone infers the absence of any armed forces, be they legal or not, in this area. This implies the removal of military positions in this region, on the Lebanese side of the border, despite the fact that the army had beefed up its presence in the vicinity of Arsal and its surroundings following the Aug. 2 battles. But on the other side of the area, Hezbollah has a wide presence to protect the Lebanese Shiite villages down to Tufail on the Syria-Lebanon border. The sources confirmed that the implementation of the first demand is “unacceptable and impossible” when considering the principle of national sovereignty, which is entrusted to the army. The army has never left its posts following pressure from various groups.

Moreover, the army’s withdrawal from the region would turn it into a safe haven for terrorists. This would make it easier for the armed groups’ dream of establishing a mini-state to come true.

In addition, withdrawing from Tufail is impossible for Hezbollah, as the party has always been proud of its political and military support for the Syrian regime. Moreover, Hezbollah has repeatedly rejected calls for its withdrawal from Syria and to stop intervening in the war.

The sources added that the clearest proof of the difficulty of achieving Hezbollah's withdrawal from Syria is the exclusion of this topic from the agenda of the ongoing dialogue between Hezbollah and the Future Movement, due to the impossibility of achieving a positive outcome at this point.

As for the demand to secure a hospital to treat the wounded, it practically means a safe haven and treatment for all terrorists who point their guns at the Lebanese army, if they are injured. Moreover, such a hospital would stop the wounded from going to the Lebanese hospitals to avoid arrest or prosecution. The sources recalled the army’s success in arresting the emir of the Abdullah Azzam Brigades, Majid al-Majid and the terrorist Jamal Defterdar after they were spotted being taken to a hospital for treatment. The sources said that this demand will also be rejected by the Lebanese government.

The third condition conveyed by Masri was releasing all Muslim women held in Lebanese prisons who were involved with the Syrian conflict, as well as Dulaimi and Oqaily. The sources said that demanding the release of these women has become more important than the demand made by the two organizations to release Islamist detainees in prisons. This change, the sources added, emerged with the arrest of Joumana Hmeid, who was driving a booby-trapped car from the outskirts of Arsal toward Lebanon. This shift in priorities developed following the arrest of Dulaimi and Oqaily. In light of the different circumstances behind these three cases, sources said the release of Hamid has been ruled out, particularly after she was detained on a flagrant felony. However, Dulaimi and Oqaily’s files are still under consideration. Although the charge of transferring money and having links with terror organizations has been proved, their release is still possible.

Masri’s initiative was not met with concrete consideration in political circles. It was not even put on the government’s negotiation table. From the beginning, it lacked seriousness, as it violated the basic negotiation condition that was recently agreed upon, namely confidentiality. Thus, the only constant factor on the part of Lebanon so far is the appointment of Maj. Gen. Abbas Ibrahim to handle the hostages’ files.