Arsal: The battle that begins a long war

The Arsal agreement reached between the Lebanese military and government parties and the militants indicates that the two parties are betting on different factors. 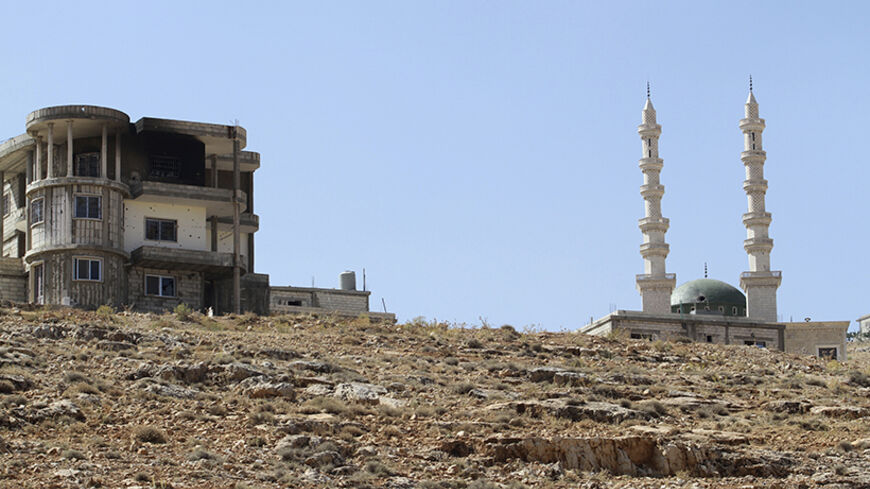 Damage is seen on a building and a mosque from the fighting between Lebanese army soldiers and Islamist militants in Arsal, in the eastern Bekaa Valley, Aug. 7, 2014. - REUTERS/Ahmad Shalha

A long chain of criticism delayed the settlement reached between the government, Lebanese military and Sunni fundamentalist gunmen to end the clashes in Arsal. Yet, ministerial and partisan figures directly engaged in the agreement confirmed to Al-Monitor that “the matter is not yet over, and that the truce declared on the night of Thursday, Aug. 7, marked no more than the conclusion of the first round of the war.”

As previously reported, the clashes began in this border region between Lebanon and Syria on Aug. 2. These clashes followed the Lebanese army’s detention of an individual wanted for his involvement with terrorist groups linked to al-Qaeda. Afterward, fundamentalist militants from the Islamic State (IS) and Jabhat al-Nusra launched a string of attacks against Lebanese military outposts, killing more than 20 members of the Lebanese Armed Forces and capturing 42 Lebanese members of the security forces, 22 from the army and 20 from the Internal Security Forces.

Open conflict between the two parties then began in tandem with negotiations between the Lebanese government and military leaders and the armed groups through the mediation of a group of Salafist sheikhs connected to the fighters. On the night of Aug. 7, these parties agreed to an unexpected settlement. It required that the gunmen withdraw from Arsal to its barren lands, still within Lebanese territory. Though the fighters released three soldiers during the negotiations, they were allowed to move the remaining 39 soldiers still in their possession.

What made this settlement possible? Ministerial and other sources with connections to Hezbollah who were involved in the Arsal operation and negotiations provided Al-Monitor with an answer to this question.

First, it would have been impossible for the Lebanese security forces engaged in the battle for Arsal and its environs to score a decisive victory. The number of militants is still unknown, and in addition to those who have taken positions in the hillsides around the city, many seem to have emerged from the Syrian refugee camps in Arsal. The number of registered refugees in these camps is around 123,000, meaning that there are enough fighters in the area to plunge it into catastrophe.

Second, as noted, the army found itself facing the impossibility of decisive victory. Likewise, the al-Qaeda-linked militants found themselves facing a similar predicament, because it would have been difficult for them to capture territory outside of Arsal and to retreat into the Syrian territory. They have been besieged from the east by the Syrian military and by Hezbollah fighters who have begun to search the mountains and close the fundamentalist militants’ smuggling routes. Moreover, clashes in Arsal itself have prevented the militants from accessing their main source of supplies. Their various logistical needs, including military supplies, were delivered to them by Lebanese living in Arsal or nearby who are either sympathetic to the militants or opposed to the Syrian authorities. The militants also realized that it is entirely useless for them to continue the battle inside Arsal since they lack the necessary reinforcements to continue fighting or even survive.

The same sources told Al-Monitor that the Lebanese military and the militants alike were ready to reach a settlement that would save each of them from their respective dilemmas. The sources revealed that the mediation of the Salafist sheikhs conveyed a demand by the militants for the guarantee of the movement of a large number of them — no less than 1,500 fighters — from the hillsides of Arsal to Raqqa province in northeastern Syria, which is controlled by IS. This would have amounted to an agreement between the Lebanese and Syrian authorities to guarantee the protection of a small army during its movement in an enemy area of more than 500 square kilometers (193 square miles), which the Syrians quickly refused. Meanwhile, conditions worsened for both sides, the choices became more limited for the army and the militants alike, and the situation became ripe for a settlement. The militants withdrew to the barren lands around Arsal without any guarantees about their continued presence, which is threatened by the siege pushing toward them from the east. Likewise, the Lebanese authorities accepted that the captured Lebanese soldiers would remain in the possession of the withdrawing militants.

What does this strange settlement mean? The same sources confirmed to Al-Monitor that this agreement was made on the basis of two implicit considerations: The fighters have withdrawn to an unsafe area, but are betting on being able to launch other pro-IS revolts inside Lebanese territory or in a neighboring state, once again allowing them to disturb Lebanon’s affairs. They make this gamble knowing that their continued possession of 39 Lebanese soldiers gives them breathing space. For their part, the Lebanese authorities accepted this agreement, wagering that the scales would tip against IS in the regional battle against that group, which is taking place from northwestern Iraq to Syria and the hillsides of Arsal. In addition, the Lebanese authorities themselves trust that Hezbollah fighters will continue to advance in the hillsides east of Arsal and besiege the fighters in their new positions. The end of summer and the arrival of the deadly frost in the hills, some of which reach 2,500 meters (8,202 feet) above sea level, will aid Hezbollah in their siege.

Therefore, it seems that the Arsal agreement was the result of IS’ confidence in its possession of 39 captured Lebanese soldiers, and the Lebanese authorities’ bet on the siege by “General Frost” against the militants after more than 40 days. Taken together, these two wagers result in a single conclusion: The battle that took place in the first week of August in Arsal was nothing but the first round of a longer war.