Christians in Aleppo fear an uncertain fate; Iran’s decisive role in the appointment of Haider al-Abadi as Iraqi prime minister-designate; battle for Arsal may not be over yet; Netanyahu is Israel’s "weakest prime minister" ever; lobbying profiles of Gulf countries to be released. 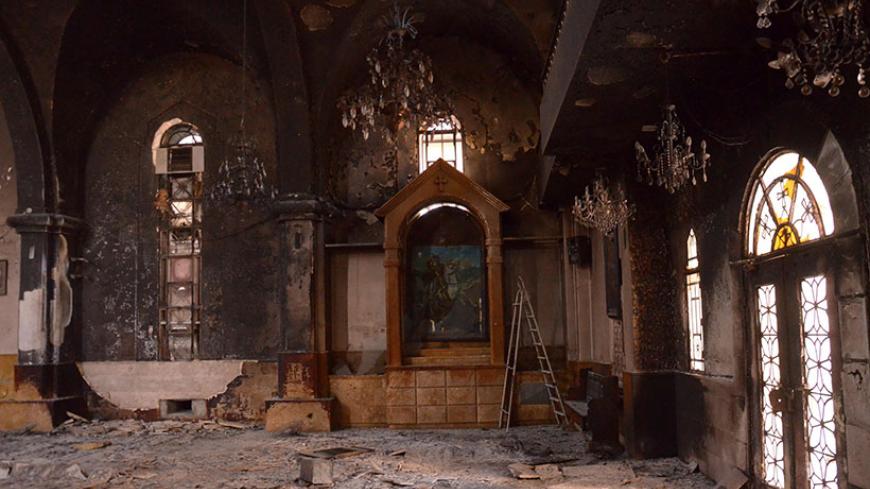 While the dire situation of Iraq’s Yazidis provoked US military intervention against the Islamic State (IS) and nonstop media coverage, Aleppo’s Christians fear they are the war’s forgotten victims.

As Syrian government forces prepare for what may be a decisive battle against armed groups in Aleppo, Edward Dark reports that for Aleppo’s Christians, “fear of a new kind permeates this ancient and deeply rooted community. Genocide and ethnic cleansing are very real threats that haunt the collective conscience of Syria’s Christians. The terrible fate that befell their co-religionists across the border in Mosul has driven these points home in a rather blunt and frightening way.”

Most Christians in Syria have attempted to remain neutral in the three-year civil war, yet they find that, regardless of their political affiliations, they remain targets:

"Not all Christians in Aleppo support the regime; in fact, a large number of them do not, but equally significant is that you won’t find any that support the rebels, either. The recent repeated rebel shelling of the Syriac Catholic Church, a large and iconic building in the heart of the old Christian community at Azizeh, is seen by many as a clear message by the rebels, revealing their true intent toward their community.”

The plight of Syria’s Christians is a human rights crisis of historic proportions.

The State Department’s International Religious Freedom Report for 2013, released last month, notes: “In Syria, as in much of the Middle East, the Christian presence is becoming a shadow of its former self. After three years of civil war, hundreds of thousands fled the country desperate to escape the ongoing violence perpetrated by the government and extremist groups alike. In the city of Homs the number of Christians dwindled to as few as 1,000 from approximately 160,000 prior to the conflict.”

Meanwhile, for many of Aleppo’s residents, electricity has become a “luxury,” reports Mohammed al-Khatieb:

"The situation in Aleppo is complicated as the province is divided between the regime, the rebels and the Islamic State (IS), with each party controlling part of the electrical grid. Aleppo’s main source of electricity used to be the thermal power plant in the eastern countryside, which has been out of service since June 2013 due to malfunctions caused by the battles raging around it. The plant is currently under the control of IS.

"Aleppo receives electricity through the Zorba line, which is an alternative line coming from the central region. Both the regime and the rebels control parts of it. Thus, any outage practiced by any party against the other will be treated with reciprocity, i.e., an electricity outage for all of Aleppo."

Ali Hashem reports this week on Iran’s role in brokering the deal that led to the appointment of Haider al-Abadi as prime minister-designate, replacing Nouri al-Maliki.

According to Hashem, Iran Supreme Leader Ayatollah Ali Khamenei decided to back Abadi after learning of Iraqi Grand Ayatollah Ali Sistani’s rejection of Maliki staying on as prime minister.

Ali Mamouri reported earlier this month on the tension between Maliki and Sistani prior to Abadi’s appointment.

Hashem reports that Ali Shamkhani, the secretary of the Supreme National Security Council in Iran, appears to be taking charge of the Iraq file:

“In Tehran, the murmurs that Shamkhani will oversee the Iraq file have gotten louder. This is an indication that Iran is about to adopt a new policy, given Shamkhani’s historic relations with the Gulf countries and Iraq, his wide experience in dealing politically with regional conflicts and his closeness to Khamenei, all without ignoring the fact that he’s an Iranian of Arab origins.”

In an interview with Al-Monitor in April 2013, Abadi said that the dispute between Baghdad and the Kurdistan Region could lead to the “disintegration of the country” if not handled properly. Abadi also warned that terrorist groups in Syria were targeting Iraq, and that “it would be a shame that we should allow al-Qaeda to regroup.”

The challenge of IS to the next Iraqi government is complicated by a deterioration in Arab-Kurdish relations in towns bordering the Kurdistan Region.

Wladimir van Wilgenburg reports this week from Gwer, Iraq, which is 18 miles outside the main checkpoint leading to Erbil, the capital of the Kurdistan Region, that the rapid advance of IS in Iraq has frayed relations between Arab and Kurdish residents:

“Many Kurds now worry that Arabs will form sleeper cells in Kurdish cities after the Islamic State's major attacks against Kurdish towns in early August. Reports suggested that many displaced Sunni Arabs sympathized with IS militants, with some sympathizers arrested by the Asayish, the Kurdish security police.”

Although Lebanese forces have reclaimed Arsal after negotiating a withdrawal by Islamist militants, the settlement brokered by Muslim clerics may offer only a temporary reprieve.

Jean Aziz writes that the "agreement was made on the basis of two implicit considerations: The fighters have withdrawn to an unsafe area, but are betting on being able to launch other pro-IS revolts inside Lebanese territory or in a neighboring state, once again allowing them to disturb Lebanon’s affairs. They make this gamble knowing that their continued possession of 39 Lebanese soldiers gives them breathing space. For their part, the Lebanese authorities accepted this agreement, wagering that the scales would tip against IS in the regional battle against that group, which is taking place from northwestern Iraq to Syria and the hillsides of Arsal.

"In addition, the Lebanese authorities themselves trust that Hezbollah fighters will continue to advance in the hillsides east of Arsal and besiege the fighters in their new positions. The end of summer and the arrival of the deadly frost in the hills, some of which reach 2,500 meters (8,202 feet) above sea level, will aid Hezbollah in their siege."

Esperance Ghanem writes that one of the causes of these clashes is the Syrian refugee camps established in Lebanon:

"Remarkably, from a geographic viewpoint, the largest number of refugee centers are located in areas sympathetic to the Syrian opposition, among them Arsal, which formed an environment that facilitated their movement and provided them with services and protection. According to security sources, this reality on the ground encouraged a considerable number of Syrians to seek refuge in Lebanon when wounded in fighting inside Syria. It also engendered an amenable environment for some to commit crimes such as kidnapping, robbery and drug trafficking for monetary gains, culminating in their involvement in car bombing attacks and murder."

Ben Caspit rejected Obama’s assertion in an Aug. 8 interview with Thomas Friedman of the New York Times that Israeli Prime Minister Benjamin Netanyahu is politically strong in Israel as a result of the Gaza war. Instead, Caspit argues “that Netanyahu is the weakest prime minister in Israel’s history. Never before have we had a weaker premier.”

Netanyahu is facing challenges from within his own coalition, so Caspit rules out polls showing solid support during the Gaza conflict. The verdict will come after. Caspit does not share Obama’s analysis of Netanyahu’s staying power.

“Will Netanyahu be unseated in the coming months? Although this is hard to believe, it is nevertheless possible. Does he have a significant rival right now to vie for the premiership? Probably not. But as was explained earlier, this does not mean that he is strong. Netanyahu is a weak, petrified and a listless leader,” writes Caspit.

On Aug. 17, Al-Monitor’s series on Middle Eastern countries’ lobbying efforts will continue with the release of profiles for Bahrain, Qatar, Saudi Arabia and the United Arab Emirates.