The electricity network in Aleppo has been severely damaged by the war, with power outages of more than a year in some neighborhoods. 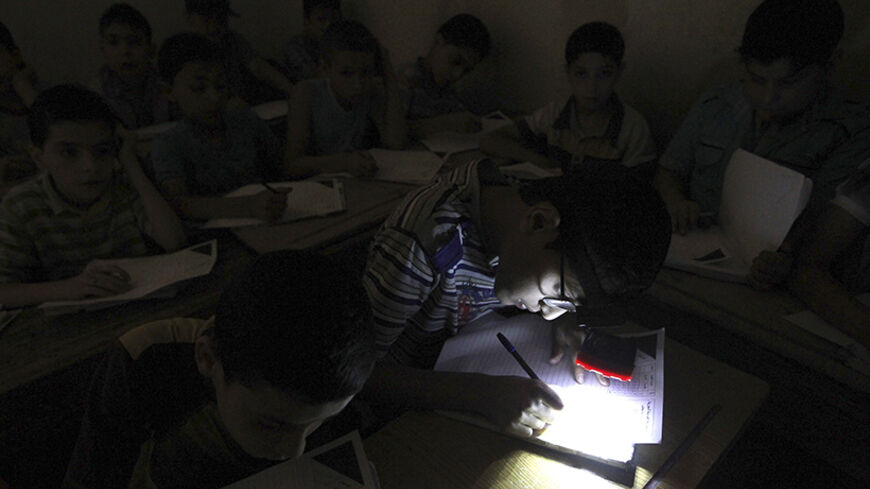 A student wears a headlamp, due to an electricity shortage, as he takes his year-end examinations at a school in Aleppo, June 5, 2013. - REUTERS/Muzaffar Salman

ALEPPO, Syria — A lonesome darkness hangs over this war-ravaged city. It is as if time has gone hundreds of years back, to an era when electricity was not yet discovered. Near the rubble of destroyed buildings, among dozens of desolate buildings, light emanates from some balconies that are still inhabited, which gives you the feeling that there is still life here. You are in Aleppo, the economic capital and second-largest city in Syria.

For Aleppo residents, electricity is no longer a basic requirement: Its continuous interruption has led them to gradually dispense with it. Having electricity has turned into a luxury.

Many residents have even sold their electrical tools, their TVs, washing machines and irons, among other appliances that they no longer use. As for the refrigerators, they were turned into water tanks, or even libraries, whereas microwaves became used as storage for supplies.

As you walk on the streets of Aleppo, you may be surprised by a lively neighborhood where children can be seen celebrating, women heard uttering cries of joy to the sound of intermittent gunshots. No, those detained by the Syrian security services have not been released, nor has the war stopped. Electricity is back in this neighborhood.

The duration of the power outage differs from one neighborhood to another. Neighborhoods controlled by the regime don't experience long outages, unlike the ones controlled by the opposition. These are exposed to daily shelling operations that cause permanent damage. The breakdowns occur in areas of clashes. In some cases, the power outages have been ongoing for more than a year.

For example, Al-Firdaws neighborhood has been suffering from a power outage for a year and three months due to a malfunction in the electricity plant, which distributes power to the neighborhood. The maintenance teams failed to repair the breakdown until the opposition placed pressure on the regime to secure an alternative line to the neighborhood on May 13.

Aleppo gets electricity based on the principle of “Give me electricity, and I will give you …” The situation in Aleppo is complicated as the province is divided between the regime, the rebels and the Islamic State (IS), with each party controlling part of the electrical grid.

Aleppo’s main source of electricity used to be the thermal power plant in the eastern countryside, which has been out of service since June 2013 due to malfunctions caused by the battles raging around it. The plant is currently under the control of IS.

Aleppo receives electricity through the Zorba line, which is an alternative line coming from the central region. Both the regime and the rebels control parts of it. Thus, any outage practiced by any party against the other will be treated with reciprocity, i.e., an electricity outage for all of Aleppo.

In an interview with Al-Monitor, Ahmad Derry, director of the local administration affiliated with the opposition, said, “The high tension cable reaching Aleppo through the Zorba line does not meet the needs of the province. Moreover, taking advantage of it is often impossible because of the damage inflicted to the grid.”

There is never electricity for more than six hours per day, at best, as electricity is alternatively distributed to the neighborhoods of the city. Add to this the breakdowns in the Zorba line, which occur on a weekly basis. This is causing all of Aleppo to suffer from electricity interruption, as this line is the city’s sole electricity source.

“The regime wants to disrupt life in the liberated areas. Therefore, it is deliberately targeting the infrastructure there. The vicinity of the Hanano station was targeted with three barrels. Moreover, the two Aleppo stations of Al-Qadima and Sakhour were shelled, and the repair of these stations is very expensive and difficult,” Derry added.

The neighborhoods of east Aleppo have become ghost neighborhoods now that most of the population has been displaced since the explosive barrel bombing campaign on the city, which has been ongoing for about eight months. The western Aleppo neighborhoods, such as the Saladin, al-Ansari and al-Zabidiya neighborhoods, which are still controlled by the opposition, are still vibrant. This led to the spread of generators, or what have become known as “amperes.” An investor runs a large-capacity generator and distributes electricity to the residents of the neighborhood through weekly subscriptions defined by specific amperage.

Rami, a resident of the district of Saladin said, “We are fed up with the continuous power outage. It is no longer possible to rely on electricity from the grid. There are no specific dates for the return of electricity, and in many cases, as soon as electricity is back, another malfunction occurs.”

“Despite the cost of subscription to generators, these remain the only solution for the moment, and we don’t have another choice. I subscribed to two generators, which is enough for me to turn on the television, the fan and light the house. As for the washing machine and fridge, we wait for the return of [normal] electricity to run them,” he said.

The absence of electricity has had a direct impact on other service sectors: The water network needs round-the-clock power for its pumps to provide water to all the city's neighborhoods. Thus, the continuous power outages lead to water cuts as well, which causes crises that further increase the suffering of citizens, who are already plagued by the risks of bombing, murder and arrest. At a time when there are no sincere intentions to neutralize the service sectors from the war, it seems that the suffering of the population will worsen by the day.