Turkey plans to help restore utilities and other services to Syrian towns, starting with a new power plant for the city of Azaz, which has been running on generators. 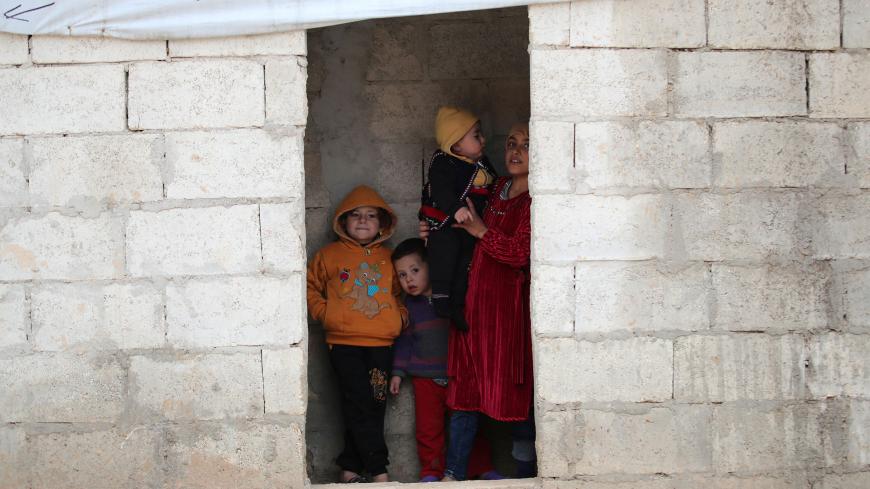 Internally displaced Syrian children look out from their shelter in a camp on the outskirts of Azaz, Syria, Jan. 26, 2018. - REUTERS/Umit Bektas

ALEPPO, Syria — A Turkish company will build a power plant to provide electricity to the city of Azaz in northern Aleppo province, and Ankara hopes to eventually help provide electricity and other services to the cities and towns damaged in Turkey's Operation Euphrates Shield military intervention.

The local council has prepared land about 1 kilometer (0.6 mile) east of Azaz for the private Turkish company Akenerji to build and operate a thermal power station. Full details about the project will be announced after the station is built, engineer Mohamed Omar, the technical services director in Azaz's local council, told Al-Monitor. The council signed a contract with Akenerji on March 2.

Akenerji has launched construction work, starting with the plant’s foundation, said Omar, adding that maintenance workshops of the electrical network in Azaz are up and running, replacing inoperative cables and erecting new electricity towers in order to reach all neighborhoods.

Ahmad Qaraan, an engineer and member of the local council's service office, told Al-Monitor that the Turkish government has promised residents it will help provide electricity and more services to other Syrian towns that were affected by Operation Euphrates Shield, including Marea and al-Bab. Those services will include improving drinking water networks and sanitation services, paving roads and extending telephone lines to residences.

Azaz has a local electric company whose employees will follow up on the work of the power station after it is constructed. These workers will be responsible for maintaining the electrical grid in the city.

Omar noted that the thermal power station will provide 30 megawatts of electricity and will require more than 100 workers. About 90% of workers in various jobs will be Syrian, and 10% will be Turkish managers and technicians.

"Turkey will directly sponsor the project and all revenues will be divided between Azaz’s local council and Akenerji. But the shares of profits of each party is yet to be determined. Under the contract, Akenerji will finish building the station within three months as of the date of commencement, March 24," Omar told Al-Monitor.

He said that power lines will be connected directly to homes through cables. Akenerji will provide new electricity meters, and Azaz’s local council has started asking contractors in charge of new residential construction in Azaz to prepare the underground electrical installations.

It hasn't been determined yet how much the residents will have to pay for the service. The amount of electricity the city needs also isn't known, but the station, according to Omar, will do the job, and the service will not be expensive. It will definitely be cheaper than paying for private generators.

Firas Mawla, the director of the media office in Azaz’s local council, told Al-Monitor, “The people in Azaz have been relying on electricity generators for 12 hours a day. Residents pay a monthly fee of 8,000 Syrian pounds [$15.50] per ampere, and each household requires at least 3 amperes to be able to run electrical appliances such as the washing machine, television and lights. In this case, each household pays $60 a month.”

After the 12 hours of generated light, there is a 12-hour blackout during which residents use candles and rechargeable batteries.

"If there is a power station, the situation will change a lot and electricity will be available 24 hours a day. The financial cost will be about [50%] less and electricity reaching households will allow for running several electrical devices at once," Mawla said.

“Residents are tired of paying large sums of money to receive electricity from generators, which often break and end up ruining their appliances. Electricity can indeed breathe life into our city,” he told Al-Monitor.

Jarablus is the only city the Turkish government has been providing with electricity, and it has done so since September 2016, shortly after Jarablus was liberated from the Islamic State as part of Operation Euphrates Shield, in which the Free Syrian Army participated alongside the Turkish army.