Turkey to supply electricity to opposition-held areas in Syria

Authorities affiliated with the opposition in the cities of Tell Abyad and Ras al-Ain in northern Syria recently signed an agreement to import Turkish electricity, as the Syrian regime forces and the Syrian Democratic Forces continue to control the feeding stations of these areas. 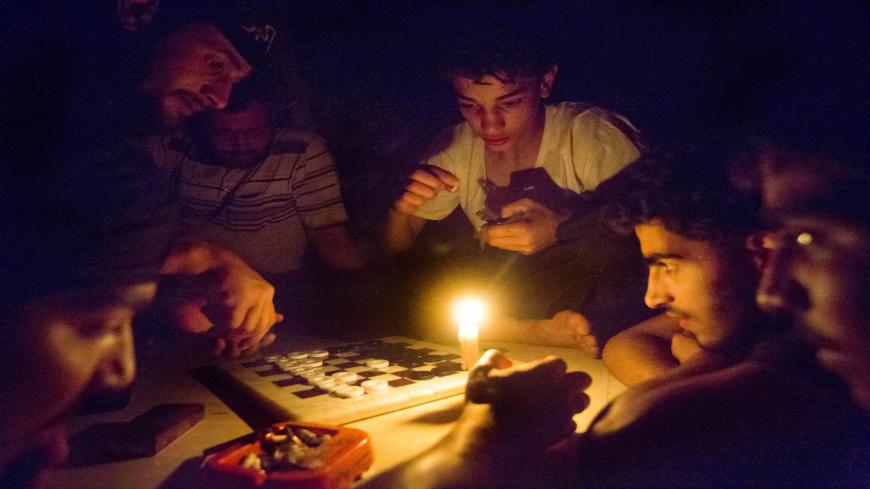 Syrian rebel fighters play a game by candle light, due to electricity cuts in Adana, near the northeastern city of Deir ez-Zor, May 26, 2013. - Ricardo Garcia Vilanova/AFP via Getty Images

The towns and villages of northeastern Syria that have been under the control of the armed opposition factions since the end of Operation Peace Spring on Nov. 23, 2019 — which these factions, backed by Turkey, waged against the Syrian Democratic Forces (SDF) — are constantly suffering from frequent power outages as the power stations feeding them are concentrated in SDF-controlled or regime-controlled cities.

AK Energy already supplies electricity to Azaz, Jarablus, Jindires and al-Bab in the northern and eastern countrysides of Aleppo.

Under the agreement, which was the result of several meetings between the concerned parties, residential homes in the area will be supplied with electricity at a price of 67.5 Turkish piasters ($0.09) per kilowatt at the earliest possible opportunity.

Agricultural submersible transformers will also be fueled by electricity imported from Turkey under the agreement, as the area is highly dependent on agricultural resources.

Merhi al-Youssef, head of the local council of Ras al-Ain city, told Al-Monitor, “Ever since the Free Syrian Army [FSA] factions took control of Ras al-Ain city, there has been an indirect agreement with the Syrian regime to supply electricity to the areas under our control, by operating water turbines to supply water. However, over the past period, the regime took advantage of the fact that power stations feeding the city of Ras al-Ain are located in its areas to cut off electricity to the area. This caused great damage as the water turbines stopped pumping, leaving the city without water for a long period of time. Add to this the damage caused to agricultural crops due to the lack of irrigation.”

He said, “Despite the continuous pressure placed on the Syrian regime, it only accepted to supply the city of Ras al-Ain with 12 hours of electricity. Every time it is asked about the matter it blames the SDF for cutting off the electricity. As we were unable to find a solution to this problem with the Syrian regime, we announced a tender to supply the cities of Ras al-Ain and Tell Abyad with 12 hours of electricity per day to stop power outages and pave the way for industrial projects, all the while compensating agricultural land owners for the losses they incurred."

Youssef added, “The Turkish company AK Energy’s bid was the best, as it offered a price of 67.5 Turkish piasters per kilowatt hour. The company was given a period of two months to study the area, assess its needs and develop an executive plan to take practical steps aimed at maintaining networks and towers in the area that had been hit by bombings — all the while extending high-tension networks and feeding the city with electricity. There will be prepaid electric meter cards charged with an amount of money for each household based on their needs. Once a household’s balance expires, the card is to be refilled. A certain percentage of the profits collected from the subscribers is given to the local council."

Mohammed Saeed Suleiman, minister of local administration and services in the Syrian opposition's self-styled interim government, told Al-Monitor, “These contracts are directly concluded between the local councils and private companies under the sponsorship of Turkey. They are not concluded with us as an interim government.”

Turkey attaches great importance to the areas that were controlled by the FSA such as the Euphrates Shield, the Olive Branch and the Peace Spring areas in northeastern Syria. It provides relief, medical and educational services to such areas amid large-scale private Turkish investments targeting the basic service sectors that citizens need on a daily basis as well as profitable sectors, such as electricity and construction, among others.

He noted, “The tender was awarded to the Turkish AK Energy company given its knowledge of the region’s geography, demographics and the financial capacity of its population. The company [already] works in [other] areas controlled by the FSA and supplies the cities of Azaz, Jarablus, Jindires and al-Bab with electricity. This is what prompted us to accept its bid. In addition its experience could be of help to avoid the mistakes and problems that occurred at the beginning of its work in these cities.”

Hamdu concluded, “The project mainly targets the industrial sector to launch new projects that contribute to creating job opportunities and employing the workforce in the area. We are also targeting service, health and educational centers such as bakeries, schools, municipal buildings and local councils. In light of the area’s heavy reliance on agriculture, it was necessary to resort to a Turkish company to make up for the losses incurred by the actions of the SDF.”