The Syrian Democratic Forces continue to cut power in the areas under the control of the Turkish-backed opposition in northeast Syria, under the pretext that Turkey is responsible for the drop in water levels in the Euphrates River. 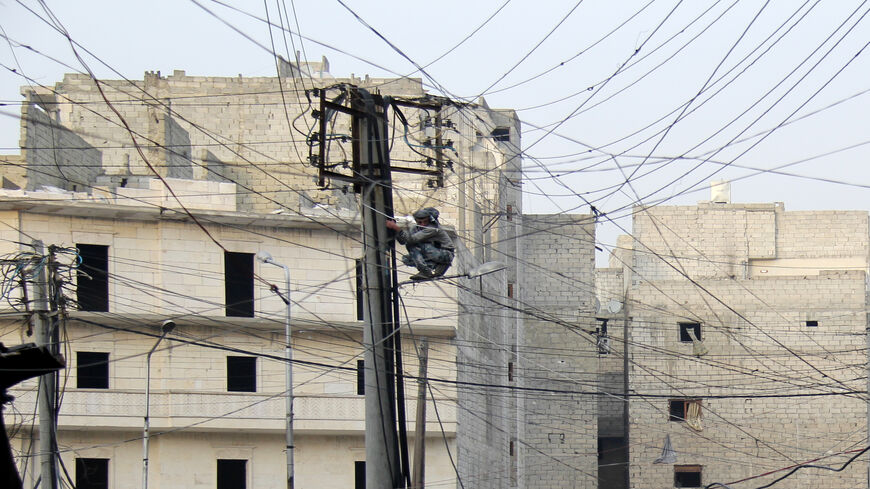 The power cuts continue although the damage to the high-tension 230-kilovolt line supplying the area with electricity from the Tishrin Dam was repaired May 4, after it was struck by SDF shelling.

After the repair works were completed, the SDF agreed to feed the Peace Spring areas with 30 megawatts of electricity from 6 a.m. to 10 p.m. daily. But the SDF failed to go through with the agreement. Instead it cut off power from the Alouk station near Ras al-Ain for two whole days, which cut off water to Hasakah.

Mohammed Ali al-Hosho, head of the Ras al-Ain local council affiliated with the opposition, told Al-Monitor, “The local council does not know the reason for the ongoing power outages in the cities of Tell Abyad and Ras al-Ain. Direct negotiations are taking place between the Turkish and Russian sides. The recent repair of the electricity tower feeding the area after it was shelled by the SDF was delayed by about 10 days because the SDF had initially blocked the repairs."

He said, "The works eventually began after coordination between the two sides [Turkey and Russia] since the tower is located in a confrontation area. Turkey informed us that the area would be supplied with electricity after the end of the repair works, as per the agreement. But this did not happen. Meanwhile, the SDF claims the power cutoff is due to the drop in water levels flowing downstream in the Euphrates River. Most power-generating turbines have stopped working as a result of the Turkish seizure of the Euphrates water, according to the SDF.”

Hosho noted, “We are no longer informed of the amount of water supplied by the Alouk water station to Hasakah province, which is supplied with electricity by the Darbasiyah station in the areas under SDF control. Turkey has sacked former employees from the Alouk station, who would provide us with information on the number of wells and the quantities of water that the station can pump so that we allocate part of these quantities to the area. Turkey appointed employees affiliated with it instead. The cities of Ras al-Ain and Tell Abyad have been severely affected by the shortage of water in our region. These are agricultural areas where irrigation depends on wells that run on electricity.”

Of note, although Turkey supports the local councils in the areas under the control of the opposition, it does not inform them of all the details, especially the security issues related to the SDF.

Hosho added, “We concluded a contract with a Turkish electricity company in order to supply power to the area amid the SDF’s and the Syrian regime’s monopoly over the electricity connected to the area. Work on extending the power lines began in the city of Tell Abyad. The company is expected to complete its work and start operating in the city of Ras al-Ain after the Eid al-Fitr holiday. However, all areas of Ras al-Ain will remain without electricity until then if the problem [of the SDF cutting off electricity] is not resolved between Russia and Turkey. The two countries are negotiating a deal to push the SDF to supply electricity to the area.”

He continued, “Water scarcity has placed the area at a dangerous turning point. The health sector in the area [of Tell Abyad and Ras al-Ain], where about 350,000 people live, has been seriously undermined by this crisis. This coincides with the advent of summer, rising temperatures, and the spread of germs and epidemics. Under international human rights law, all parties to an armed conflict must protect civilians’ rights to minimum standards in water supply and sanitation, nutrition, food aid, shelter and site planning, and health services.”

The decline in the water level has led to a decrease in water reserves in the Tishrin and Euphrates dams lakes. Most electricity generating turbines installed on the two dams went out of service due to the water shortage. This led to more power outages in the cities of northeastern Syria.

Turkey confirms the water level drop in the Euphrates River is caused by drought and the decline in rainfalls in southern Turkey. The Turkish State Meteorological Services published in April a map illustrating the level of drought that hit southern Turkey bordering the regions of northeastern Syria.

Al-Monitor contacted the co-chair of the Dams Authority of the SDF-affiliated Autonomous Administration of North and East Syria. He declined to answer and refused to provide any information on the matter.

Anas Shawakh, a researcher at the Istanbul-based Jusoor Center for Studies, told Al-Monitor, “The SDF is cutting off electricity to the opposition-controlled areas to pressure Turkey to supply the region with water. On Jan. 27, the Turkish side reduced Syria’s share of the Euphrates water to a low level of about 200 cubic meters of water, dropping from 500 cubic meters per second. This led to a decrease in the level of the lakes [of the dams of the river] to 320 square meters. At this level, the Tishrin Dam cannot be used to generate electric power."

He said, "This is the pretext the SDF is invoking to justify the reason behind the power outages in the area. The SDF is claiming the power outages are not limited to the opposition-controlled areas, but also to areas under its control.”

Shawakh noted, “Meanwhile, the SDF is the one responsible for the drop in the water level that takes place annually at the same time and for several reasons. The Dams Authority’s mismanagement of the strategic reserves in the lakes further exacerbated the water level drop. It [the authority] let rainwater flow through dams and generated electricity to sell it, instead of storing it in the lakes, to avoid such crises."

He added, "The low water level of the Euphrates is not technically related to cutting off electricity to the opposition-controlled areas. According to our sources at the Autonomous Administration, most of the turbines in the dams are still working to generate electricity and supply a large part of the administration’s areas with electricity.”