The Kurdish-led autonomous administration in northeast Syria is looking for alternative projects to make up for the suspension of operation of the Alouk water station in Ras al-Ain after the Turkish state repeatedly cut off water. 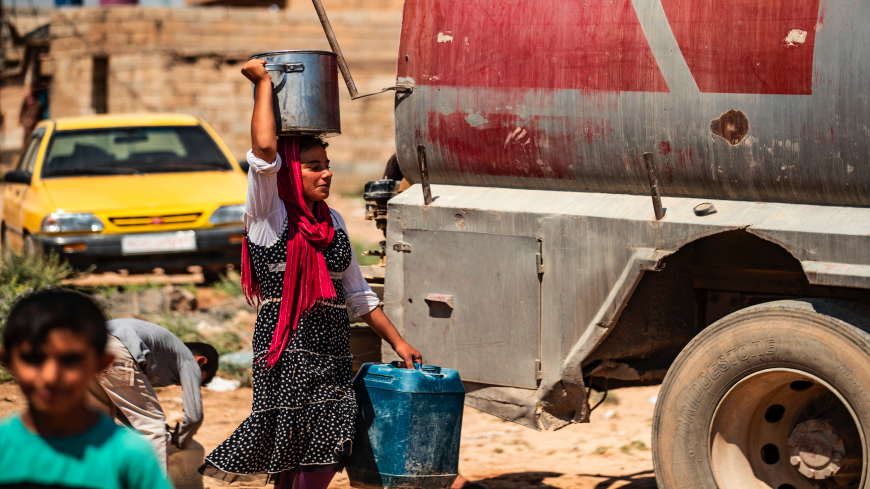 A Syrian girl carries a pot filled with water from cisterns provided by humanitarian organizations during a water outage in Syria's northeastern city of Hasakah on Aug. 22, 2020. - DELIL SOULEIMAN/AFP via Getty Images

Turkey and allied Syrian opposition factions led by the Free Syrian Army (FSA) have deliberately deprived of water more than 1 million civilians in Hasakah and its countryside, the towns of Tel Tamr, al-Hol and Abu Raseen, and the nearby villages and communities in an area that is already suffering from drought and water scarcity.

In early December, they cut off the water to the Alouk water station in the countryside of Ras al-Ain. This is the 17th time Turkey has deprived locals of water since taking control of Ras al-Ain and Tell Abyad in October 2019 during Operation Peace Spring against Kurdish fighters.

In light of the repeated suspension of pumping operations at the Alouk water station, the Kurdish-led Autonomous Administration of North and East Syria (known as Rojava) is seeking alternative solutions by planning the implementation of projects that supply water to citizens.

Joseph Lahdo, head of the Local Administration and Environment Committee in Hasakah, talked to Al-Monitor about the autonomous administration’s plan to implement a $5 million project to draw water from the Khabur River and store it in al-Himme artificial lake near Hasakah.

“The Khabur water drawing project will meet the city’s water needs, but it needs time to be completed,” Lahdo explained.

Khaled Hami, co-head of the Water Directorate affiliated with the autonomous administration in the predominantly Christian town of Tel Tamr, told Al-Monitor, “The autonomous administration has begun to solve the water crisis in the town by supplying it with drinking water from the wells of the village of Ain al-Abed, in the countryside of the town.”

“We are in the process of implementing two other projects that are underway to secure Tel Tamr's need for drinking water. The first project is digging water wells in the village of Gulbistan [east of Tel Tamr], and the second project is digging wells in the village of Salhia [east of Tel Tamr] and extracting water from the wells of the two villages to Tel Tamr,” Hami said.

Citizens in Hasakah get their water, often unclean, from water tanks. Hevrin Walat, a doctor who works at a hospital in Hasakah, told Al-Monitor about kidney and intestinal diseases that are spreading widely. “The citizens of Hasakah largely depend on bottling water from the water tanks that roam the neighborhoods. Some are provided by nongovernmental organizations and others by the United Nations. Merchants who own tanks sell water, and many families cannot afford water and are forced to extract unclean well waters, which has harmed their health and that of children,” she said.

She added, “The repercussions of water cutoffs, especially during the summer, are dire due to the coronavirus pandemic, as water is the first weapon to confront it, according to the guidelines of international health institutions, including the World Health Organization.”

Saeed al-Bash, an expert in international law who worked in investment companies, said that Turkey’s water cutoff to the Syrian population is a war crime. He told Al-Monitor, “Cutting off water to the city of Hasakah violates the basic principles of international law and treaties. Turkey is committing a major crime against Syrian civilians, and according to international laws, each crime directed against civilians is considered a war crime from the legal point of view. Cutting off water is a crime against humanity, and it is deliberately harming women, children and the elderly.”

Earlier this year, Human Rights Watch accused the Turkish government of deliberately harming civilians in Hasakah and its countryside by cutting off drinking water, which risks the further spread of the coronavirus.

In its report, HRW stated that the Ankara government has repeatedly cut off the pipeline that carries water to the cities in northeastern Syria and warned that residents in those areas face the risk of contracting the virus.