Critics say Turkey is taking superficial steps to serve religious minorities in the areas under its control in Syria for the sake of its image before the West. 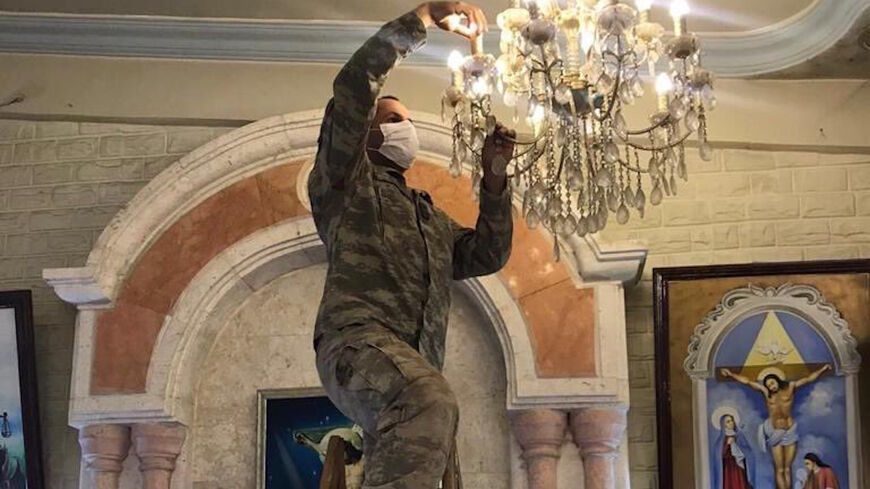 Turkish soldiers carry out maintenance work at the Syriac Orthodox Church of Mar Tuma in the center of Ras al-Ain, Syria, in a photo posted July 14, 2021. - Twitter/Turkish Ministry of Defense

The Turkish Ministry of Defense recently announced that its armed forces carried out maintenance work on the Syriac Orthodox Church of Mar Tuma (St. Thomas) in the center of Ras al-Ain in northern Syria.

The ministry added in the July 14 statement that the Turkish armed forces have paid great attention to the restoration and maintenance of religious buildings in the Operation Peace Spring area.

Abdullah Arin, the governor of Turkey’s southeastern city of Urfa, visited Ras al-Ain on June 11. Accompanied by the head of the Ras al-Ain local council, Mohammed Ali al-Hosho, Arin visited the Syriac Orthodox Church and met with Syriac Christians before heading to the city’s cultural center, where training and educational courses have been offered to locals since last year.

Hosho told Al-Monitor, “The maintenance and restoration works carried out by the local council with the support of the Turkish Ministry of Defense at the Church of Mar Tuma in Ras al-Ain have been completed. These works included repairing the internal electricity grid, the lighting system and the table for candle lighting. The church was provided with a generator, furniture, holy books and church supplies that were lost. We have also restored the damaged walls of the church. In the next stage, the walls will be repainted. All of these works were done upon the direct request of the Turkish government. And for the first time since the Syrian National Army [affiliated with the Turkish-backed Free Syrian Army] took control of the area as part of Operation Peace Spring, the Christians in the Syrian city of Ras al-Ain peacefully celebrated Christmas in the Syriac Orthodox Church.”

Ayman Abdel Nour, head of the nonprofit organization Syrian Christians for Peace, told Al-Monitor, “At the International Religious Freedom Summit held on July 13, 14 and 15, participants expressed wide discontent over issues related to religious freedom in Turkey. Members of the [Kurdish-led] Autonomous Administration in North and East Syria held meetings [with officials] on the sidelines of the conference to discuss Turkey’s expulsion of Christian and Yazidi minorities and destruction of churches in the area. The conference also focused on religious freedoms in northeastern Syria under the control of the Syrian Democratic Forces (SDF), and the restrictions imposed on these freedoms compared to the areas recently controlled by the Turkish-backed factions.”

Abdel Nour went on, “Since the issues to be discussed at the summit were clear before it even kicked off, Turkey seems to have worked to promote itself as a protector of minorities in order to embellish its image before the West. The Turkish-backed factions have been repeatedly accused of violations against Kurdish and Christian minorities.”

He said, “Turkey will not be able to change this image, which requires assiduous work, not just empty gestures. Religious freedoms are not limited to building and renovating churches, but rather require guaranteeing the rights and freedoms of those who have no religion and not only those who are non-Muslims. Turkey’s restoration and maintenance of churches will neither change its policy toward religion nor make it a state of freedom and democracy.”

Mikhail Yaacoub, a priest at Mar Assia al-Hakim Church in al-Darbasiyah, accused members of the armed opposition factions of breaking the locks of the Church of Mar Tuma and looting its contents.

Quoting sources from the city of Ras al-Ain, Yaacoub told the North Press Agency in November 2020 that the church's furniture and furnishings were heavily looted.

Youssef Kourieh, a Germany-based researcher specializing in Christian affairs, told Al-Monitor, “Turkey is trying to justify its presence in the area by portraying itself as a supporter of Christians. This plan is based on two main points: placing pressure on the Kurdish fighters, mainly the Kurdistan Workers Party (PKK), and sowing discord among the local community, including the Syriac Christians, Arabs and Kurds, be they loyalists or opponents. This policy has been followed for 30 years in southeastern Turkey and is now applied to the Turkish-controlled areas in Syria. Turkey is also portraying itself as a supporter of Christians in Turkey, as Erdogan opened a church in Istanbul a few years ago but in return seized the property of Christians in southeastern Turkey.”

He added, “Turkey used the SDF in the Operation Peace Spring area as a pressure card to control the properties of Christians," explaining that a monk in the Monastery of Mar Awgin near Hasakah was falsely accused of "receiving members of the PKK in the monastery" and sentenced to two years in prison while the monastery's properties were seized. He said, "More than 210 Christian families lived in Ras al-Ain before 2012. But after [Jabhat al-Nusra] took control of the city in 2013, most Christian families fled the city. Some of them returned after the SDF took control of Ras al-Ain, bringing the number of families there to about 40. However, these families fled again during the Turkish-led Operation Peace Spring in October 2019, with only 14 [Christian] individuals remaining in the city now.”