Clashes are raging between Turkish-backed Syrian rebels and Syrian Kurdish groups east of the Euphrates River in what Syrian Kurds claim that is a Turkish effort to prevent displaced civilians from returning to their homes. 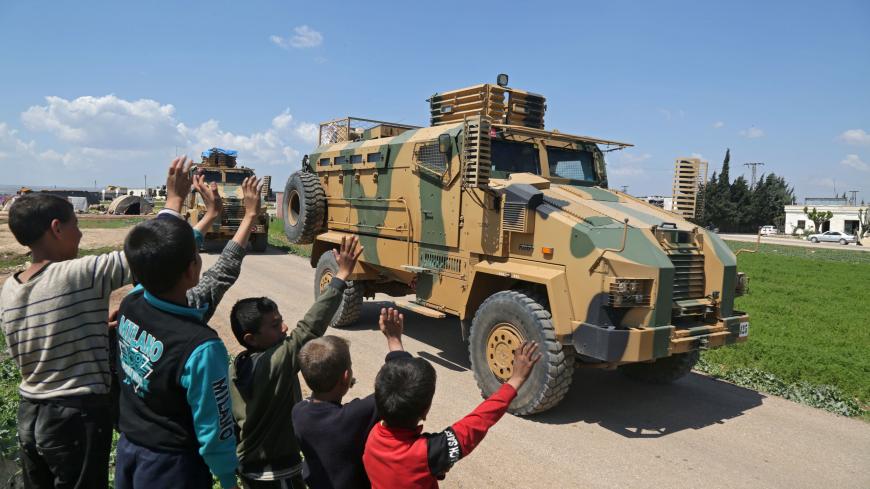 Syrian youths wave to a convoy of Turkish military reinforcements advancing near the town of Hazano in the countryside of Idlib province, Syria, Apr. 12, 2020. - AREF TAMMAWI/AFP via Getty Images

Despite the new challenges posed by the novel coronavirus outbreak, Turkey is pressing ahead with military deployments in Syria’s Idlib and maintaining its tight grip east of the Euphrates River.

Ankara has transferred a number of military vehicles and munitions to Idlib, bringing its number of military posts in the last rebel bastion to 53 as of April 8. Turkey’s increasing military activity in Idlib is no surprise, given possible looming operations in and around the enclave to reopen the M4 highway and to create a security corridor on both sides of the strategic road, as called for in a deal between Turkey and Russia. The deal, sealed in Moscow March 5, called for the cessation of hostilities, provided that the fight to eradicate terrorist groups continued. But there has been escalation on another front. Turkey-backed forces deployed east of the Euphrates to an area that came under the Turkish control in Operation Peace Spring are mounting attacks on the Kurdish-led Syrian Democratic Forces and the Syrian government troops.

The coronavirus outbreak has topped the agenda not only in the Kurdish-led Autonomous Administration of North and East Syria, but also in Turkish-controlled Tell Abyad and Ras al-Ain to the east of the Euphrates. The outbreak was expected to slow the fighting in the region. However, the attacks have not been disrupted by the pandemic, nor by internal disputes among Turkish-backed Syrian National Army factions. Syrian fighters discontent with Turkey's failure to pay them is also growing.

In March, as the pandemic sent the world into turmoil, clashes raged in the region, particularly around Tell Abyad, Ain Issa and Tell Tamer. April saw an uptick in violence.

Turkish-backed forces based in Ras al-Ain are shelling villages in the predominantly Christian town of Tell Tamer, which lies on the M4 highway some 23 miles (37 kilometers) from Ras al-Ain. Ain Issa and Tell Abyad are also under fire.

The frequency of the clashes points to a low-intensity conflict strategy.

The tension further escalated through the second half of March with the mainly Assyrian town of Tell Tamer coming under fire.

On April 1, the villages of Kafr Hamra and Umm al Kayf near Tell Tamer and Rabia near Ras al-Ain were bombed, wounding three civilian women.

On April 2, the villages of Umm al Kayf, Abosh, Qabr, Rubaiyat and Tal al-Ward near Tell Tamer came under fire. According to local sources, two Syrian soldiers were killed and two others wounded during the clashes in Abosh and Qabr.

The Turkish Defense Ministry stated that 10 People's Protection Units (YPG) fighters had been “neutralized” in an operation conducted by Turkish “commandos” in the Peace Spring region.

The YPG is seen as an affiliate of the Kurdistan Workers Party (PKK), the armed group that has been fighting Ankara since 1984. The PKK is listed as a terrorist group by Turkey and much of the international community.

“The terrorists were about to launch an attack aiming to disrupt the peace and stability in the region,” the statement read, giving no further details. In another statement on the same day, the ministry announced four more YPG fighters had been “neutralized.”

Attacks on the SDF positions in Tell Abyad and Tell Tamer kept up through the first week of April. In response, the influential Assyrian Military Council in Tell Tamer and the Habur Protection Units joined in the SDF’s counterattacks.

The Defense Ministry announced April 4 that 24 fighters had been “neutralized,” without providing any details about the time and locations of the operations. Naturally, the Kurdish sources have not confirmed these figures.

When Turkey launched Operation Peace Spring in October 2019 against the Syrian Kurdish-led groups, civilians escaping villages between Ain Issa and Tell Abyad took refuge in Raqqa while civilians escaping Tell Tamer scattered across Hasakah. Now that the operation is over, they are trying to return to their homes, but they are discouraged by the artillery fire and the recent clashes have allegedly led to new displacements from some villages.

“The region is being kept under fire to prevent civilians from returning to their villages. We were expecting the coronavirus outbreak to stop the clashes and bring some normality to the region, but the attacks are mounting,” an official from the Kurdish-led administration in northeast Syria told Al-Monitor. “These attacks are affecting some 15 villages and undermining the autonomous administration’s coronavirus [containment] efforts.”

The attacks have also led to speculation on whether President Recep Tayyip Erdogan is still betting on his so far botched attempts to seize control of a corridor stretching for the entire 566-mile (911-kilometer) Turkish-Syrian border and oil fields in SDF-controlled Deir ez-Zor. Turkey’s Operation Peace Spring in October had aimed to set up a safe zone along the war-torn country’s northern frontier to resettle some of the 3.6 million refugees Turkey hosts. However, the deals Turkey reached with the United States on Oct. 17 and Russia on Oct. 22 to cease the operation limited the Turkish-control territory to an area 20 miles (32 kilometers) deep between Tell Abyad and Ras al-Ain. The escalation is considered an effort to keep Turkey’s initial plans alive.

The Turkish Defense Ministry’s decision to scale down the troop movements also appears irrelevant in the Syrian arena.

Meanwhile, discontent and disarray seem to be growing among Turkish-backed Syrian National Army factions. Some 60 fighters held a protest in Tell Abyad April 5 demanding Turkey pay their overdue salaries and allow fighters to cross into the area west of the Euphrates. Similar demands were raised back on March 17, when armed militia staged a sit-in, blocking the road linking Tell Abyad and Ras al-Ain. They had also asked for a rotation of troops between forces deployed in the Euphrates Shield and Olive Branch regions as well as the Peace Spring area.

Turkey has taken some measures at the Tell Abyad and Ras al-Ain crossings to stop the virus from entering the region and people still fear becoming trapped in the Peace Spring area, which lacks proper health facilities.

Rifts between the various Syrian National Army factions are standing out as another example of the disarray. A quarrel over the houses and businesses that the militia sees as spoils of war escalated into an armed conflict in the town of Kharabat in Ras al-Ain on the night of April 5. Hours of clashes left eight militia members dead. Episodes of looting similar to what happened in the formerly Kurdish-held enclave of Afrin are now unfolding in the Peace Spring region.

Ankara’s efforts to keep the front lines active despite the deals it reached with Russia and the United States might be futile. The attacks on the SDF and Syrian government troops’ positions have not yielded any territorial gains. In addition to the armed factions’ discontent with Turkey, ongoing problems with the locals may be another harbinger of new trouble for Turkey.

New territorial gains, new financial resources, reconstruction opportunities and oil have been the main driving forces behind the armed militia’s eagerness to participate in Operation Peace Spring. Under the new circumstances, however, Erdogan may not be able to use similar leverage to entice these forces, given its budget crisis, international isolation and dependence on the Russian game plan. Thus, the unfinished drama in northeastern Syria appears to be a looming headache for Turkey.