Turkey established military posts and provided them with advanced weapons to prevent the advance of the Syrian Democratic Forces toward areas under Turkish control. 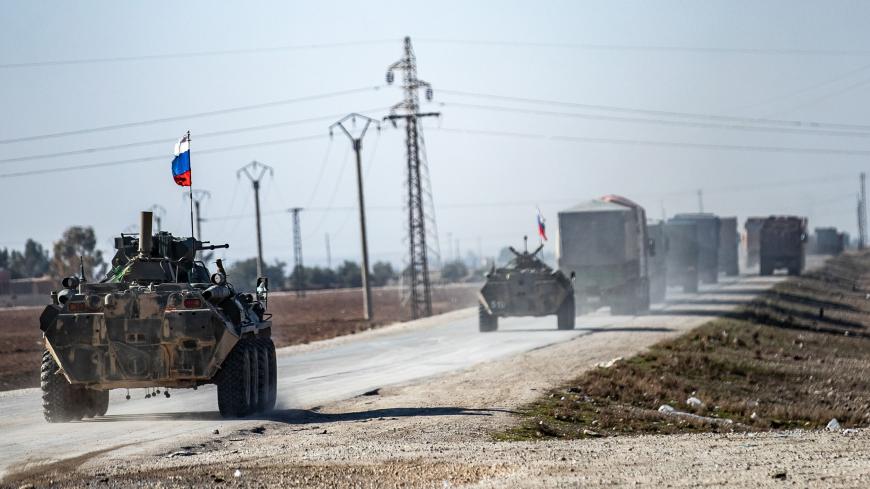 Russian troops escort a convoy of Syrian civilians leaving the town of Tal Tamr in Hasakah province as they return to their homes in the northern town of Ain Issa in Raqqa province via the M4 highway, on Jan. 10, 2021. The towns are on the front lines between the Syrian Democratic Forces (SDF) and Syrian opposition factions supported by Turkey. - DELIL SOULEIMAN/AFP via Getty Images

Turkey supplied the four bases with surveillance towers, radars, military vehicles and heavy weapons and built high earthen berms around them. The bases, located near the M4 international highway linking the cities of Hasakah and Aleppo, were also equipped with a Turkish-made IHTAR anti-drone system.

A source in the opposition Free Syrian Army (FSA) who works in one of these bases told Al-Monitor on condition of anonymity, “The four military bases were established in the wake of an agreement with the Russian forces to put an end to Operation Peace Spring and to prevent the advance of the SDF toward the areas under the control of the FSA-affiliated Syrian National Army and Turkish army.”

Operation Peace Spring was a Turkish offensive into northeast Syria launched in October 2019 against the SDF, which Ankara regards as a terrorist group. Turkey said the mission was aimed at “prevent[ing] the creation of a terror corridor” on its border, as well as to form a safe zone to return Syrian refugees to their homes. Syrian Kurds, meanwhile, deem it an invasion and accused Turkish and Turkish-backed forces of human rights violations.

The FSA source said the bases are aimed at stopping “repeated SDF violations and bombings of these areas.” He said Russian bases were established opposite the Turkish posts in al-Mushairefah, the Ain Issa camp and at the electricity company. “All of these posts are adjacent to the town of Ain Issa, and their ultimate objective is the resumption of joint Turkish-Russian patrols on the M4 international highway in the wake of the repeated targeting of Russian vehicles, to eventually allow travelers and commercial convoys to take that road again,” he said.

He said that in a Feb. 23 meeting, Turkish officers had informed Turkey-backed opposition commanders that a new observation post was going to be established about half a mile north of the M4 highway. The source said work had already begun on this post, and it was being surrounded with earthen mounds. “A Turkish convoy of six cars subsequently entered the Tell Abyad military crossing with heavy weapons, equipment, electronic equipment and radars. The equipment also included the IHTAR anti-drone system with the aim of preventing reconnaissance aircraft and drones from flying in the sky over the area. The radars were distributed to the four bases, which are about 3 kilometers [2 miles] apart from one another,” he added.

On March 12, the FSA source said, a special Turkish commando division arrived at the Turkish bases to assess the conditions of the military bases and their level of readiness to respond to attacks. He said the officers who visited had “attack plans in case the Turkish government decided to resume its battles against the SDF. Turkish officers who also came to the base will be responsible for managing the security file in the cities of Tell Abyad and Ras al-Ain and respond to the bombings targeting the region.”

Fayez al-Asmar, a defected Syrian regime soldier, strategic analyst and military expert who writes for a number of papers, considered it normal for Turkey to establish such bases to protect areas under its control in the region east of the Euphrates. “It is not only about the Turks, as everyone is seeking to consolidate the areas under their control and increase their influence in the region. It would actually be more accurate to say that they are control posts, not bases,” due to their size, he said.

Asmar said that in the past, “Such posts would only plan, manage and provide logistical support, in addition to monitoring and assessing needs. However, the military events on the ground have prompted Turkey to also add to the tasks entrusted to such posts the responsibility of dealing with attacks and countering them if necessary.”

“By establishing such posts and supplying them with advanced weapons, Turkey is seeking to convey a message whereby it won’t allow the SDF to go beyond the 30 kilometers [19 miles] that Turkey controls deep into the Syrian territories so that it protects its borders from the presence of these militias. Since drones are widely used by all militias on the Syrian ground, including the SDF, Turkey found it necessary to provide its posts around Ain Issa, which is under the control of the SDF, with the IHTAR system to prevent the use of drones against its forces deployed on the outskirts of the town,” he said.

Also, Russian forces and the Russian-backed Syrian government forces' 5th Legion recently received military reinforcements from the regime army’s 93rd Brigade. These reinforcements were brought in from the Tabqa military airport in Raqqa’s countryside to joint posts with SDF forces in the vicinity of Ain Issa.

It seems the Russians prefer to avoid the military option as far as controlling Ain Issa is concerned in order to maintain a friendly relationship with the SDF. Meanwhile, the SDF forces know full well that Russia does not welcome the expansion of Turkish influence and will subsequently not allow any military movement. Turkey, in turn, is attempting to prevent a Russian agreement with the SDF to preserve Ankara's interests in the region.

Hisham Eskif, head of the political bureau of the opposition Alsalam Brigade of the 3rd Legion of the Syrian National Army, told Al-Monitor, “Both Turkey and Russia are seeking to build a new military base to end the clashes between the Syrian National Army and the SDF. Turkey has established bases in every village neighboring Ain Issa, which means that the Turkish bases are only about 3 kilometers apart from one another. But this has not stopped the SDF from attacking the villages under the control of the Syrian National Army to try and seize them. This has pushed Turkey to establish additional military posts near [Ain Issa].”

“The fact that Ain Issa connects the provinces of Aleppo and Hasakah has prompted all parties to vie for control of it. Meanwhile, the recurrent meetings between Russia and Turkey have yet to reach a solution that satisfies both parties in reopening the M4 international highway, all the while stopping the fighting and stabilizing the region. Russia’s failure to implement the agreement with Turkey prompted the latter to take unilateral action to preserve its interests and those of its allies in preventing the regime forces and the SDF from advancing to the areas controlled by the Syrian National Army,” Eskif said.