Why is Syrian military deploying in Kurdish-held areas?

The Syrian government seeks to strengthen its military presence in Ain Issa and the area overlooking the M4 international highway, which are under control of the Kurdish-led Syrian Democratic Forces. 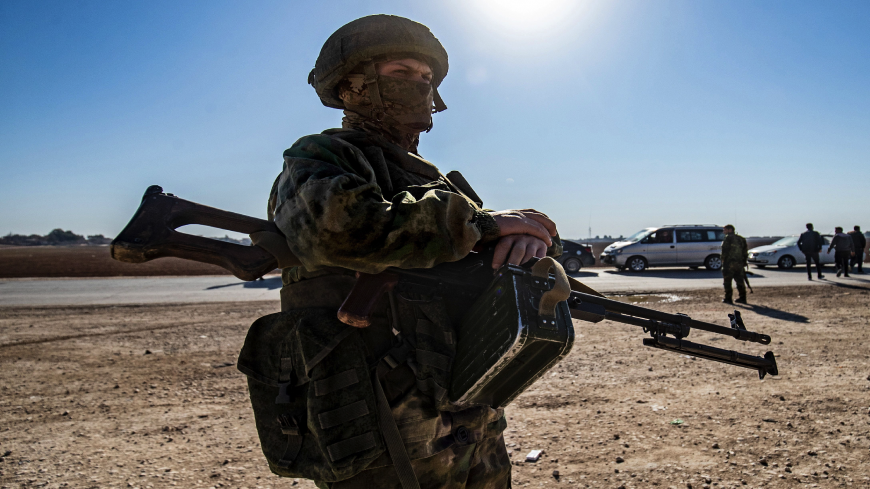 A Russian soldier stands guard as troops escort a convoy of Syrian civilians leaving the town of Tal Tamr in the northeastern Hasakah province, to return to their homes in the northern town of Ain Issa in the countryside of the Raqqa region, via the strategic M4 highway on Jan. 10, 2021. The town of Tal Tamr is on the front line between the Syrian Democratic Forces and the Syrian factions supported by Turkey. - DELIL SOULEIMAN/AFP via Getty Images

ALEPPO, Syria — The Syrian government, with the support of Russia, is trying to boost its military presence in the areas of northeastern Syria controlled by the Kurdish-led Syrian Democratic Forces (SDF), which can be considered a violation of the agreement signed by the regime with the SDF under the auspices of Russia in October 2019. The agreement provides for a specific deployment for the regime's army and without heavy weapons along the Syrian-Turkish border to prevent a Turkish offensive.

The regime allegedly violated the agreement by sending in early March a military convoy heavily armed with weapons toward Ain Issa and the outskirts of the M4 highway connecting the governorates of Hasakah and Aleppo, which heralds the return of arrests and escalation between the two sides.

Khaled al-Homsi, a journalist who works for the opposition-affiliated Orient website in the Tell Abyad area near Ain Issa in the northern Raqqa governorate, told Al-Monitor, “The regime’s military reinforcements began to reach the area adjacent to the M4 highway in the countryside of Raqqa and Hasakah governorate in northeastern Syria since the beginning of March. These reinforcements have so far included some heavy artillery bases, missile bases and troop carriers. The regime forces have also implemented a new redeployment operation, and the largest force is stationed in the villages of al-Maalak, al-Hoshan and al-Khalidiyah, which are adjacent to the M4 highway. The regime forces are also stationed in the Electricity Company in the vicinity of Ain Issa.”

A military official in the SDF stationed in Ain Issa told Al-Monitor on condition of anonymity, “The SDF leadership is not pleased with the Syrian regime bringing in military reinforcements with heavy weapons to the area even though these reinforcements are so far relatively modest. The regime cannot just change the balance of power on the ground. Some leaders in the regime forces said the reinforcements are to counter any attempt by the Free Syrian Army (FSA) and the Turkish army [to attack the area], but the SDF fears that the regime will continue its policy of strengthening its military presence in the area with Russia’s support.”

It seems that the Syrian military is trying to pressure the SDF and impose a new military reality in the Ain Issa area, as long as it has not achieved — with Russia's help — what it has been aiming for since the end of 2020, which is forcing the SDF to withdraw from Ain Issa and preventing the opposition factions and the Turkish army from taking control. The regime strengthening its military presence near the M4 highway prevents a military operation by the opposition and the Turkish army in order to expand and control the area. The efforts of the Syrian regime reflect its interest in the vital and strategic roads that it cannot afford to lose in light of the stifling economic crisis.

Col. Mostafa Bakkour, a defected Syrian regime officer, military analyst and researcher living in Idlib, told Al-Monitor, “The SDF will not respond to the pressure of the Syrian regime and will not allow it to expand and boost its military presence in its areas of control. If the regime continues to send reinforcements and heavy military equipment, tension will erupt between the two sides in the area. As a result, Russia would intervene as a mediator, despite its public support for the regime. Russia is pursuing a policy of mediation, or at least so it claims, to preserve its interests and at the same time exploit any action and disagreement between the conflicting parties.”

Ali Tami, spokesman for the Kurdish Future Movement in Syria, told Al-Monitor, “The regime’s military moves in the Ain Issa area and near the M4 international highway aim to further pressure the SDF to resume oil exports to the Syrian regime, which is trying to boost its military presence in the area in order to prevent oil exports from the SDF to the Syrian opposition areas in the countryside of Aleppo and Idlib. The regime and Russia do not want the oil to flow to the opposition areas.”

On March 5, Russia struck the Hamran crossing linking the SDF with the opposition near al-Bab and the rudimentary oil refining stations in the countryside of Aleppo. The attack may also point to the regime’s plan to pressure the SDF to stop exporting oil to the opposition and resume exporting to the regime-held areas.

On March 7, the SDF resumed the supply of oil to the regime-controlled areas after a monthlong hiatus, which caused a fuel crisis in the regime-held areas.

Firas Faham, an Istanbul-based researcher at the Jusoor Center for Studies, told Al-Monitor, “The regime’s attempt to reinforce its military presence near the M4 highway comes in the context of pressuring the SDF to withdraw from Ain Issa. There seems to be a Turkish-Russian understanding; either Russia expels the SDF from Ain Issa, or Turkey launches a military operation.”

Faham added, “Yet it seems that Russia is trying to avoid a Turkish military operation because it does not welcome Turkey’s growing influence, especially since the Turkish army and the FSA making their way into more areas would pave the way to connect the Peace Spring area with the Euphrates Shield area in the countryside of Aleppo. This is why pressure is being exerted on the SDF to withdraw or at least reduce its military presence in Ain Issa, which will lead to the return of the regime's institutions to the area.”

It seems that the SDF understands Russia’s intentions in northeastern Syria, and the Russians prefer to avoid the military option to keep channels of communication open with the Kurds and not allow the United States to use this against them and turn the Kurds into enemies. The SDF is also well aware that Russia does not welcome the expansion of Turkish influence and will thus not allow for any military operation. At this point, the SDF will show resistance to the regime's demands regarding its control of Ain Issa.