Turkey has mobilized more forces in the vicinity of the town of Ain Issa in northern Syria, while the Free Syrian Army, an ally of Ankara, intensified its presence in that area amid an agreement between the US-backed Syrian Democratic Forces and Russia to ward off Turkey and its allies from the town. 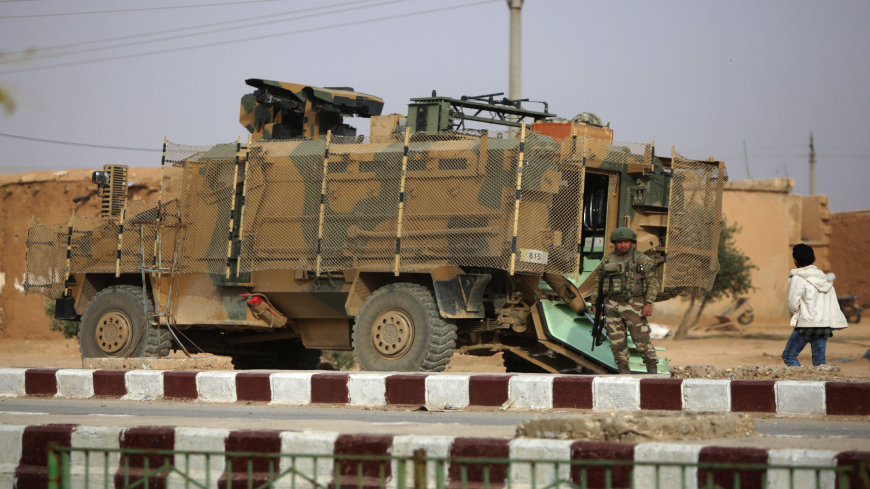 A Turkish soldier stands near his armored vehicle on a highway near the northern Syrian town of Ain Issa in the countryside of the Raqqa region, on Nov. 26, 2019, as Turkey-backed forces deploy reinforcements around the key town. - BAKR ALKASEM/AFP via Getty Images

IDLIB — The city of Ain Issa in Raqqa’s northern countryside, controlled by the US-backed Syrian Democratic Forces (SDF), is still reeling under daily shelling by the Turkish army's artillery and the Free Syrian Army (FSA).

In a Dec. 10 report, the Syrian Observatory for Human Rights said the bombings carried out by Turkey and the FSA forces displaced within a month about 7,000 civilians who feared a looming Turkish military operation.

In another Dec. 18 report, the war monitor said the SDF brought military reinforcements to Ain Issa district, a day after Turkey and its allies deployed reinforcements consisting of tanks, artillery, troop vehicles and four-wheel-drive vehicles equipped with heavy machine guns to the villages of Abu Kharza, Sallum and Rummana, opposite the villages of Hoshan and Khalidiya, adjacent to the M4 highway that links Aleppo to Hasakah.

On Dec. 19, the operations room of the 1st Corps of the FSA announced the start of the battle to liberate the city of Ain Issa. The announcement came one day after the FSA, backed by Turkish artillery, launched an attack in Ain Issa that ended with the FSA-affiliated Ahrar al-Sharqiya armed faction seizing several villages near the city.

Turkish President Recep Tayyip Erdogan had vowed to continue military operations in Syria until Turkey gets what it had been promised. “The terrorist zones that still exist in Syria must either be cleared as promised, or we will come and do it ourselves,” Erdogan said in an Oct. 3 speech.

Ain Issa is strategically important, as it constitutes a key transportation node linking the provinces of Aleppo and Hasakah via the M4 highway that passes through it.

In a parallel development, the SDF reached on Dec. 10 an agreement with Russia and the Syrian regime to deploy joint observation points in the town of Ain Issa to monitor a cease-fire reached with Turkey, the United States and Russia in northern Syria in October 2019. The agreement provided for the establishment of three joint observation points in Ain Issa: one to the west, another to the east, and a third on the international Raqqa-Aleppo road, north of the town.

In this context, Al-Monitor met with the leader of the FSA-affiliated al-Mu'tasim Brigade, Al-Farouq Abu Bakr, who resides in the northern countryside of Aleppo. “The entry of the FSA into Ain Issa and the other cities and towns controlled by the SDF is only a matter of time. The cross-border separatist terrorist organizations (in reference to the Kurdish-controlled SDF) cannot be allowed to keep their control over Syrian cities and towns. We cannot remain silent for long about the forced displacement by SDF militia of the local residents including Arabs, Turkmen and national Kurds.”

Abu Bakr said that Ain Issa is not only a strategic geographical location, but it also has moral strategic importance for the SDF. During the previous period, the town has been the SDF’s main headquarters for holding meetings and conferences.

He added, “Talk about a Turkish-Russian swap of Ain Issa with Idlib is unrealistic and illogical. The SDF media are behind these rumors aimed to stir a rift in the Syrian-Turkish relations. We trust the Turks with whom we stand in the same trench in the war on terrorism. They have earned our trust in previous battles such as operations Euphrates Shield, Olive Branch and Peace Spring. Our next goal, after taking control of Ain Issa, is Manbij, which is a target for the FSA. We believe the Syrian regime is a key operator of the Kurdistan Workers Party (PKK), but they now seem to have conflicting interests. The regime’s interference will not change anything at the strategic level.”

Abu Bakr believes that Ain Issa is a Syrian land occupied by a non-Syrian terrorist organization. “Those who oppose the idea of recapturing Ain Issa with the support of the Turks want the areas controlled by the revolution (opposition) forces to remain confined to a small patch of land. They definitely do not want the return of those forcibly displaced by the SDF to their homes and want to maintain the militia’s occupation of these areas.”

Ahmed Hassan, a Syrian journalist and researcher specializing in Turkish affairs, told Al-Monitor, “There is no Turkish decision yet to launch a military operation in the town of Ain Issa. For now, Turkey is threatening to wave such an operation to pressure Russia into forcing the SDF to surrender Ain Issa. Meanwhile, the United States seems to be working on a political approach between the SDF and Turkey in order to prevent a military operation. Three scenarios are available. In the first one, Turkey would push the FSA to exert military pressure on the SDF, whether by blocking the Aleppo-Raqqa international road or laying a siege on Ain Issa. The second scenario entails handing over Ain Issa to the regime and Russia, which is rejected by the SDF and the United States. This is why the United States seems to be pushing for negotiations between Turkey and the SDF to resolve all disputes. The third scenario would be a Turkish operation on Ain Issa and the remaining border area toward Iraq. In this case, Ankara would face US sanctions.”

Turkey's objective behind this escalation is to weaken the SDF and pressure it to disengage with the PKK. “Turkey also wants to divide the areas under the SDF control over stages,” Hassan said. “Currently the goal is to pressure the SDF to change its project aligned with the PKK that Ankara classifies as a terrorist organization.”

Hassan believes the available political bargaining between Russia and Turkey aims to improve Turkey's position in Idlib where Russia has the upper hand, in exchange for Turkey improving Russia's position in the east of the Euphrates in order to threaten US interests in eastern Syria. So far, there is no clear formula for this bargaining deal in light of the US role in the east of the Euphrates and the Iranian role in Idlib, he added.