An anticipated military operation by the regime and its allies in the city of al-Bab has stirred controversy among the opposition ranks. 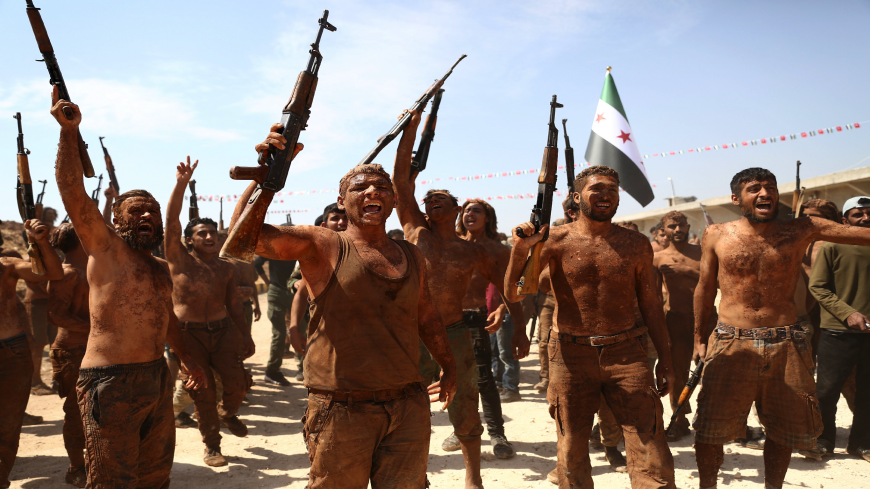 Syrian Turkish-backed fighters from al-Mutasim Brigade take part in a training at a camp near the town of Marea in Syria's northern Aleppo district, on September 12, 2019.

ALEPPO, Syria — News spread recently among popular and military quarters in the city of al-Bab in the northeastern countryside of Aleppo about the Syrian regime and its Russian-backed allies launching a military attack in the area, stirring anxiety and controversy among residents of the city, which is controlled by the Turkish-backed armed opposition.

The regime has been mobilizing reinforcements in the areas near al-Bab since the beginning of January amid concerns among locals that they may be part of the military buildup that portends a future military operation aimed at controlling the strategic city of al-Bab.

Recent statements by Mustafa Sejari, director of the political bureau of the Mutasim Brigade, a Free Syrian Army (FSA) faction, further inflamed the concerns of al-Bab residents in a tweet on Jan. 2 when he said, “We warn the international community and the Group of Friends of the Syrian People of possible Russian aggression against the Syrian city of al-Bab. We call on political forces and opposition institutions to take action to bring in military support for the [FSA].”

He added, “The [Bashar] al-Assad regime and its allies do not believe in the political solution and are preparing for military action and a new aggression.”

The anticipated aggression over the city sparked debate among opposition ranks. Some warned of the dangers and repercussions of such military operations. Other FSA leaders refuted the likelihood of such aggression while underestimating the seriousness of the threats. In an attempt to allay the fears of the city’s residents, they further denied the possibility of any military action planned by the regime and its allies against al-Bab.

The spokesman for the Turkish-backed FSA, Maj. Yusuf Hamoud, told Al-Monitor, “We have not monitored any real military indications of an imminent battle that the Syrian regime might launch in the city of al-Bab, nor are there any new enemy troops mobilized on these fronts. The news circulating about the withdrawal of some factions from some deployment points on this front is not correct. The factions are in constant readiness for all possibilities, especially since our backstabbing enemy does not honor any pledge or agreement.”

Al-Monitor also met with Sejari. “The warnings we issued regarding the [expected] military operation by the regime and its allies on the city of al-Bab aim to draw the attention of the international community and political opposition institutions so that they assume their duties. They must exert efforts to protect the residents of this city and prevent the enemy from implementing its plans.”

He warned that hiding information and news about the regime and Russia's plans regarding the city of al-Bab will be disastrous. “The failure to take any action and insisting on denying these threats under the pretext of reassuring the city's residents will not help.”

Sejari argued that al-Bab, from the Russian perspective, is outside the scope of any agreement with Turkey and is rather among the list of potential Russian military targets. “The city, which has strategic importance, is also a major target for terrorist groups. At the domestic level, it is still subject to conflict between [opposition] factions’ forces, which caused a lack of centralized security and continuing chaos.”

Al-Bab, the largest city in the Euphrates Shield region, is witnessing ongoing security chaos, with occasional assassinations and bombings. Large numbers of refugees and displaced persons from different Syrian regions had flocked to the city following Operation Euphrates Shield launched by the Turkish army against the Islamic State in August 2016 and after the Syrian opposition captured it in 2017.

The deputy head of the political bureau of the FSA-affiliated Al-Salam Brigade, Hisham Eskif, told Al-Monitor that threats to the city of al-Bab must be addressed seriously. He called for a military alert to counter and prevent any sudden movement by the regime.

“The fact that the city of al-Bab is located on the M4 highway is one of the most important reasons why the regime and its allies are interested in it,” Eskif said. “Controlling it is part of the plan that Russia intends to implement, which is to control the main roads in Syria and keep the opposition away from them.”

The M4 international road extends from Hasakah in northeastern Syria through Ain Issa in the north of Raqqa and Manbij in the northeast of Aleppo, all the way to the city of al-Bab until it reaches Aleppo and the city of Latakia on the Mediterranean coast.

The city thus holds strategic importance for Russia and the regime, just like other cities on the same road. They had made several attempts to seize Jericho and Jisr al-Shughour, south of Idlib, and Ain Issa, north of Raqqa, and to oust the Kurdish-led Syrian Democratic Forces from Ain Issa under the pretext of preventing the opposition and the Turkish army from controlling them.

Al-Farouk Abu Bakr, a military commander in the FSA-affiliated Mutasim Brigade, told Al-Monitor, “Russia sees the city of al-Bab as an area outside the scope of its understandings and agreements concluded with Turkey. Thus, a military operation aimed to control it if necessary is not unlikely. I believe that the alleged threat should be taken seriously, not denied.”

In this context, Al-Monitor met Mohamad Bukaie, a lecturer in political sciences at opposition universities in the countryside of Aleppo. “I do not think the regime and its allies will launch any military operation against al-Bab at the present time. The city has a symbolic meaning for Turkey and is deemed one of the most important and largest cities in the Euphrates Shield area. Turkey has been providing the city with services and repairing schools. It will not easily abandon it.”

For his part, Mohammed Adeeb, a researcher in Islamic groups based in the northern countryside of Aleppo, told Al-Monitor, “The regime and Russia lack their typical excuses this time to launch a military operation against al-Bab, even if it is important to them as the city is not governed by militant organizations. It is controlled by moderate factions and is subject to Turkish administration. Therefore, the possibility of launching a military operation is unlikely, at least for the time being.”