Is Turkey gearing up for military move against Syrian Kurds?

A marked increase in Turkish military activity in the area between Ain Issa and Tall Tamer in northern Syria has raised the specter of a fresh Turkish military move to curb the Kurds before Trump leaves the White House. 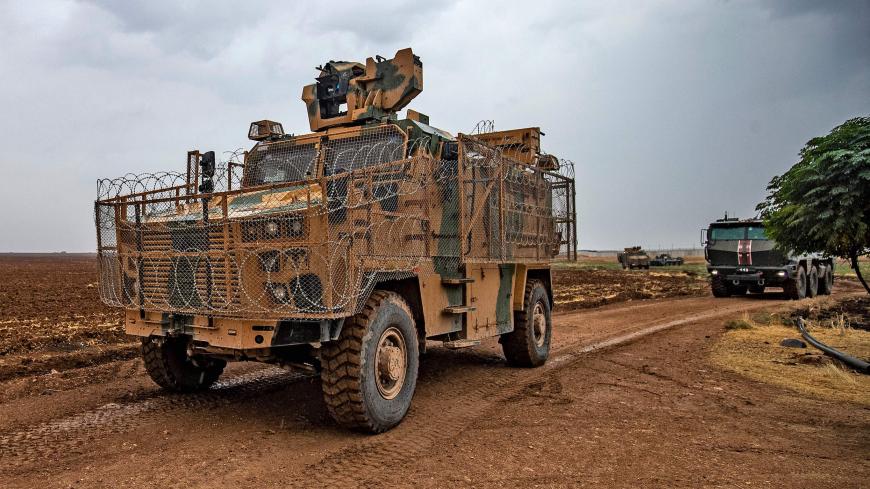 A picture shows a joint Turkish-Russian military patrol in the countryside of the Syrian town of Darbasiyah near the Turkish border in the northeastern province of Hasakah, on Nov. 5, 2020. - DELIL SOULEIMAN/AFP via Getty Images

A fresh Turkish military buildup is underway in the northern Syrian region of Ain Issa, north of Raqqa, around the key M-4 highway, raising the specter of another Turkish thrust to curb the Syrian Kurds.

Military vehicles, heavy weaponry, radars and remote surveillance equipment have been stationed in areas that form the line of contact with the Kurdish-led Syrian Democratic Forces (SDF). According to Kurdish sources, the Turkish military and allied rebel groups have set up military posts at the village of Saida, north of Ain Issa, as well as around Tell Tamer and Zirkan. In early November, the Syrian Observatory for Human Rights reported that Turkish forces had been stationed also at Kaffifa, Ain Rummana, Tina and Al-Rabea, all near the M-4 highway.

Mervan Rojava, the head of the media office of the Kurdish People’s Protection Units (YPG), the backbone of the SDF, told Al-Monitor that Turkish forces had set up a watchtower with surveillance cameras and snipers at Saida, a deserted village just north of M4. Rojava recalled that the M4 had effectively become a separation line between Turkish forces and the SDF after Turkey seized control of the border stretch from Tell Abyad to Ras al-Ain in Operation Peace Spring in October 2019. “The Turkish military has been setting up military bases and digging trenches along the separation strip at sites just several hundred meters from the highway,” he said.

After Operation Peace Spring, the grain silos in the village of Shergirak near Ain Issa became the largest Turkish base in the vicinity of M4. Another camp area is located near the village of Misherfa, not far from Tell Tamer. Turkey has been reinforcing both bases as well as new sites, according to Syria-based Kurdish journalist Nazim Dastan. Trenches, canals and tunnels are reportedly being dug near Medrut, not far from Tell Abyad, Zirkan and the Hoshan and Khalidiya villages along the M4.

Referring to Saida, which has been a sort of a buffer zone between the two sides, Dastan said, “Turkish officials met with the Russians a while ago, asking to set up a military base at Saida. The response of the Russians was negative. This was followed by an intensive assault, which the SDF repelled. Then they began to dig trenches and tunnels and erect a watchtower. They are now using the site to monitor the M4 and Ain Issa.”

According to Rojava, Turkey has simultaneously stepped up shelling of villages around Ain Issa and Tell Abyad. The vicinity of Shergirak has become a “true nightmare” for locals, he said, adding that civilian convoys were coming under attack on the M4, even though they are supposed to be under Russian protection under Turkish-Russian accords. He said “the road has become synonymous with looting, abductions and intimidation” by rebel militias aligned with Turkey.

Is the Turkish military activity in the area a prelude to a new phase in Operation Peace Spring?

President Recep Tayyip Erdogan raised the prospect of a fresh operation several times in October as the United States was busy with presidential elections. For Ankara, the US partnership with the YPG amounts to support for the Kurdistan Workers Party (PKK), the armed group that has fought Ankara for nearly four decades. Turkey sees the YPG as an extension of the PKK and considers both terrorist groups. “There are still terrorist areas in Syria. Either they are cleansed as we have been promised or we’ll go and do it ourselves,” Erdogan warned Oct. 3. In another warning Oct. 24, he said, “Efforts are underway to establish a terrorist state there. Turkey will never allow the creation of such a state along its borders. We’ll do what it takes to drain the terrorist swamp.” Four days later, he asserted that Turkey had “a legitimate reason to intervene at any moment” if “all terrorists are not removed … as we have been promised.”

Turkey appeared to mull an attempt to make further gains on the ground while President Donald Trump, whose abrupt decisions have often given Erdogan opportunities to act, was preoccupied with the election. Trump’s defeat seems to have somewhat altered Ankara’s calculus. Erdogan’s warnings have ceased since Joe Biden's victory was assured, but Turkey’s military activity on the ground has accelerated.

The prospect of Turkey taking advantage of the transition hubbub in Washington to expand Operation Peace Spring cannot be ruled out yet, despite signs of adjustment to the new reality in Washington. Ankara’s avowed enmity to the de facto Kurdish self-rule in northern Syria remains unchanged. Since scrapping the settlement process with the Kurds at home in 2015, Erdogan has invested great political capital in this policy, including his alliance with Turkey’s nationalists, which helped him install the executive presidency system in 2018.

Though Erdogan’s narrative about crushing the “terrorist corridor” in Syria might continue as long as he relies on nationalist support, Biden's impact is widely expected to force moderation in Ankara. The Kurds, in particular, expect an easing of tensions with Turkey. “While we cannot say that the chances of Turkey mounting a new military attack against [Kurdish-held areas] are zero, we can say that they have been significantly reduced,” SDF commander Mazlum Kobane told Al-Monitor earlier this month.

Still, the Kurds remain wary. Asked about the prospect of a fresh Turkish offensive, Rojava said, “They are watching for an opportunity to attack northern Syria, even though they know the political climate after the US elections is not in their favor. US and Russian forces, who are the guarantors of the deals [with Turkey], are keeping up their communication with the SDF, but are not preventing Turkey’s acts of occupation. Turkey might try to pursue its agenda [while] its old ally Trump [remains in office], but I don’t think they’ll have the means and guts to do that because the implications could be disastrous.”

Likewise, Dastan believes Turkey has a large-scale offensive in mind even though the political climate has changed to its detriment. “The offensive might not happen immediately, but they are laying the ground for it. They might make a move as soon as an opportunity emerges,” he said.

Russia’s attitude might complicate Turkey’s calculations. Under the Sochi Accord of October 2019, Turkey and Russia have been conducting joint patrols along the eastern and western boundaries of the Operation Peace Spring area, including the periphery of Kobani. Though the arrangement has not stopped Turkey’s attacks, it allows Russia partial control on the ground. Moreover, some significant changes have occurred on the ground since the signing of the accord. The Russians have taken over the base that US forces evacuated in Ain Issa and the Syrian military is now present both on the M4 and at the Turkish border.

Ultimately, the aim of Turkey’s reinforcements could remain limited to increasing its control over the M4. In a report earlier this month, Turkey’s state-run Anadolu news agency highlighted the role of the M4 as a route of oil supplies from Kurdish-held areas to territories controlled by Damascus. “While under US sanctions, the [Syrian] regime continues to obtain oil from the YPG/PKK terrorist organization, the United States’ partner. The oil trade … has totaled 15,000 trucks over the past month. Tankers carrying oil from YPG/PKK-occupied Rmelan have been spotted in [at least] three locations occupied by the organization, including Tell Tamer, Ain Issa and Raqqa,” the report said. Disrupting the oil flow requires control over the M4 and several junctions on the route.