The Turkish president, after backing Azerbaijan in Nagorno-Karabagh, could feel emboldened to move in Syria, but anticipating the next administration may give pause. 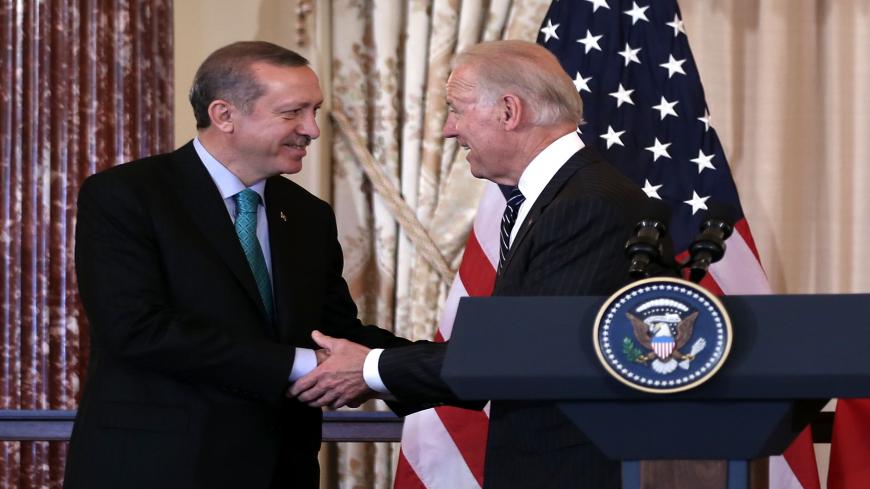 A readout from a Turkish National Security Council meeting Nov. 25 chaired by Turkish President Recep Tayyip Erdogan expressed "pleasure over the brotherly Azerbaijan taking back its own lands which had been under occupation for more than a quarter-century."

That sense of a historic win in Nagorno-Karabagh could spill over into Turkish military planning in Syria. Erdogan has enjoyed wide latitude because of his close ties to US President Donald Trump, as we reported here, but that could change with the inauguration of US President-elect Joe Biden in January 2021.

Will that speed up Turkey’s timeline for action?

Erdogan made clear again at the Nov. 25 meeting that "a terror corridor would by no means be allowed along Turkey’s southern borders," referring to the Syrian Kurdish People’s Protection Units (YPG), which form the core of the Syrian Democratic Forces (SDF), the key US partner in battling the Islamic State. Erdogan views the YPG as an extension of the Kurdistan Workers Party (PKK), which the United States and Turkey have labeled a terrorist group.

Speaking to parliamentary members of his ruling Justice and Development Party (AKP), Erdogan denied there was a Kurdish problem at all in Turkey, saying, "What Kurdish problem? We solved it."

"Erdogan defended his government’s record in the mainly Kurdish southeast, boasting of the roads and infrastructure that it had built and of its campaign against the PKK," writes Amberin Zaman.

"[He] justified the forced ejection of dozens of democratically elected Kurdish mayors on thinly supported charges that they were acting in concert with the PKK," Zaman continues. “We came to bring peace, and where there is terror, wherever there is a terrorist, we are here to crush their heads."

"A fresh Turkish military buildup is underway in the northern Syrian region of Ain Issa, north of Raqqa, around the key M4 highway, raising the specter of another Turkish thrust to curb the Syrian Kurds," reports Fehim Tastekin.

Erdogan may seek to avoid an all-out attack and focus instead on cutting off a vital economic lifeline for the Syrian Kurds.

Ultimately, the aim of Turkey’s reinforcements could remain limited to increasing its control over the M4 highway to choke off oil sold via tanker by the SDF to the Syrian government. "Disrupting the oil flow requires control over the M4 and several junctions on the route," writes Tastekin.

"Trump’s defeat seems to have somewhat altered Ankara’s calculus" about an abrupt move into Syria, Tastekin adds, but "the prospect of Turkey taking advantage of the transition hubbub in Washington to expand Operation Peace Spring cannot be ruled out yet, despite signs of adjustment to the new reality in Washington."

Antony Blinken, nominated by Biden to be his secretary of state, has been critical of Trump's policy in the region. He called a move last year to pull troops from northeast Syria as one that "gutted American credibility," reports Elizabeth Hagedorn. "During a May interview with CBS, Blinken advocated for keeping US boots on the ground in Syria and expressed regret over the Obama administration’s actions — or lack thereof — in the nearly decadelong conflict that saw the former president draw a ‘red line’ on chemical weapons use that he never enforced.”

The Biden administration "is bound to profoundly alter the current nature of Turkish-US ties," writes Metin Gurcan, "which have been largely reduced to a peculiar relationship" between Trump and Erdogan, "both of whom have had an overly personalized approach to foreign policy."

"The Biden administration will inherit a raft of major disagreements with Turkey," adds Gurcan, including NATO member Turkey’s purchase of the Russian S-400 missile defense system, disputes in the eastern Mediterranean, US investigation into Turkish Halkbank, and more.

“Even if he tries to moderate ties," adds Gurcan, “Erdogan seems to no longer have a team capable of placing bilateral ties on a healthy track. Ankara’s institutional capacity has eroded so much that meaningful and durable fence-mending might be now beyond its depth."

Dealing with Biden may be giving Erdogan pause to reflect on some of his more confrontational positions with the United States and the West, writes Semih Idiz.

"The situation is different this time; Turkey has its back to the wall, which leaves little room for Erdogan to act true to character," Idiz explains. "He appears to be aware that the circle is closing in with dire consequences for Turkey’s already devastated economy, and for his administration."

And then there is Russian President Vladmir Putin. "Moscow is likely to turn up pressure on Ankara in Syria, Libya, the Black Sea, the Karabakh conflict and energy issues in response to Turkish efforts to move closer to Washington," writes Gurcan. "All in all, Ankara seems to be bracing for a tough balancing act between Moscow and Washington next year."

No more nostalgia for 'model partnership'

“Turkey is an important country," said former White House Middle East coordinator Philip Gordon on this week’s "On the Middle East" podcast, but "the nostalgic aspiration for a model partnership and common values is probably out of reach for the moment, but it is still in our interest to prevent that deterioration from getting out of hand … and finding areas where we can work together."