Erdogan vows to crush US allies in Syria

The Turkish president weighs military options to defeat what he calls a “terror outfit” in Syria. 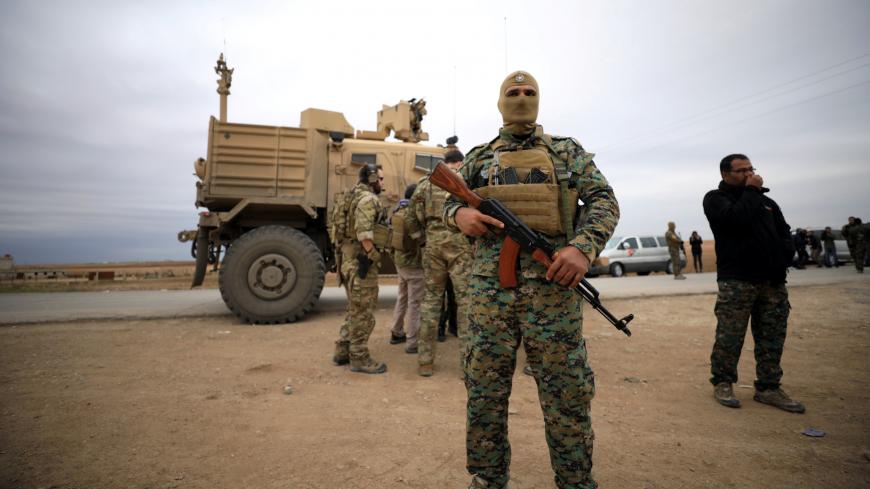 Syrian Democratic Forces and US troops are seen during a patrol near the Turkish border in Hasakah, Syria, Nov. 4, 2018. - REUTERS/Rodi Said

“Turkey may have secured a higher profile for itself in Syria recently, especially after working out a cease-fire for Idlib with Russia and Erdogan’s hosting of an international Syria conference attended by the leaders of Russia, France and Germany,” writes Semih Idiz. “Nevertheless, Ankara still has to come up with a response to the US position on northern Syria.”

“The United States persisted with its seemingly conflicting policy of conducting patrols with Turkish troops in Manbij west of the Euphrates while cooperating with the PKK-affiliated YPG to the east,” adds Fehim Tastekin. PKK stands for the Kurdistan Workers Party Turkish rebel group; the YPG is the Syrian Kurdish People's Protection Units.

“The Turks are concerned that the United States is digging in for the long haul in Syria to secure a region for the Kurds from where it can maintain its military foothold with a view to containing Iran,” reports Idiz. “Expectations were high that the planned meeting between [Turkish President Recep Tayyip] Erdogan and [US] President Donald Trump in Paris over the weekend would help to iron out remaining issues. The differences over northern Syria, however, remain very much in place and may have become more intractable after [US Syria envoy James] Jeffrey effectively gave notice to Turkey that it will have to come to terms with the US-YPG/PYD alliance.” The PYD is the Syrian Kurdish Democratic Union Party.

Turkish President Recep Tayyip Erdogan has vowed to “crush the terror outfit,” referring to the US-backed YPG, east of the Euphrates in Syria, propelling Ankara further along on a collision course with Washington.

Turkish artillery attacks Oct. 26 on Tell Abyad, Kobani and Zor Mughar reportedly killed 16 PKK-affiliated YPG fighters, and appeared to get Washington’s attention. The US offer of a $12 million bounty for PKK leaders Murat Karayilan, Cemil Bayik and Duran Kalka was welcomed by Turkey, but did not address the increasingly irreconcilable differences between Washington and Ankara.

“Although the bounty might have put the brakes on Turkey’s operation plans against Tell Abyad and Ras al-Ain, the reality remains that Ankara wants to expand its operations east of the Euphrates against Kurdish enclaves in northern Syria,” writes Tastekin. “According to Cevdet Yilmaz, vice chairman of the ruling Justice and Development Party (AKP), ‘Turkey will intervene when it decides the time is right.’”

“Ever since the Turkish army and its allied militias took control of Afrin in March, Erdogan has been working on a plan to do the same east of the Euphrates,” continues Tastekin. “The primary deterrent has been the United States flying its flag along the border region, as it did previously, preventing a Turkish attack against Manbij. … Despite Washington’s efforts to balance between Turkey and the Syrian Kurds, Ankara will not leave the YPG to hold territory along the Euphrates and in the border areas. In addition to deploying artillery fire and drone operations, Ankara is also likely to mobilize its allied opposition forces. On Nov. 3, the Syrian Human Rights Observatory reported that Turkey had dispatched some 1,200 FSA rebels from the outskirts of Aleppo to the border area.” The FSA is the Free Syrian Army.

“Any possible [Turkish] operation is expected to begin with Tell Abyad and Ras al-Ain and stretch all the way east to the banks of the Tigris,” reports Tastekin. “According to this plan, if successful, the 566-mile border between Turkey and Syria will be controlled by the Turkish army, including Qamishli and excluding only Tell Rifaat on the Kilis-Aleppo Road, where potential joint action with Russia could terminate the YPG presence.

“The main reason Turkey is prioritizing Tell Abyad and Ras al-Ain is that in these ethnically mixed regions, the Kurds do not necessarily constitute the majority. In July 2012, while the Kurds were imposing control over the area, Turkey’s proxy militias from the Free Syrian Army had crossed from Turkey into Tell Abyad and Ras al-Ain. While the YPG repulsed the forces entering Ras al-Ain, IS [the Islamic State] seized Tell Abyad, over which Turkey seemed unconcerned,” adds Tastekin.

“Turkey will likely try to increase the pressure east of the Euphrates to squeeze more concessions from Washington on Manbij,” continues Tastekin. “Right now, Turkey’s main goal is to replace the Manbij Military Council, which Turkey sees as an affiliate of the YPG, with members of the allied FSA factions it backs. Such a move would require Washington’s acquiescence.”

Metin Gurcan cautions, however, that at least for now, Turkey’s bark may be more than its bite with regard to a major military assault in eastern Syria.

“Turkey is anxious to pursue operations against the Kurds east of the Euphrates River,” writes Gurcan. “At the moment, however, Turkey’s best commando, armor and special forces elements are engaged in numerous operations: inside Turkey, in northern Iraq, in the northwest Syrian territory it controls in the Afrin area and at de-escalation outposts around Idlib in western Syria. This gives the impression that the Turkish military is overstretched. Without ending one of those fronts, it's very unlikely that Turkey would take on a corps-level, cross-border ground operation east of the Euphrates — one that would surely last more than six months. If it did, the Turkish army would launch a two-pronged operation from Kobani and Tell Abyad along Syria's northern border, linking up at Ain Issa. To do this, Turkey would need double the number of soldiers on standby at the border.”

“Considering the current force projection of the Turkish Armed Forces (TSK) at home and abroad, this would be impossible,” adds Gurcan. “Moreover, unless the US military — the sole ruler of the air space east of the Euphrates — would allow access, a military operation would be much too long and costly. The most important lesson Turkey has learned from its Euphrates Shield and Olive Branch operations is this: Don’t undertake an operation in northern Syria without ensuring close air support.”

There is also uncertainty in Ankara over Russia’s role. “Even though they are cooperating closely to counterbalance the US influence in Syria, the positions of Turkey and Russia regarding the Syrian Kurds and the YPG/PYD are not in line,” writes Idiz. “It is doubtful that Russia would come to Turkey’s assistance in clashes between Turkish forces and YPG fighters, especially if they have the potential to drag in US forces. Moscow is more likely to refrain from acts that would further escalate its own military tensions with Washington. … Another disturbing fact for Ankara is that Russia has not outlawed the PKK, let alone the YPG or PYD. Moscow’s problem is not with the YPG as such, but with the US presence east of the Euphrates. Otherwise, it is not opposed to seeing the Kurds involved in efforts to hammer out a new constitution for Syria.”