Turkey is probing ways to penetrate Kurd-controlled areas east of the Euphrates River, but the United States doesn’t seem ready to give up its relationship with the Kurdish People's Protection Units. 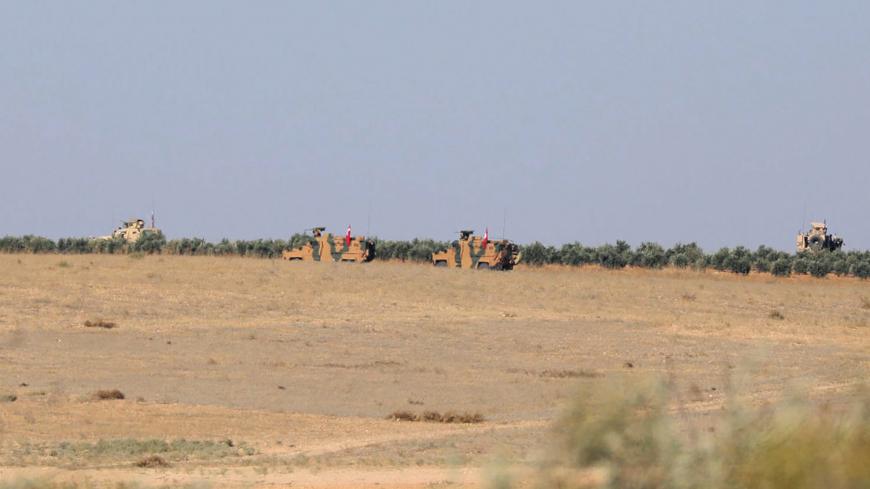 A Turkish flag flies on a military vehicle on the border at Manbij, Syria, Nov. 1, 2018. - REUTERS/Rodi Said

Is the four-year-old union between the United States and Kurds against the Islamic State in Syria approaching a messy divorce or a second honeymoon? Ankara is quite concerned with the answer, feeling Washington is stalling to avoid a breakup with the Kurdish People's Protection Units (YPG).

Ankara is trying to pressure Washington to make up its mind, but doesn't want to ruin its own relationship with the Americans. The most discussed question in Ankara nowadays is whether a dialogue or military pressure would be more effective to persuade the United States to terminate its military cooperation with the YPG.

Turkey is anxious to pursue operations against the Kurds east of the Euphrates River. At the moment, however, Turkey’s best commando, armor and special forces elements are engaged in numerous operations: inside Turkey, in northern Iraq, in the northwest Syrian territory it controls in the Afrin area and at de-escalation outposts around Idlib in western Syria. This gives the impression that the Turkish military is overstretched. Without ending one of those fronts, it's very unlikely that Turkey would take on a corps-level, cross-border ground operation east of the Euphrates — one that would surely last more than six months. If it did, the Turkish army would launch a two-pronged operation from Kobani and Tell Abyad along Syria's northern border, linking up at Ain Issa. To do this, Turkey would need double the number of soldiers on standby at the border.

Considering the current force projection of the Turkish Armed Forces (TSK) at home and abroad, this would be impossible. Moreover, unless the US military — the sole ruler of the air space east of the Euphrates — would allow access, a military operation would be much too long and costly. The most important lesson Turkey has learned from its Euphrates Shield and Olive Branch operations is this: Don’t undertake an operation in northern Syria without ensuring close air support.

But Ankara appears to be keeping an eye on potential military developments. For example, on Oct. 28, the YPG and Kurdistan Workers Party (PKK) positions at Zor Maghar, east of Kobani, were hit heavily with Turkish s and 203 howitzers. Ankara is uncomfortable with the defensive fortifications, tunnels and barriers the YPG is constructing in this area and especially resents the defensive preparations YPG is undertaking under the supervision of US soldiers — with military engineering equipment provided by the United States.

The situation on the ground is so complex, it's almost impossible to comprehend the US-Turkey relationship east of the Euphrates. Are they partners or adversaries? On one hand, the planned coordination center and an expansion of the fusion center in Ankara haven't yet materialized. This shows the countries have a low degree of trust at the strategic-political level.

On the other hand, there are signs that the ice is melting between Ankara and Washington. In the latest example, the two started joint patrols Nov. 1 at Manbij west of the Euphrates, in the area separating the US-supported YPG and Turkish-supported Free Syrian Army. These joint US-Turkish patrols were agreed on in June.

Why is Manbij so important? It's pure economics. Oil tankers coming from Deir ez-Zor and Raqqa are entering Turkey not through the Akcakale border crossing opposite Tell Abyad, but through Manbij. Every day, the hundreds of tankers that go through Manbij border customs produce a major revenue source of hundreds of thousands of dollars. Today, this money ends up in YPG coffers. Also, Manbij has a critical role in linking Turkey and the reconstruction of Raqqa and Deir ez-Zor. Any force that dominates Manbij will benefit from post-conflict reconstruction contracts and capacity building in northern Syria.

There are two main underlying reasons for Ankara’s lack of confidence in US aspirations in northeast Syria.

The first is the United States' unwillingness to end military relations with the PKK-affiliated YPG, even though it's been months since combat with IS ended. In its official documents, US Central Command defines everything it does in northeast Syria as Kurdish governance and stabilization efforts. It's no wonder Ankara perceives US actions there as state-building efforts.

The other cause of Ankara’s lack of confidence is that as Washington is supposedly setting up an anti-IS front, it's disregarding the political boundaries between Iraq and Syria. America's revisionist tendency to ignore existing political borders magnifies Turkey's perception that the United States is stalling at Manbij.

Washington must have noticed Turkey’s waning patience. On Nov. 6, following a visit to Ankara by US Deputy Assistant Secretary of State Matthew Palmer, Washington authorized a bounty up to $5 million for information on Kurdish leader Murat Karayilan, $4 million for Cemil Bayik and $3 million for Duran Kalkan — the PKK's top strategic decision-makers.

Why did the United States take this action? Ankara feels Washington was trying to prove its contention that the PKK and YPG are two distinct organizations. In other words, in return for hardening its attitude toward the PKK, Washington will ask Ankara to soften its position on the YPG. No wonder Ankara is confused by the move.

Will Manbij and the area east of the Euphrates be key to US-Turkish cooperation in northern Syria or a bomb to blow up their strategic partnership? No doubt Moscow and the Kurdish leadership at Qandil are waiting and watching closely for an answer.