Turkey is itching to go on the offensive against Kurdish forces in areas east of the Euphrates River in northern Syria, but the US role in the area continues to act as a deterrence. 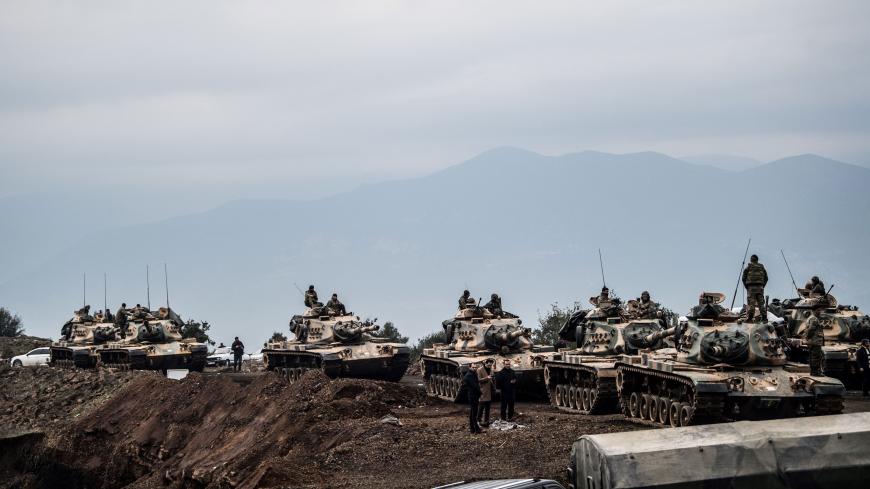 Tensions have risen in northern Syria amid threats by Turkish President Recep Tayyip Erdogan to intervene in areas east of the Euphrates River and Turkish artillery fire on Oct. 26 against Tell Abyad, Kobani and Zor Mughar. The Turkish attacks, which Ankara claims killed 16 fighters from the Kurdistan Workers Party (PKK), came the day after Erdogan held a summit in Istanbul with the leaders of Germany, France and Russia.

“We will eradicate the terror structure east of the Euphrates,” Erdogan asserted, referring to Syrian Kurdish groups that Turkey considers PKK affiliates. “We have completed our preparations and plans. Soon we will crush the terror outfit.”

The timing of Turkish artillery fire gave rise to speculation about tacit approval from the United States. A Pentagon spokesman said, “We are aware of Turkish statements about a planned offensive into northeast Syria and have been in touch with Turkey and the [Syrian Democratic Forces] to de-escalate the situation.” He further called on all parties to focus on defeating the Islamic State. The statement followed a telephone conversation between Erdogan and US President Donald Trump on the subject. The Turkish attack also coincided with the beginning of joint US-Turkish patrols in Manbij.

Yet, early November's US patrols in Jazira canton, in northeastern Syria, with the People's Protection Units (YPG), the backbone of the SDF, came as a shock to those anticipating a ground operation.

Thus the United States persisted with its seemingly conflicting policy of conducting patrols with Turkish troops in Manbij west of the Euphrates while cooperating with the PKK-affiliated YPG to the east. Washington has even offered a $12 million bounty for PKK leaders Murat Karayilan, Cemil Bayik and Duran Kalkan, but nonetheless continues to cooperate with the YPG.

Turkey views the bounty as an attempt to appease Ankara’s concerns about US relations with the YPG. Turkish Defense Minister Hulusi Akar told journalists Nov. 7, “We expect the same attitude toward the YPG, which is no different from the PKK.”

Although the bounty might have put the brakes on Turkey’s operation plans against Tell Abyad and Ras al-Ain, the reality remains that Ankara wants to expand its operations east of the Euphrates against Kurdish enclaves in northern Syria. According to Cevdet Yilmaz, vice chairman of the ruling Justice and Development Party (AKP), “Turkey will intervene when it decides the time is right.”

Any possible operation is expected to begin with Tell Abyad and Ras al-Ain and stretch all the way east to the banks of the Tigris. According to this plan, if successful, the 566-mile border between Turkey and Syria will be controlled by the Turkish army, including Qamishli and excluding only Tell Rifaat on the Kilis-Aleppo Road, where potential joint action with Russia could terminate the YPG presence.

The main reason Turkey is prioritizing Tell Abyad and Ras al-Ain is that in these ethnically mixed regions, the Kurds do not necessarily constitute the majority. In July 2012, while the Kurds were imposing control over the area, Turkey’s proxy militias from the Free Syrian Army (FSA) had crossed from Turkey into Tell Abyad and Ras al-Ain. While the YPG repulsed the forces entering Ras al-Ain, IS seized Tell Abyad, over which Turkey seemed unconcerned.

In 2015, however, when the YPG, along with its Arab partners under the SDF umbrella, began retaking Tell Abyad, Ankara protested the offensive, charging “ethnic cleansing” of the local population. The pro-government Turkish media insisted that Tell Abyad and Ras al-Ain were populated primarily by Arabs and Turkmens.

Ever since the Turkish army and its allied militias took control of Afrin in March, Erdogan has been working on a plan to do the same east of the Euphrates. The primary deterrent has been the United States flying its flag along the border region, as it did previously, preventing a Turkish attack against Manbij.

Despite Washington’s efforts to balance between Turkey and the Syrian Kurds, Ankara will not leave the YPG to hold territory along the Euphrates and in the border areas. In addition to deploying artillery fire and drone operations, Ankara is also likely to mobilize its allied opposition forces. On Nov. 3, the Syrian Human Rights Observatory reported that Turkey had dispatched some 1,200 FSA rebels from the outskirts of Aleppo to the border area.

Turkey will likely try to increase the pressure east of the Euphrates to squeeze more concessions from Washington on Manbij. Right now, Turkey’s main goal is to replace the Manbij Military Council, which Turkey sees as an affiliate of the YPG, with members of the allied FSA factions it backs. Such a move would require Washington’s acquiescence.

Future Turkish operations east of the Euphrates depend very much on the United States giving up on its partnership with the YPG. Washington will not, however, sever ties and cooperation with the YPG before reaching its goals of curbing Iranian influence in Syria and eliminating IS. Thus far, the United States has not found Turkey’s partnership proposals sufficiently convincing to sideline the SDF, though there are signs that Turkey will be allowed to take full control of Manbij now that it has released American pastor Andrew Brunson after detaining him for two years.

Increasing cooperation between the United States and Turkey on Syria could ring alarm bells and trigger counter moves by Moscow, as it could change the balance of power in the Syrian equation. Ultimately Turkey must preserve its role in the Astana partnership to maintain its military presence in northern Syria.