Turkey 'won’t be duped' by US in Syria

Washington’s decision to place a bounty on the heads of the PKK leadership has been met with suspicion and derision in Ankara. 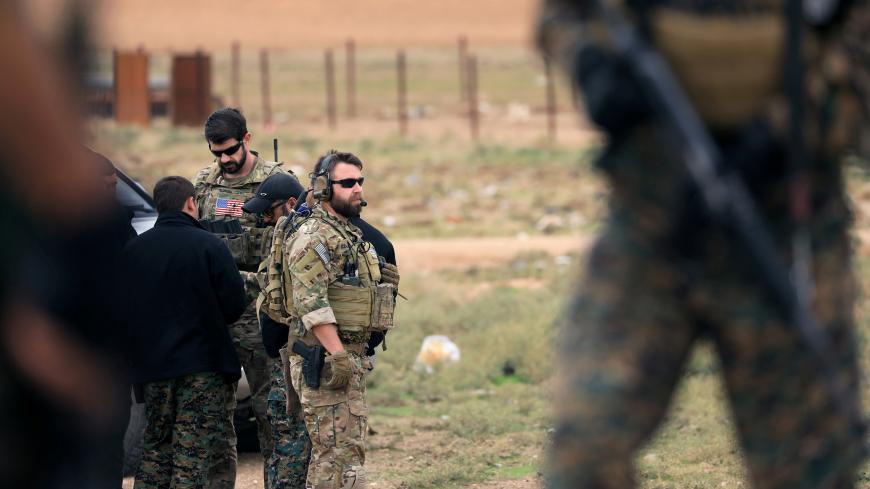 US troops are seen during a patrol near the Turkish border in Hasakah, Syria, Nov. 4, 2018. - REUTERS/Rodi Said

Turks have a saying for occasions when they receive unexpected gifts that leave them suspicious about the givers’ motives rather than delighted: “It’s not a holiday, so why did my brother-in-law kiss me?”

This was the feeling among Turkish government officials after US Deputy Secretary of State Matthew Palmer announced last week that the Americans had put bounties on the heads of the leaders of the Kurdistan Workers Party (PKK), which is outlawed by Turkey as a terrorist organization.

Palmer, who was in Ankara for talks, said the United States would offer up to $5 million for information leading to the identification or location of PKK leader Murat Karayilan, and up to $4 million for Cemil Bayik and $3 million for Duran Kalkan, his deputies.

Contrary to expectations on the American side, the unexpected announcement was met with caution in Ankara.

Defense Minister Hulusi Akar called it a positive development, but lamented that it was “too late” in coming and repeated Turkey’s demand that the United States sever its ties with the People’s Protection Units (YPG) in northern Syria. The PKK and YPG are one and the same for Ankara, which has also designated the YPG’s political wing the Democratic Union Party (PYD) a Kurdish terrorist organization.

The United States has banned the PKK as a terror group but refuses to do the same with the YPG and PYD.

“It is not possible for us to accept putting a reward on the PKK leaders on the one hand and sending trucks of tools, weapons and ammunition to the YPG on the other,” Akar told the official Anadolu news agency.

Remarks by Jim Jeffrey, Washington’s special envoy for Syria, only hours after Palmer's announcement left many in Ankara feeling justified in their suspicions about Washington’s unexpected gift.

Jeffrey told Turkish reporters by teleconference that the United States has no intention of severing its ties with the YPG in northern Syria. Washington is working closely with these groups in a large swath of northern Syrian territory east of the Euphrates River that the YPG captured from the Islamic State with US military support.

Jeffrey’s attempt to assure the Turkish side that the United States would not allow any security threats to Turkey from northern Syria failed to mollify Ankara. The Turks are concerned that the United States is digging in for the long haul in Syria to secure a region for the Kurds from where it can maintain its military foothold with a view to containing Iran.

Turkey remains opposed to any suggestion of autonomy for Syrian Kurds, fearing the effect such a win would have on its own restive Kurdish minority.

US Secretary of State Mike Pompeo heightened Ankara’s concerns when he told the Washington-based Jewish Institute for National Security of America last month that the Syrian Kurds (meaning the YPG and PYD) “have been great partners,” and added that Washington would “make sure that [the Kurds] have a seat at the table.”

President Recep Tayyip Erdogan has repeatedly warned that Turkey will rid the whole of northern Syria from the YPG — with or without US support — by sending in its army. Meanwhile, the Turkish military has started tactical shelling of minor YPG positions east of the Euphrates to demonstrate Ankara’s resolve.

Flying back earlier this week from Paris, where he attended the Armistice Day centenary, Erdogan told reporters accompanying him that Turkey would not be “duped by Washington’s ploy to legitimize the PYD by distinguishing it from the PKK.”

Burhanettin Duran, the director of the government-funded Foundation for Political, Economic and Social Research, summed up the mindset in Ankara in his column for the pro-government Sabah. Duran argued that Washington’s policy on the YPG had not changed since the Barack Obama administration.

“The goal was always to separate the YPG from the PKK in order to turn it into a proxy that can be used as required,” Duran maintained. He added that Washington’s intention was to “legitimize the YPG as the true representatives of the Syrian Kurds” so that it can participate in negotiations for a Syrian settlement.

These developments come against the backdrop of efforts by Ankara and Washington to normalize their ties following Turkey’s release last month of American pastor Andrew Brunson, who was detained on multiple terrorism charges. Washington rejected the charges as ridiculous and slapped sanctions on Turkey, leading to unprecedented strains between the two countries that once prided themselves on their strategic partnership.

A number of gestures by Washington since Brunson’s release contributed to the impression that ties were set to improve. They included the lifting of the US sanctions associated with the Brunson affair and a temporary waiver from oil sanctions imposed on Iran.

Expectations were high that the planned meeting between Erdogan and President Donald Trump in Paris over the weekend would help to iron out remaining issues. The differences over northern Syria, however, remain very much in place and may have become more intractable after Jeffrey effectively gave notice to Turkey that it will have to come to terms with the US-YPG/PYD alliance.

Turkey may have secured a higher profile for itself in Syria recently, especially after working out a cease-fire for Idlib with Russia and Erdogan’s hosting of an international Syria conference attended by the leaders of Russia, France and Germany. Nevertheless, Ankara still has to come up with a response to the US position on northern Syria.

Turkey has welcomed recent statements out of Moscow accusing the United States of trying to divide Syria by using the Kurds east of the Euphrates.

Even though they are cooperating closely to counterbalance the US influence in Syria, the positions of Turkey and Russia regarding the Syrian Kurds and the YPG/PYD are not in line. It is doubtful that Russia would come to Turkey’s assistance in clashes between Turkish forces and YPG fighters, especially if they have the potential to drag in US forces. Moscow is more likely to refrain from acts that would further escalate its own military tensions with Washington.

Another disturbing fact for Ankara is that Russia has not outlawed the PKK, let alone the YPG or PYD. Moscow’s problem is not with the YPG as such, but with the US presence east of the Euphrates. Otherwise, it is not opposed to seeing the Kurds involved in efforts to hammer out a new constitution for Syria.

Yalcin Akdogan, a deputy from Erdogan’s Justice and Development Party, believes that the PYD and YPG have become the Washington’s prime allies in Syria. He argued in his column for the pro-government Star, “The same PYD that they supported initially against the [Bashar al-] Assad regime has now become the essential actor in [US] efforts to redesign the region.” Akdogan also believes that the shelling of YPG positions by Turkey has disrupted US plans for northern Syria.

However, there are developments that suggest this shelling has merely strengthened Washington’s resolve to shield its Kurdish allies. A case in point was the joint patrols US forces mounted recently with YPG fighters along Syria’s border with Turkey. It has also not escaped the attention of analysts that the United States has an inordinately large number of soldiers deployed with the Syrian Democratic Forces (SDF) along Syria’s border with Turkey.

The SDF was set up by the United States and is made up mainly of YPG fighters, although it has Arabs, Assyrians and even Turkmens in is ranks. Ankara believes the SDF is another US ruse to shroud its close military ties with the YPG.

The absence of a coherent policy regarding the Syrian Kurds — one not predicated solely on trying to curb their aspirations — may have painted Turkey into a corner in Syria. There is no indication as yet that Turkey is going to try to address this situation by means of more realistic policies.

For the moment it prefers to issue angry threats that many believe it will be unable to carry out in the end — unless, that is, it is prepared to risk a direct or indirect confrontation with an apparently equally determined United States, in which event it could find itself without any international support.