Did US drag Turkey into 'Syrian quagmire'?

The Turkish government remains defiant in the face of warnings from the US, but there are those who believe Ankara was forced into the Syrian quagmire by Washington. 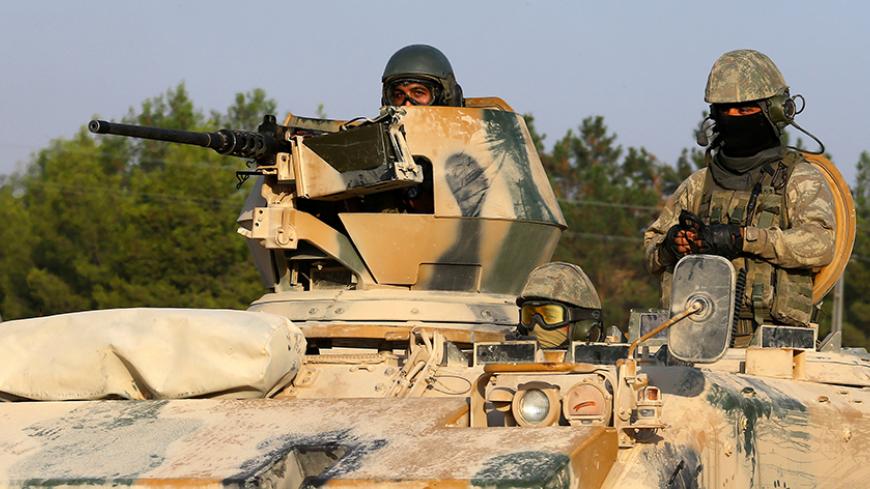 Turkish soldiers on an armored personnel carrier drive toward Karkamis, on the Turkish-Syrian border, in the southeastern Gaziantep province, Turkey, Aug. 27, 2016. - REUTERS/Umit Bektas

The United States has welcomed the Turkish-led liberation of Jarablus from the Islamic State (IS), to which the US Air Force also contributed. It is displeased, however, with Turkey’s operations south of Jarablus against the People’s Protection Units (YPG), the armed wing of the Kurdish Democratic Union Party (PYD) in Syria.

The YPG is the main element of the US-supported Syrian Democratic Forces (SDF), which recently wrested the strategic city of Manbij, west of the Euphrates River, from IS. The continued presence of YPG fighters in Manbij is causing fresh tensions between Ankara and Washington.

Turkey says the PYD and YPG are terrorist groups linked to the Kurdistan Workers Party (PKK), which has been waging a separatist terror campaign against civilians and security personnel in Turkey. Ankara does not want an autonomous Kurdish region along its borders.

The failed coup in July appears to have also strengthened Erdogan’s hand in Syria against the United States. Russia and Iran condemned the coup attempt outright, without waiting to see its outcome, which is the opposite of what the West did in Turkish eyes.

The result is that many Turks consider Russia and Iran to be more reliable than Western countries. After Turkey reset its Syria policy, Ankara is also closer to Moscow’s and Tehran’s positions regarding the future of Syria. Ankara is better poised now to get Russian and Iranian support for its approach to Syrian Kurdish aspirations.

The perception that the United States is reluctant to extradite Fethullah Gulen, the alleged mastermind of the attempted coup, has also resulted in a sharp increase in anti-American sentiments among Turkish government officials.

Russia’s relatively mild response to Turkey’s Operation Euphrates Shield is also noteworthy. Moscow merely said it was “deeply worried” over this development, but issued no admonitions, even though Damascus characterized this operation as a “blatant violation of its sovereignty.”

The Syrian statement was also accepted generally as being pro forma. Many believe Turkey is being tacitly supported by Russia and Iran, and also by the Bashar al-Assad regime, because its military operation will stop fresh gains by US-supported Kurds.

Turkey wants YPG forces to move to the east of the Euphrates. It also wants the PYD to end its efforts to join the lands west of the river stretching to the Azaz district, hoping to establish an autonomous Kurdish region.

Complicating the situation for Washington is the fact that Ankara is actively taking on IS now. Washington’s dilemma regarding this operation is also working to Ankara’s advantage since the United States has had to underline at the highest level that it does not support Kurdish aspirations in Syria.

During his recent fence-mending mission to Ankara, Vice President Joe Biden emphasized that the United States does not support a separate Kurdish entity. Biden said US officials have made it “absolutely clear” to the YPG that it must move back across the Euphrates, in line with promises made prior to the capture of the strategic city of Manbij from IS with US support.

“They cannot, will not and under no circumstances get American support if they do not keep that commitment.” Biden said

Ankara, however, is determined to maintain a wait-and-see stance rather than accepting such assurances at face value. The shelling of YPG positions south of Jarablus over the past few days by the Turkish military shows that it is not convinced yet that its demands have been met.

Turkey’s actions against the YPG elicited the first angry responses from Washington since the start of Operation Euphrates Shield on Aug. 24. "The United States was very supportive, and is very supportive of their general counter-[IS] activities and everything they did to secure the area between the border and Jarablus and then westward, but not south of Jarablus," US Defense Secretary Ash Carter told reporters Aug. 29.

Pentagon spokesman Peter Cook told the Voice of America on the same day that clashes between Turkish forces and the YPG were “unacceptable.” Indicating that there are no IS fighters where those clashes are taking place, Cook said they are prepared to support Turkey’s operations against IS, but would also continue supporting Kurdish-led forces, operating under the SDF banner.

"Uncoordinated operations and maneuvers only provide room for [IS] to find sanctuary and continue planning attacks against Turkey, the SDF, the United States and our partners around the world," Cook said, appearing to suggest that if these attacks came, Turkey would also be to blame.

Turkey is unlikely to be swayed by such dire warnings until it is convinced the Kurds have complied with its demands. Erdogan and Yildirim have said openly that the dual purpose of Euphrates Shield is to destroy IS and roll back the Kurds.

Responding to statements from Washington calling on Turkey to stop its operations against the Kurds, Deputy Prime Minister Numan Kurtulmus was defiant. “[The United States] is aware of our sensitivity in this regard. There are also promises that have been made. The PYD will not have a presence west of the Euphrates. … We are waiting for the United States to use its influence on the PYD,” Kurtulmus told reporters in Ankara.

Burhanettin Duran, an analyst for the Foundation for Political, Economic and Social Research in Ankara, which is close to the government, spelled out the main objectives of the Turkish military in Syria in a recent article.

He said this operation was the result of a need “to put a stop to problems created by the manner in which the US is combating [IS].”

“Clearing [IS] by using the YPG has caused double trouble. It enabled the area controlled by the YPG to expand and also forced [IS] to increasingly hit at Turkey as it was being pushed back,” Duran argued.

There are those, however, who believe Turkey was pushed into this intervention by the United States and will pay for it. Mehmet Yilmaz, a popular liberal columnist for the daily Hurriyet, is among those who believe this.

Yilmaz pointed to pictures of Turkish-supported FSA fighters in Syria wearing “flip-flops” and said they do not appear to be the force that will defeat IS.

“It seems the United States realized that the YPG-PKK is also not capable of destroying IS and wanted the only other standing army in the region [the first one being Iran] to get involved in this matter,” he claimed, echoing the sentiments of many Turks.

“We are up to our necks in the Syrian quagmire now, and it is not clear when we will get out, or how many of our citizens will suffer,” Yilmaz argued, adding that it had been “child’s play” for Washington to drag Turkey into this quagmire “by using the Kurdish card.”