Political developments in the region will determine the fate of the recent Turkish incursion into Syria. 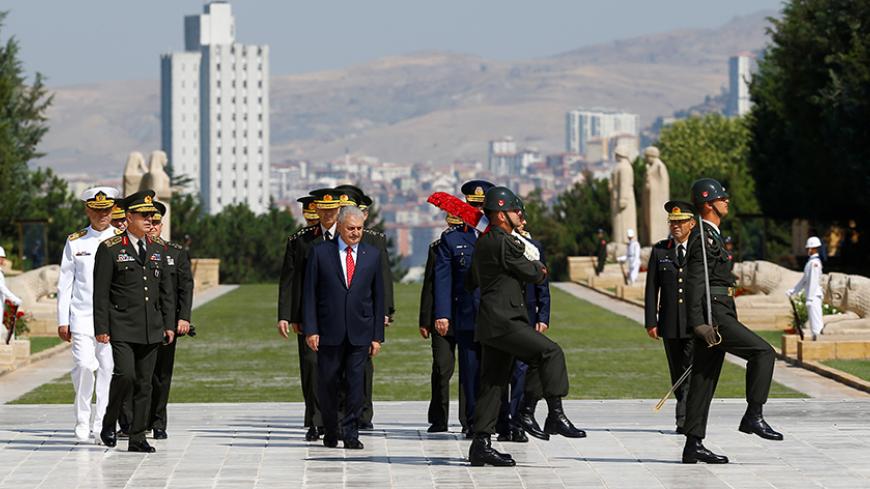 Let's be clear: Turkey's cross-border operation that captured the Syrian town of Jarablus was dramatic and unprecedented. However, it was not really aimed at the Islamic State (IS) but actually at the Syrian Kurdish Democratic Union Party (PYD) and its armed wing, the People's Protection Units (YPG).

Turkish officials at the highest level have revealed the real objective of the Turkish military operation.

Prime Minister Binali Yildirim, speaking on television about the main objective of the Turkish military incursion into Syria, said, "We did it [the Jarablus operation] to secure our frontiers, not to have casualties and damages to properties because of missiles, etc. On the other hand, we undertook the operation to remove [IS] from the region and not to let PYD-YPG fill the vacuum."

If Turkey wanted to undertake a military operation because of the IS threat, it should have done so much earlier. IS has been occupying Jarablus and its vicinity for a long time, yet Ankara had not felt any "security threats" to launch an operation. Until last month's botched coup, the Turkish military had a much stronger operational capacity and readiness than it does today. Therefore, the timing of the operation is not very convincing if the ostensible reason was the IS threat.

The YPG-dominated Syrian Democratic Forces captured the strategic town of Manbij from IS with US support, thereby effectively erasing Turkey's virtual "red lines," which denote where Turkey wants to keep the Kurdish group from crossing to the west of the Euphrates River.

Yildirim was quite unequivocal. About the liberation of Manbij from IS, he said, "When [IS] was ousted from there, they moved north to Jarablus and began attacking us from there. Behind them, PYD-YPG elements also arrived, and a threat emerged to our borders in the real sense. Therefore, we decided to undertake the military operation."

Turkish Minister of National Defense Fikri Isik reiterated the prime minister's explanation in an interview with NTV and said, "The operation has two fundamental aims. One, providing border security. Two, to not let PYD-YPG to be in that area. Until the FSA [Free Syrian Army] establishes control, to remain where we are is our right. Unfortunately, there is no Syrian government authority in that area. We are, as Turkey, defending the territorial integrity of Syria. The PYD has to withdraw to the east of the Euphrates. In our talks with the American side a week ago, we were told they will do so within two weeks. They didn't yet. We are closely following."

Foreign Minister Mevlut Cavusoglu, following a telephone call with US Secretary of State John Kerry, spoke about "American guarantees that the YPG would not be present in the west of Euphrates." Cavusoglu claimed that the YPG commits "ethnic cleansing" wherever it operates.

Only hours after Turkey's "Operation Euphrates Shield" commenced, US Vice President Joe Biden landed in Ankara to patch up the deteriorating Turkish-US relations. To soothe the Turks, Biden said, "We have made it absolutely clear to the elements that were part of the Syrian Democratic Forces, the YPG that participated, that they must move back across the river. They cannot, will not, and under no circumstance get American support if they do not keep that commitment, period." These words are the most strongly worded American commitment to the Turkish side so far on a sensitive aspect of the Syrian conflict.

Biden's statement and the following developments probably evoked among Kurds the memories of 1975, when they were "sold out" to Iraq by the Americans. In 1975, after the Algiers Agreement between Imperial Iran and Baathist Iraq, then-US Secretary of State Henry Kissinger persuaded Tehran to cease its support for the Kurdish insurgency led by Mustafa Barzani (father of Massoud Barzani, the current president of the Kurdistan Regional Government) against Baghdad. The insurgency soon collapsed, and a huge political and humanitarian calamity befell the Kurds.

While the geopolitical equation is different in Syria today, it is important to note that the YPG and the regime of Syrian President Bashar al-Assad recently fought in the town of Hasakah in northeastern Syria. The intense fighting ceased thanks to Russian mediation. PYD leader Salih Muslim accused Turkey and Iran of provoking Syria against them.

Indeed, Ankara is recalibrating its policy vis-a-vis Damascus, moving to closer cooperation with Tehran and engaging in a rapprochement with Russia.

With such shifting variables in the Syrian equation, the PYD-YPG probably worry about being sandwiched between converging interests of bigger regional and international actors.

In the aftermath of the Turkish military operation in Jarablus and Biden's visit to Ankara, developments on the ground in Syria should be followed to see the Russian game plan vis-a-vis the Kurds and Turkey.

Everything so far suggests that military considerations in "Operation Euphrates Shield" played a minimal role compared to their political-strategic objectives. To better understand the Syrian quagmire, bear in mind that the distance of Jarablus to the adjacent Turkish town of Karkamis is only a stone's throw away. Jarablus is on the border with Turkey, and it does not take much military effort to move there. The Turkish army deployed 200 soldiers of a mechanized unit and 150 special forces. Under air cover of the coalition and artillery fire from Turkey, 10 tanks moved in and out of Jarablus.

It seems IS did not put up a real resistance and instead withdrew south. Two FSA fighters were killed, while 1,500 FSA fighters were brought into Jarablus from across the Turkish border. Given these facts, the operation hardly qualifies as a "Turkish invasion" of Syria.

Most of the FSA groups involved in the operation are Salafists composed of Arabs and Turkmens, trained and logistically supported by Turkey. But they have a miserable record of not being able to hold ground in northern Syria against IS or the Kurds. If IS comes back or if the Kurds do not retreat east of the Euphrates and move to the area between Manbij and Jarablus, Turkey could be obliged to maintain its military presence in the area.

The days ahead will show how deep and how long Turkey will remain in Syrian territory. The fate of the Turkish operation will not be decided primarily by military requirements but by political ones and according to the interplay of the major players in Syria — the United States and Russia above all.

Only then will we understand whether or not Turkey stepped into the Syrian quagmire.