Ankara reconsiders its Syria policy amid strains in US-Turkey ties and a reset in Iran-Turkey diplomacy. 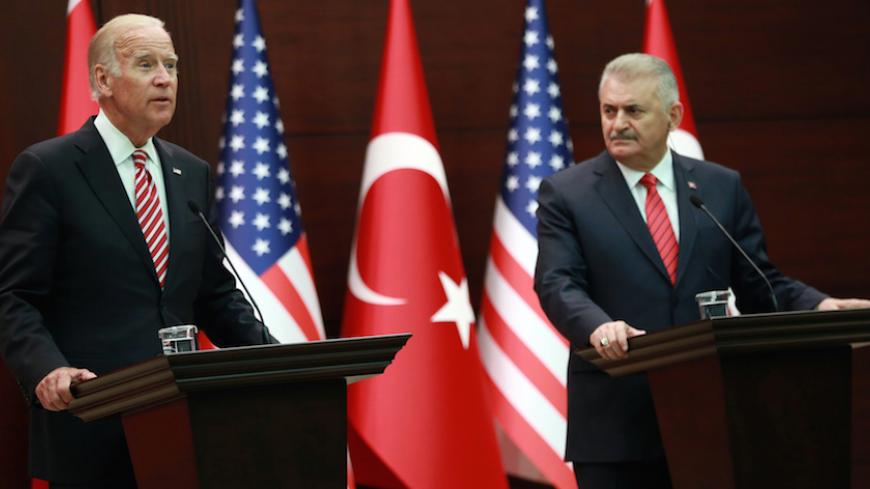 It is no secret that the Aug. 24 Turkish military incursion into Jarablus, which sits less than 30 kilometers (roughly 19 miles) from the Turkish-Syrian border, was secondarily about the Islamic State (IS) and primarily about checking the advances of the People's Protection Units (YPG), the armed wing of the Kurdish Democratic Union Party (PYD) in northern Syria, as Cengiz Candar recounts this week.

Metin Gurcan, citing sources in Ankara, reports that IS “had been withdrawing from Jarablus for two weeks. The YPG had been preparing to move north to capture Jarablus, but Ankara pre-empted the move through [Operation] Euphrates Shield. Ankara's action is further confirmation that the true target of the operation is not IS, but to block YPG’s domination of northern Syria.”

The Obama administration has so far managed to prevent a major escalation over the Turkish-Kurdish fault line in Syria, which is no small achievement. The YPG is the backbone of the Syrian Defense Forces (SDF), the most effective armed group battling IS. The Syrian Kurdish group has, however, in recent weeks sought to press its gains, including in Hasakah, where Russian mediation walked back a confrontation between Syrian government and YPG forces, as well as in Manbij and Jarablus, where the SDF has staked out territory west of the Euphrates, which has alarmed Ankara.

Syria’s Kurds are picking a poor time to test the limits of their partnership with the United States. Conspiracy theories have circulated in Turkey of alleged US complicity in the failed military coup against Turkish President Recep Tayyip Erdogan last month. US-Turkey relations, already under strain, therefore required some diplomatic triage. During an Aug. 25 visit to Ankara, US Vice President Joe Biden fully backed the Turkish operation in Jarablus, stressed that the US supports a “united Syria” with “no separate entity on the Turkish border” and laid out a US red line that should have cheered his Turkish hosts when he said, "We have made it absolutely clear to the elements that were part of the Syrian Democratic Forces, the YPG that participated, that they must move back across the river. They cannot, will not, and under no circumstance get American support if they do not keep that commitment, period."

Biden could not have been more clear on the limits of US support for its Syrian Kurdish partners. The question is whether that will be enough for Erdogan. In his remarks alongside Biden, the Turkish president again lumped the PYD and the YPG, as well as the Kurdistan Workers Party (PKK), with IS and Jabhat al-Nusra — “all of these organizations are terrorists.” The United States considers the PYD and the YPG as partners in the battle against IS, not terrorists, and draws a distinction between the PYD and the PKK.

The balance of forces in Jarablus may further complicate the next US steps in northern Syria, especially given the role of US special forces in the region. Gurcan reports that “the heavy presence of armored and engineering forces along the border could be a sign of Ankara’s intention to set up a permanent base at Jarablus modeled after the Bashiqa base near Mosul in Iraq.” Candar adds that the Turkish military coordinated “Operation Euphrates Shield” with about 1,500 Free Syrian Army (FSA) fighters, who have a “miserable record” of holding territory. Many of the FSA forces are composed of Salafists, and Gurcan adds that “their numbers are expected to reach 5,000-strong as they are joined by perhaps a dozen armed groups such as Ahrar al-Sham.” Ahrar al-Sham is allied with the Syrian Conquest Front, the rebranded Jabhat al-Nusra, al-Qaeda’s affiliate in Syria. The SDF and the YPG, unlike the FSA, have so far avoided alliances with the Syrian Conquest Front and other Salafi groups.

Ankara’s overriding objective of preventing an autonomous Kurdish region in Syria has sparked some signs of a rethink in Turkey’s approach to Assad, as Amberin Zaman reports. Erdogan is unlikely to end his support for Syrian armed groups, which provide leverage against both Damascus and the YPG. Zaman writes, “It is more likely that Ankara will wait for the outcome of the US presidential elections and gauge the new administration’s Syria policy before making any drastic changes to its own.”

Ankara is not waiting for the US elections in order to reset its relationship with Tehran, including finding some common ground on Syria. Iranian Foreign Minister Mohammad Javad Zarif visited Ankara on Aug. 12, a continuing sign of “solidarity” and “goodwill” after the failed coup. One week later, Turkish Foreign Minister Mevlut Cavusoglu was in Tehran. Ali Hashem reports, “The shared interest in preventing the emergence of a Kurdish state puts Iran and Turkey on the same page when it comes to exerting all possible efforts to keep Syria united and under centralized rule. In other words, Iran and Turkey may be on the path to once again being able to reach compromises. In this vein, another Iranian official who spoke to Al-Monitor on condition of anonymity said that in addition to the public high-level meetings that have taken place or are slated to take place between Iranian and Turkish political officials, there are military and security meetings ongoing behind the scenes.”

For the United States, the cinder in the eye, for now, in resetting ties with Turkey is the possible extradition of Fethullah Gulen. Mustafa Akyol writes that Erdogan considers the coup attempt as “Turkey’s 9/11.” The Turkish president is keeping score on who is “with us or against us,” as US President George W. Bush declared after al-Qaeda’s attack on the United States in September 2001.

It is difficult to imagine, in the present climate, Turkey accepting a “no” in its request to extradite Gulen to Turkey, despite the detailed explanation provided by Biden of the constitutional and legal niceties of the US extradition process. Turkish Prime Minister Binali Yildirim cleverly foreshadowed the bumpy road ahead when he said, standing next to Biden, that while the Erdogan government considers the US denunciation of the coup the “final statement” on the subject, “I am sure that the healthy and sound functioning of the processes with regard to the extradition of the head of the terrorist organization will also, in a short amount of time, return or rectify the people's perception back to their normal, positive situation.”