Truce brings quiet, but not stability, to Turkey-Syria border

Despite the current truce, the border between Turkey and northern Syria is still riddled with unrest. 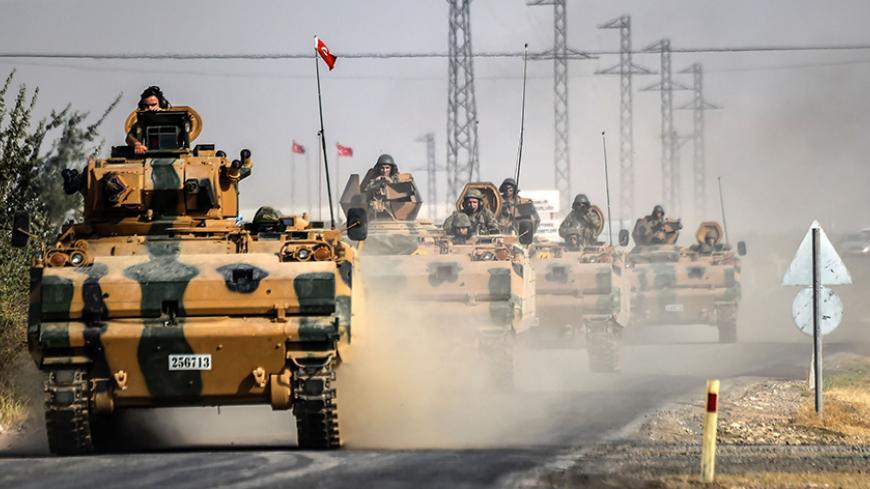 GAZIANTEP, Turkey — The United States is praising the truce between forces supported by Turkey and Kurdish fighters. White House spokesman Josh Earnest said Aug. 30, “The United States welcomes the overnight calm between the Turkish military and other counter-[Islamic State (IS)] forces in Syria.”

Shirvan Darwish, the media spokesman for the Manbij military council, which is allied with the Syrian Democratic Forces (SDF) and is one of the parties to the truce, told Al-Monitor, “The truce has been holding for three days, and no breach has been registered by either of the two sides.” He added, “We are committed to appeasement because we are part of the ground forces of the international coalition fighting the terrorist IS organization.”

In a striking development that may further complicate the Syrian crisis, Turkey supported its allies in the Syrian opposition Aug. 24 as they took control of the city of Jarablus, located on the border with Turkey. The operation involved the military council of the city of Jarablus, which is allied with the SDF, as Free Syrian Army (FSA) factions supported by Turkey clashed with the council. The FSA factions took control of lands and villages in the southern countryside of Jarablus after Turkish warplanes and artillery launched a violent attack to support factions allied with it in their military operations in Jarablus.

The border city of Jarablus was the last border crossing between Syria and Turkey under IS control. After the Turkish army launched its military operation in northern Syria, Turkish officials said their goal in Syria was to expel IS and prevent Kurdish fighters from expanding their control along the border. Turkish President Recep Tayyip Erdogan repeatedly warned against the advance of Kurdish fighters to the west bank of the Euphrates River, which he deemed a “red line.”

Speaking to Al-Monitor, Turkish author and analyst Mohammad Zahid Gul said, “The Turkish government perceives the Democratic Union Party [PYD], which is fighting in Jarablus, as a threat to Turkish national security even if it is a Syrian party. Its terrorist acts have affected Turkish territory and killed Turkish people, hence the Turkish military operation Euphrates Shield, which came about to prevent the PYD from entering Jarablus.”

Turkish Foreign Minister Mevlut Cavusoglu said during a Aug. 29 joint press conference with his Dutch counterpart Bert Koenders in Ankara, “The People's Protection Units [YPG] and those fighting with them are forcing residents to flee the areas that they seize, including the Kurds, amid an operation of ethnic cleansing.”

Gul accused the SDF of being a political and military movement that “defers to the will and leadership of the PYD, led by Salih Muslim,” and noted, “Terrorist organizations are controlling Jarablus and other areas while using them to launch attacks against Turkey and its people — and this is something that Turkey will not allow. Turkey will not remain idle as military bases and political entities that encroach upon Syrian land are being built,” a reference to the PYD and Kurdish units.

However, the United States is providing support for the YPG in the fight against IS in Syria while Turkey — Washington’s NATO ally — believes that these units are an extension of the banned Kurdistan Workers Party, which has been fighting for autonomy in the mainly Kurdish southeastern part of Turkey for three decades now.

Aldar Khalil, a leading figure in the Democratic Society Party, told Al-Monitor that the Turkish intervention in Syria is a violation of national sovereignty.

He stressed that this move does not respect international resolutions, saying, “The sponsors of the Syrian issue [Russia and the United States] should be stricter regarding such violations that [we] describe as occupation.” He said Turkey's claim that it wants to cleanse the area of IS militants and prevent Kurds from seizing territory is a product of "Turkey’s fear of the Kurdish project and our approach to the Syrian crisis. The rightful fight against terrorism and tyranny that we have been waging will be against any occupation and any party attacking us.”

The United States considers the clashes between the Turkish troops and military groups allied with itself unacceptable and called on all of the parties to focus on the fight against IS.

Brett McGurk, the special US presidential envoy for the global coalition to counter IS, tweeted Aug. 29, “We want to make clear that we find these clashes — in areas where [IS] is not located — unacceptable and a source of deep concern.”

McGurk called on all parties to lay down their weapons. “The US is actively engaged to facilitate such deconfliction and unity of focus on [IS], which remains a lethal and common threat,” he said in another tweet.

Meanwhile, Sihanouk Dibo, the presidential adviser to the PYD, warned against the Turkish intervention in northern Syria. He told Al-Monitor, “Turkey is now in a state of legal confusion given the violation of Syrian sovereignty on one hand and a state of hostility against the aspirations for freedom, democracy and coexistence that the components of north Syria and Rojava have on the other. These components include Christians, Assyrians, Arabs, Kurds, Armenians and Circassians.”

Dibo continued, “The aim of the Turkish occupation of Syria through Jarablus is to oppose the Kurdish cause and the Kurdish people, be they in or out of the self-administration [project]. The Turkish regime is currently among the weakest in the region, and it is in a shaky position as it reels under the brunt of political, economic and social crises.”

Gunmen loyal to the SDF, which are backed by the United States in the fight against IS, headed Aug. 29 to the south of the Sajur River, which crosses the administrative border between Jarablus and Manbij, after Turkish forces advanced deep into Syrian territory from Jarablus, which they seized from IS.

In a statement Aug. 29, the Jarablus military council announced a “withdrawal of our troops to a line located to the south of the Sajur River to protect the lives of civilians, and so Turkey has no pretext to continue its strikes against villages and civilians.”

Col. Ahmed Osman, head of the Sultan Murad rebel group, told Reuters Aug. 28 that the Turkey-backed rebel forces were "certainly heading in the direction of Manbij" since SDF and YPG forces had fortified their positions rather than evacuate.

Speaking to Al-Monitor, Redor Khalil, spokesman for the YPG, said he considers Turkey's military intervention in Syria “a blatant attack on the Syrian internal affairs," adding, "It is the result of an agreement between Turkey, Iran and the Syrian government.”

Khalil denied that there are reinforcements headed to Manbij, saying, “Turkey's claims whereby it is fighting units west of the Euphrates are unfounded, and they are just false pretenses aimed at expanding the Turkish occupation of Syrian territory.”

The Syrian-Turkish border was drawn by the Treaty of Sevres in 1920 and stretches along approximately 900 kilometers (560 miles). Around 700 kilometers (435 miles) of it are subject to the control of the SDF, whose mainstays are the Kurdish military units, starting from the west of the Tigris River until the east of the Euphrates. The armed opposition factions and Jabhat Fatah al-Sham, formerly known as Jabhat al-Nusra, control about 150 kilometers (93 miles). And all that is left for IS is 30 kilometers (18 miles) located between the city of Jarablus and town of al-Rahi after FSA factions recovered the town from IS' grip on Aug. 27.