Turkish President Recep Tayyip Erdogan has expressed Turkey’s keenness to be part of the liberation of the two IS strongholds of Raqqa and Mosul, but continuing differences with Washington and Baghdad make this difficult. 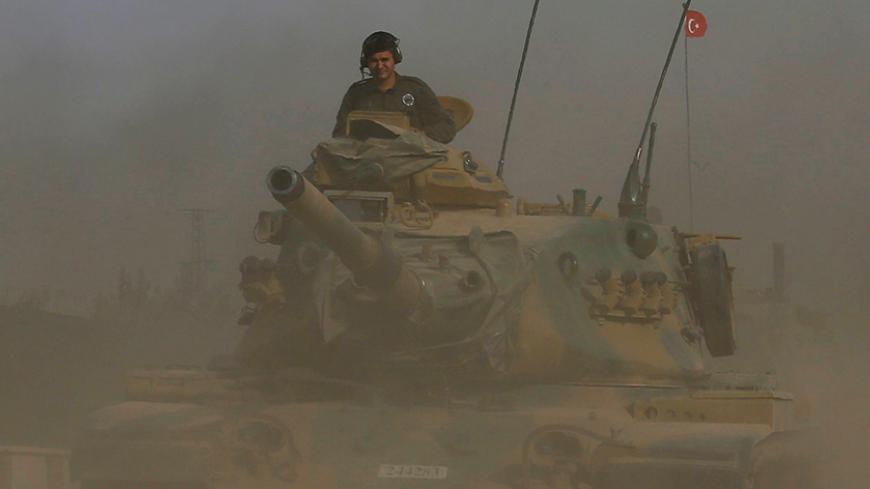 A Turkish tank drives toward Karkamis on the Turkish-Syrian border in the southeastern province of Gaziantep, Turkey, Aug. 25, 2016. - REUTERS/Umit Bektas

With US-led operations against the Islamic State’s strongholds of Raqqa in Syria and Mosul in Iraq looming, Ankara and Washington are engaged in intense talks to determine Turkey’s involvement in them.

President Recep Tayyip Erdogan has indicated that Turkey wants in on both operations, declaring that US President Barack Obama called for Turkish cooperation in Raqqa during their recent meeting at the G-20 summit in Hangzhou, China. Turkish and American suspicions about each other’s ultimate motives, however, continue to make cooperation difficult.

The US alliance in Syria with the People's Protection Units (YPG), the armed wing of the Democratic Union Party (PYD), remains the main obstacle. Turkey says the Kurdish YPG and PYD are terrorist groups linked to the outlawed Kurdistan Workers Party (PKK).

Meanwhile, Baghdad’s insistence that Turkish forces in Iraq be withdrawn, a position supported by Washington, remains an obstacle to Turkey’s participation in the liberation of Mosul.

Other issues such as the possible extradition from the United States of Fethullah Gulen, the alleged mastermind of the failed coup attempt in Turkey in July and US criticism of undemocratic developments in Turkey after the coup are also causing friction between the two “strategic partners” and could undermine cooperation in Syria and Iraq.

"Raqqa is one of the issues the United States and Turkey are currently discussing,” Erdogan told reporters while flying back from Hangzhou. “We need to demonstrate our presence in the region. If not, terrorist groups such as [IS], the PKK and its Syrian offshoot the YPG will fill the vacuum," he said.

The problem for Washington, however, was embedded in these remarks. The United States does not see the PYD or YPG as terrorist groups and says it will continue to work with them against IS in Syria.

US Defense Secretary Ashton Carter warned Turkey at the end of August, after the Turkish army wrested the Syrian town of Jarablus from IS and started moving south against YPG forces, to stay clear of the US-backed Syrian Democratic Forces, largely made up of YPG fighters.

"The United States was very supportive, and is very supportive of [Turkey's] general counter-[IS] activities and everything they did to secure the area between the border and Jarablus and then westward, but not south of Jarablus," Carter told reporters at the Pentagon.

US State Department spokesman John Kirby repeated Washington’s position after the latest US-Russian-brokered cease-fire in Syria came into force. “We don’t want to see violence or clashes between Turkish forces and Kurdish forces,” Kirby said Sept. 12 during his daily news briefing, adding that fighting IS was where the United States wanted energies to be applied.

A Western diplomat in Ankara who wished to remain anonymous due to his sensitive position said Turkish and US expectations regarding Raqqa were ultimately discordant. “The Americans suspect that Turkey only wants to join the Raqqa operation to prevent the PYD from gaining a foothold there,” the diplomat told Al-Monitor.

Retired Brig. Gen. Naim Baburoglu spelled out Turkey’s strong suspicions about US intentions regarding the Kurds in Syria and Iraq. “The basic reason why [Washington] gives importance to the PYD is that it wants a Kurdistan in the north that will be under the tutelage of the United States, and which will be a second Israel for it. The US’ unchanging strategic aim in the Middle East is for a united and independent Kurdistan,” Baburoglu argued in his column for Gercek Gundem, an online news outlet.

Burhanettin Duran, the general coordinator for the pro-government Foundation for Political, Economic and Social Research in Ankara, says Turkey’s aim is to develop a comprehensive approach not to just fight IS, but also to block PKK and PYD aspirations in Iraq and Syria.

“Right now, central governments are losing power to sub-state actors and terrorist groups in Syria and Iraq alike. At the same time, [IS'] self-proclaimed caliphate and the armed, PKK-affiliated Syrian [YPG's] pan-Kurdism blurs the border between the two countries,” Duran wrote in his column for Sabah.

“Despite the risk of overstretching its resources, Turkey believes that the right move is to develop a comprehensive strategy to fight both groups,” he added.

Erdogan said in a public address this week that Turkey is also keen to participate in the operation to free Mosul. Lauding the success of the Turkish military’s Operation Euphrates Shield against IS in northern Syria, he said there was a need for a similar action in Iraq. “The solution to the Mosul problem passes through lending an ear to Turkey’s rational perspective and suggestions,” Erdogan said.

“Our hope is that the central government in Iraq will see this,” he added, thus revealing that differences between Turkey and the Iraqi government persist.

According to Duran, Turkey is “objecting to a power grab by the PKK and Shiite militants in Mosul at the expense of local Turkmens and the peshmerga.”

Iraqi Prime Minister Haider al-Abadi called on all Turkish troops in Iraq to be withdrawn after Turkey deployed troops and tanks in Bashiqa, a town north of Mosul, in December 2015. Ankara says these forces are necessary to fight IS.

Abadi also got backing from Washington. “The US does not support military deployments inside Iraq absent the consent of the Iraqi government,” Brett McGurk, Washington’s envoy for the US-led anti-IS coalition, tweeted at the time.

During the Arab League summit in Mauritania in July, Iraqi Foreign Minister Ibrahim al-Jaafari said, “We have called on the Turkish government many times via diplomats to return their forces to Turkey.” He went on to call on Arab countries to apply pressure on Turkey to make it comply with the Iraqi demand.

Ankara has not heeded these calls, but it is not clear how it hopes to join any operation against Mosul under these conditions. Turkey’s difficulty with regard to the Syrian Kurds is not restricted to the United States, either.

Although Russia has ostensibly distanced itself military from the YPG, it continues to argue that the Syrian Kurds must take part in negotiations aimed at ending the Syrian crisis. While Ankara welcomed the US-Russian-brokered cease-fire in Syria, Turkish officials are aware that if it holds, current lines on the ground drawn by all the sides in Syria will hold, too.

This means the PYD will remain in places Turkey does not want to see them. Pro-government analysts such as Duran declare that this effect could leave Turkey no choice but to take unilateral military steps against the PYD and YPG, but the odds are against Ankara.

Al-Monitor's Western diplomatic source suggested that Turkey may have overreached with Operation Euphrates Shield. “By declaring the aim of this operation to be both IS and the YPG, and moving against YPG positions, Turkey might have painted itself into another corner in Syria, because this seems to have only strengthened US and European resolve to back the Syrian Kurds,” the diplomat said.