Military and political observers say the Turkish government's failure to recalibrate its policies to better cooperate with the United States, Russia and Iran is undermining Turkey's security interests in Syria and Iraq. 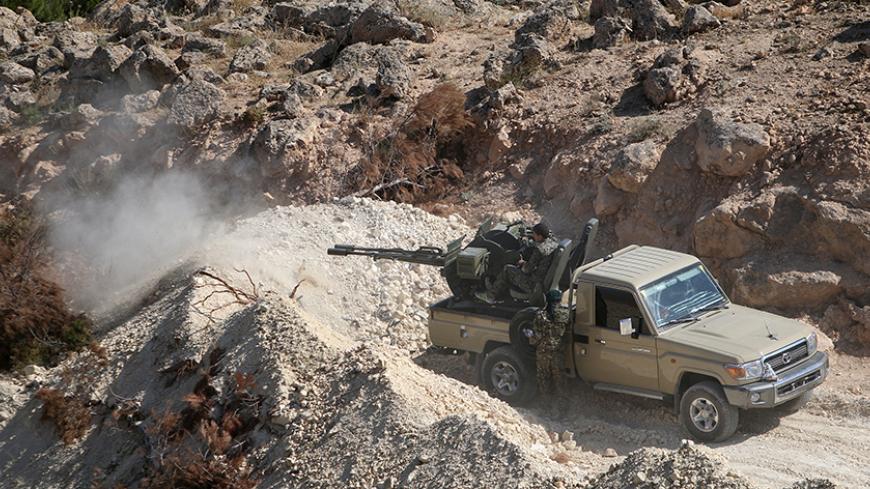 A fighter of the Syrian Democratic Forces mans an anti-aircraft weapon in the southern rural area of Manbij, in Aleppo province, Syria, May 31, 2016. - REUTERS/Rodi Said

Turkey appears more like a concerned onlooker than an active participant in Iraq and Syria, as major US and Russian-supported offensives against the Islamic State (IS) continue to gather momentum, and key players jockey to gain spheres of influence in and around Fallujah, Mosul, Manbij and Raqqa once these cities are liberated from IS.

Turkey's only participation in these offensives has been to allow US-led anti-IS coalition jets to take off from Incirlik Air Base, and to engage in cross-border shelling of IS positions in northern Syria, mostly in response to IS shells lobbed into Turkey.

Meanwhile, predominantly Arab and Turkmen groups supported by Ankara, and operating under the broad umbrella of the Free Syrian Army (FSA), continue to perform poorly against IS. This contrasts sharply with the gains of the US-supported Syrian Democratic Forces (SDF), the bulk of which are made up of fighters from the Kurdish People's Protection Units (YPG).

Ankara considers this group to be a terrorist organization because of its links to the outlawed Kurdistan Workers Party. Turkey is concerned that once the SDF ousts IS from the "Manbij pocket," one of the regions where the fighting is currently concentrated, this will enable the Kurds to gain the 98-kilometer (60-mile) stretch of land between Jarablus and Azez and establish an autonomous region for themselves along the Turkish border.

Turkish military observers believe there is an effort on the part of the United States for Kurds to hold this region, despite reassurances to the contrary given to Ankara. Retired Brig. Gen Naim Baburoglu points out that seeing Kurds move west of the Euphrates was once a "red line" for Turkey.

"The myth about a red line is finished as the YPG gradually settles itself in that region. The United States says the SDF is Arab-led, and that the area between Jarablus and Azez will not be left to the Kurds, but it is helping the Kurds increase the territory they hold and will eventually allow them to control these areas," Baburoglu told Al-Monitor.

To underline the Turkish government's confused policy, Baburoglu also pointed out how Ankara is allowing US jets taking off from Incirlik Air Base to provide help to YPG fighters against IS. He said any government with self-assurance and a coherent policy would not have allowed this to happen.

Former Chief of the Turkish General Staff Ilker Basbug repeated Turkey's big fear during a recent television interview and said the establishment of a "Kurdish corridor" along the Turkish border would pose a major threat to Turkey.

Basbug echoed another belief among military observers and said an offensive against Mosul in Iraq could start soon and indicated that Turkey's participation in this operation was also not wanted. Other military observers add that the majority of players in the region, with the possible exception of Saudi Arabia and Qatar, are strongly opposed to any Turkish military presence in Iraq and Syria.

Fearing a reprisal by Russia, Turkey has been unable to fly its jets in Syrian airspace or deploy troops in the region since it downed a Russian fighter jet in November. The jet was shot down after it strayed into Turkish airspace while on an operation against anti-Assad forces in northern Syria.

"Turkey's singularly pro-Sunni policies and support for the Muslim Brotherhood has long since been noted by the US which — like Baghdad — does not want any active Turkish participation in the push to liberate Mosul because of concerns that Turkish soldiers will refuse to leave the area when asked to do so," Baburoglu said.

Baghdad is still calling for Turkish troops deployed in the Bashiqa camp near Mosul against Iraq's wishes to be withdrawn. Washington has also called for these troops to be withdrawn but Turkey has refused to do so, thus fueling suspicions about Turkish intentions in Iraq.

A Western diplomatic source who wished to remain anonymous due to his sensitive position told Al-Monitor that mistrust of Ankara's aims has turned Turkey in the eyes of many of its North Atlantic Treaty Organization (NATO) allies into a complicating rather than supporting factor in the fight against IS in Iraq and Syria.

Ankara remains locked on Bashar al-Assad's ouster, on preventing Kurds from gaining territory or political clout in northern Syria and on bolstering the position of minority Sunnis in Iraq even as it is losing on all three fronts.

Retired Maj. Gen. Armagan Kuloglu underlined, however, that the government's current stand will only ensure that Turkey's strategic security interests remain in jeopardy.

"The mistake made at the start insisting for Assad to go is more apparent than ever. He was controlling things in his country. Turkey's problems started when he began to lose control. Ankara has to establish contacts with Damascus if its interests are not to be undermined further," Kuloglu told Al-Monitor.

"Turkey has to also mend fences with Russia and cooperate with Iran if it wants to have a say in developments in Syria and Iraq," Kuloglu said, pointing to the common interest between Ankara and Tehran in keeping Kurdish aspirations in check.

"The US changed its Syria policy. We failed to read this change and are now paying the price for it," Yilmaz told Hurriyet newspaper this week, arguing that the government remains obsessed with Assad.

Keeping in mind its continuing obsession with undermining Kurdish aspirations, it remains to be seen how much longer Ankara can sustain a policy, which may be gaining President Recep Tayyip Erdogan political points among his Islamist and nationalist supporters at home, but which is clearly undermining Turkey's interests and leaving it as the least influential player in a region where it once believed it was the most important actor.