Ankara’s Kurdish phobia underlies its inability to come up with realistic strategies that will also serve its own long-term security interests. 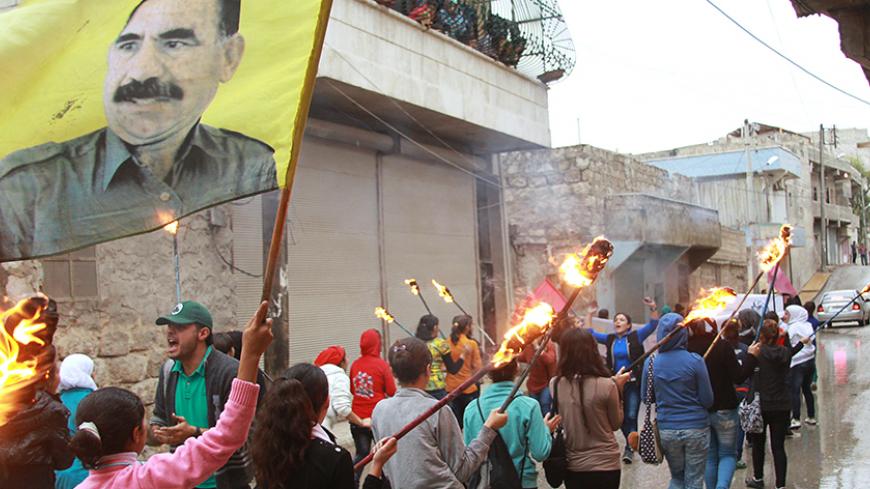 Kurdish demonstrators carry an image of Abdullah Ocalan, jailed leader of the Kurdistan Workers Party, as they march during a demonstration against Islamic State insurgent attacks, in the Sheikh Maksoud neighborhood of Aleppo, Oct. 17, 2014. - REUTERS/Ammar Abdullah

Turkey’s inability to produce a realistic strategy toward Syria and to coordinate its policy with its allies is coming home to roost, leaving it facing multiple dilemmas that are unlikely to be resolved soon. Ankara’s war with the outlawed Kurdistan Workers Party (PKK) and its related effort to prevent Kurds from gaining ground in northern Syria remains Turkey’s main problems.

This complicates, if not prevents, headway by the US-led coalition against the Islamic State (IS) in the region. Washington, by its own admittance, is trying to maintain a delicate balance between Ankara and the Democratic Union Party (PYD), the umbrella organization of the Syrian Kurds, which Turkey says is a terrorist group linked to the PKK.

While acknowledging that the PKK is a terrorist organization, Washington has refused to do the same for the PYD and its military wing, the People’s Protection Units (YPG), with which it is allied against IS.

The successes against IS by the US-supported Syrian Democratic Forces (SDF) — at least 60% of which are made up of YPG fighters — also contrasts sharply with the failure of groups supported by Ankara to make any headway against the Bashar al-Assad regime or IS.

The recent failure of groups supported by Turkey to stop IS advances on the Marea-Azaz line, while the SDF makes gains against IS in its sectors, has underscored this again. Having prioritized the fight against IS in Syria and Iraq, Washington is unlikely to sever ties with the YPG simply to please Ankara.

Turkey’s support for groups in Syria with links to al-Qaeda-related Jabhat al-Nusra, which the United States considers a terrorist group, also acts as a disincentive for Washington in this regard.

Ankara is now watching apprehensively as US Special Forces and US fighter jets work closely with the SDF to clear the northern sector of Raqqa from IS, in preparation for an onslaught against the whole city in coming weeks.

Turkey has declared the 98-kilometer (60-mile) stretch along its border between the Syrian towns of Jarablus to the east and Azaz to the west a no-go area for the Kurds and started shelling YPG positions in February from across the border to hammer this point home.

Turkey is concerned that if this region falls to the PYD, it will unite Kurdish-held territories east and west of the Euphrates River and lay the groundwork for an autonomous Kurdish region along the Turkish border. Turkey is worried that the liberation of Raqqa by SDF forces will speed up this process.

Compounding Ankara’s dilemma is the fact that it, too, is fighting IS, which has mounted deadly suicide attacks inside Turkey and rocket mortar attacks against the Turkish town of Kilis near the Syrian border.

Foreign Minister Mevlut Cavusoglu suggested earlier this week that Turkey could mount joint operations with the United States and other Western allies in northern Syria in order to dislodge IS from the region, provided the PYD is excluded from these operations.

Serkan Demirtas from Hurriyet Daily News cited unnamed US officials who said they had not received a detailed plan about Cavusoglu’s proposal. “Some concepts have been put forward, but none are doable or represent a detailed plan that can be enforced rapidly,” the official said.

The fact that US-led coalition jets taking off from Incirlik Air Base in Turkey are supporting YPG fighters as they advance toward Raqqa also shows how little real influence Turkey wields over developments in the region.

There is not even a hint from Ankara that it might prevent the use of Incirlik by the anti-IS coalition if the base is used to back YPG fighters. Ankara is aware that closing the base would remove what little influence it has over the United States.

The recent advances by IS along the Marea-Azaz line has left Turkey facing another dilemma with regard to refugees from the region. The refugees are reportedly moving toward regions held by the SDF, thus turning areas held by the Kurds into a potential safe zone, which the United States will clearly want to encourage.

Ankara is hardly likely to be happy over this because it will legitimize PYD rule in the region further in Western eyes. If IS advances along the Marea-Azaz line cannot be prevented, this will also increase the value of the YPG for the West as a much more viable force against IS when compared to groups supported by Turkey.

The ultimate dilemma for Turkey, however, is the fact that it has ended up in what appears to be an ineffectual situation in Syria, even though it is one of the countries bearing the biggest brunt from this crisis.

Mehmet Tezkan, a well-known columnist for daily Milliyet, argues that this situation is of Turkey’s own making. “If you insist that the only correct foreign policy position is yours. … If your actions at the start were wrong. If you buttoned your shirt the wrong way at beginning. … Then this is what you end up with,” Tezkan wrote in his column.

He went on to question Turkey’s opposition to YPG fighters entering Raqqa, asking what the alternative being proposed was. “Should Raqqa belong to IS then? No, you say, it should belong neither to IS nor to the YPG. If that is the case, should Assad take the city? No, you say, that won’t do either. So whose should it be? This is Ankara’s dilemma,” Tezkan argued.

Even the mood in the Islamist and staunchly pro-government media appears to be coming around to accepting that Turkey’s current Syria policy is unsustainable.

Ibrahim Karagul, the editor-in-chief of daily Yeni Safak, suggested in his column this week that the time has come for a change in the government’s Syria policy. “Turkey has to do today what it should have done three years ago,” Karagul wrote. “If we can’t intervene to prevent Syria from turning into a front from where Turkey can be hit for decades, then we will be responsible for the price this country will have to pay for this tomorrow.”

It is not clear if Karagul was exhorting military intervention by Turkey in Syria, a course that most strategists argue is unlikely to produce the expected results, or an intervention of another unspecified kind.

Karagul’s remarks nevertheless point at the confusion in the pro-government camp over Syria, as well as Ankara’s inability to find the right course in order to overcome its multiple dilemmas and make Turkey a key player in Syria again.

If that cannot be done, it is clear that Ankara will not be able to play a proactive role in efforts aimed at resolving this crisis in a manner that also addresses Turkey’s security concerns with help from its allies.