What is Turkey’s military strategy in Syria?

Turkish President Recep Tayyip Erdogan's recent statement once again revealed that Ankara's priority in Syria is not fighting against the Islamic State, but rather stopping Kurds' advances. 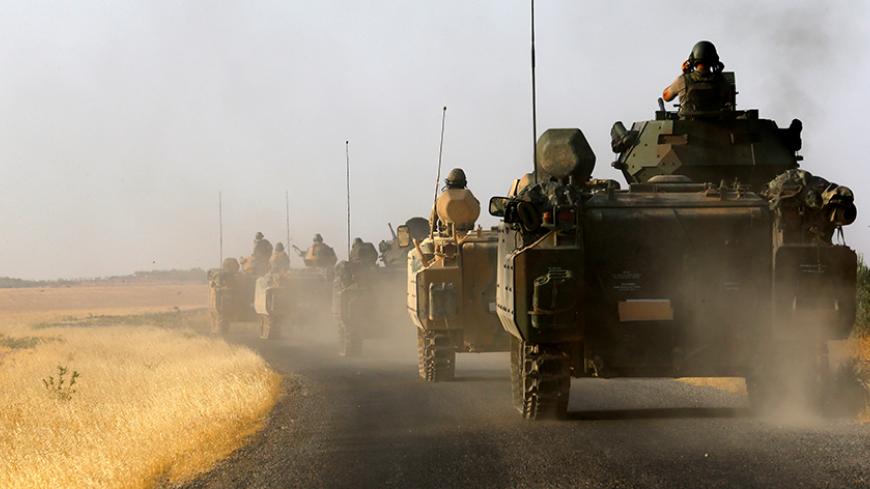 Flying back from New York, where he addressed the UN General Assembly's annual meeting, President Recep Tayyip Erdogan told reporters on his plane that Turkey would participate in a US-led operation against the Islamic State (IS) stronghold of Raqqa, provided Syrian Kurdish fighters from the People's Protection Units (YPG) are not involved in it.

His remarks revealed once again that stopping advances in Syria by the YPG — whose fighters form the bulk of the US-supported Syrian Democratic Forces (SDF) — remains Ankara’s main priority.

Erdogan nevertheless continues to row against the current with regard to the YPG and its mother organization, the Democratic Union Party (PYD), both of which Ankara says are terrorist groups linked to the outlawed Kurdistan Workers Party (PKK).

Washington has consistently refused to accept Turkey’s position, making it clear that it considers the YPG to be its ally in Syria and the most viable force against IS. Much to Ankara’s annoyance, the United States is also continuing to arm the YPG as preparations to liberate Raqqa gather steam.

Erdogan’s remarks show once again that Ankara’s Syria policy is still based on unrealistic conditions that have left Turkey largely isolated as it tries to cope with negative fallout from this crisis. Insisting fruitlessly for a long time that toppling Bashar al-Assad — and not fighting IS — should be the main focus, Ankara ended up by painting itself into a corner that it is still trying to get out of.

Turkey’s “conditional” approach to Syria, which is now revealing itself over the question of the Syrian Kurds, remains the main obstacle preventing it from working much more closely and effectively with its NATO allies under a viable strategy.

“Our foreign minister and other officials are discussing Raqqa [with the United States]. But it is not possible to say anything at this stage because we can’t see the US position clearly yet,” Erdogan told reporters en route from New York over the weekend.

According to Abdulkadir Selvi, a columnist for the daily Hurriyet who was on Erdogan’s plane, Ankara is proposing that Turkish-supported fighters from the Free Syrian Army (FSA), which Turkish officials maintain is around 65,000 strong now, should replace YPG fighters, and that Turkish jets should fly alongside US jets to free Raqqa.

The FSA, however, has not proved itself to be a viable replacement for the YPG. Its speedy liberation of the town of Jarablus with Turkish military support, after Turkish forces entered Syria on Aug. 24, and rapid advances along the Turkish border had more to do with the withdrawal of IS from the region to the town of al-Bab than with the military successes of the FSA.

Analysts also say that the rapid advance in the region by Turkish forces and the FSA would not have been possible if the United States had not provided air support, and had Russia not decided to allow this to happen, because Washington and Moscow also wanted the Turkish border region to be cleared of IS.

Erdogan says Turkey’s next target is al-Bab, another IS stronghold south of Jarablus that the YPG is also trying to get to before Turkey and the FSA. Military analysts, however, indicate that liberating al-Bab will require serious fighting that the FSA is not capable of doing on its own.

This is why Ankara is seeking US support for this operation, but appears not to have secured it yet. US Defense Secretary Ashton Carter has made it clear that they do not want to see Turkish forces and the FSA moving south toward al-Bab.

Washington suspects that Turkey’s intentions here have more to do with blocking the YPG than fighting IS. Ankara, for its part, is aware that it can’t take al-Bab on its own without heavy losses. Tellingly, Selvi also reported that Ankara is in no hurry to move on al-Bab.

Washington and other members of the US-led coalition are also cool toward Turkey’s participation in the operation to liberate Raqqa. Turkey’s recent rapprochement with Russia does not provide Ankara with any advantages on this score either.

Moscow is also not keen to see Turkish forces and the FSA advancing farther south in Syria, especially toward Aleppo, which Russian and Syrian jets have started bombing relentlessly again.

Retired Turkish Ambassador Ali Tuygan, a former Foreign Ministry undersecretary, believes Turkey is caught again without a clear strategy in Syria. “It is not clear what its plans are and how it hopes to achieve these,” Tuygan told Al-Monitor.

Pointing out that “Turkey did not have a PYD problem five years ago,” Tuygan said Ankara’s main problem was to convince the United States and Russia about its intentions in Syria. “It says it is fighting IS but it is not clear how it will do this. There are limits to what it can do by itself. It does not have a magic wand with which it can realize its aims,” Tuygan said.

Retired Ambassador Faruk Logoglu, whose former posts include Washington and who has also served as Foreign Ministry undersecretary, is also unclear about Ankara’s aims.

“When Turkey first went into Syria, its declared target was to clear the border region from IS. This was understandable. Its operation also prevented the PYD from establishing a Kurdish corridor along the Turkish border,” Logoglu told Al-Monitor.

“It is uncertain, however, what it aims to achieve when it says it will move farther south by 45 kilometers [28 miles]. Is its intention to prevent the PYD or to establish a safe zone? And if it moves south, how does it hope to hold on to territory there, even with 100 tanks, given that this is an asymmetric war,” Logoglu asked.

Logoglu also expects Turkey to meet opposition from the United States, Russia and Iran if it insists on pushing southward. “We are dealing with an open-ended situation that is fraught with many risks,” Logoglu said.

Meanwhile, the call by US Secretary of State John Kerry at the United Nations last week for what amounts to a no-fly zone in key areas of Syria in order to de-escalate the fighting and facilitate aid to beleaguered civilians was latched on to by government circles in Ankara. They said this showed that Washington is coming around to Turkey’s position on Syria.

Turkey has been demanding a safe zone in Syria for civilians and as protection from regime aircraft. It was quick to maintain a “we told you so” attitude after Kerry’s suggestion, but there is little in this suggestion that Ankara can rely on, since the Assad regime and Russia are likely to reject it.