Are Ankara’s prospects in Syria dimming?

Turkey is hemmed in by the United States and Russia in Syria, unable to achieve its aim of blocking Kurdish gains. 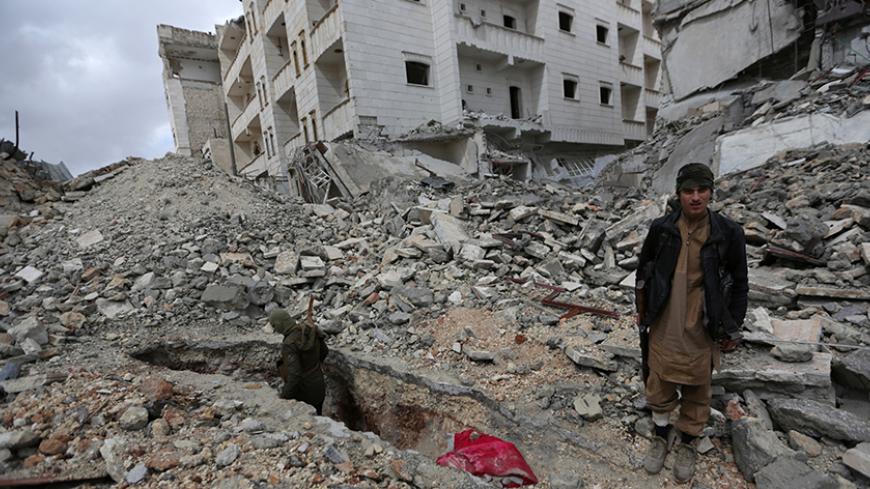 Rebel fighters stand amid rubble at the entrance to a tunnel they said belonged to Islamic State fighters, which connects the city to Aqeel Mountain, in the northern Syrian city of al-Bab, Syria, March 13, 2017. - REUTERS/Khalil Ashawi

Having been refused a role in the liberation of Mosul from the Islamic State (IS), signs are mounting that Turkey will also be excluded from the approaching operation to liberate Raqqa. Turkey’s Operation Euphrates Shield has been unable to advance farther than the outskirts of al-Bab in northern Syria, after the Turkish army and its Free Syrian Army (FSA) proxies took that town in February from IS.

President Recep Tayyip Erdogan’s determination to move northeast on to the town of Manbij, which is held by US-supported Syrian Democratic Forces (SDF), and then on to the IS stronghold of Raqqa, in order to carve out a 5,000-square-kilometer (1,930-square-mile) “safe zone,” appears highly unrealistic at this stage, analysts say.

Meanwhile, Russia has blocked any advance by Turkey and the FSA northwest of al-Bab toward the Kurdish-held town of Afrin. Washington and Moscow appear to have effectively hemmed in the Turkish army in a region along the Turkish border, beyond which it is unlikely to be allowed to move because of doubts about Turkish intentions.

Ankara’s reference to a safe zone is widely accepted as a euphemism for a region it wants its Syrian proxies to hold in order to prevent Syrian Kurds from gaining any territory.

Although Ankara was bracing for US opposition to its move on Manbij (also near the Turkish border) — which it has vowed to free from the Kurdish People's Protection Units (YPG) operating under the banner of the SDF — the unexpected blow to its plans came from Russia.

Ankara says the YPG and its mother organization, the Democratic Union Party (PYD), are terrorist organizations. PYD representatives nevertheless continue to be welcomed in Washington and Moscow, while both the United States and Russia are cooperating with the YPG in the field.

Following the capture of al-Bab, Moscow announced that Turkish-supported forces had reached the demarcation line south of the town — previously agreed upon with Ankara — in order to prevent clashes between the FSA and the Syrian army, which had moved on al-Bab from the south.

No such agreement had been announced by Ankara, so the news from Moscow — which effectively laid down the limit beyond which Turkey would not be allowed to advance — caught the Turkish public by surprise given Erdogan’s remarks.

Ankara has offered to participate in the Raqqa operation if the YPG is excluded from it. Hopes were raised in Turkey when Turkish Chief of General Staff Gen. Hulusi Akar hosted his US and Russian counterparts, Gen. Joseph Dunford and Gen. Valery Gerasimov, at the Turkish Mediterranean resort of Antalya earlier this month to present his plan for this.

Ankara’s offer, however, seems to have fallen on deaf ears.

“Turkey failed to convince the United States and Russia to allow it to assume active participation in retaking the Syrian town of Raqqa from the Islamic State of Iraq and Levant [ISIL], or Daesh, on the condition of stopping collaboration with the [YPG],” Murat Yetkin, a well-sourced political analyst and editor-in-chief of the Hurriyet Daily News, reported. ISIL and Daesh are alternative names for IS.

“The Antalya move was, in a way, a final attempt by Turkey to make its point that it was ‘wrong to fight a terrorist organization with the help of another terrorist group,’” Yetkin added.

Retired Brig. Gen. Naim Baburoglu drew a direr picture, saying the Euphrates Shield mission has failed. “The aim was to prevent the YPG-held regions east and west of the Euphrates from connecting,” Baburoglu told Al Monitor.

“Turkey, however, can’t move northeast of al-Bab toward Manbij, where it is blocked by the US, and it can’t move on the YPG-held town of Afrin northwest of al-Bab because of the Russian presence there,” he added.

“Meanwhile, Manbij and Afrin have been connected by road south of al-Bab,” Baburoglu said.

A Reuters report earlier this week that claimed Russia was setting up a base near Afrin under an agreement with the YPG caused shock waves in Turkey. Moscow denied the claim but acknowledged the Russian presence in the region.

“In accordance with the Russian-Turkish agreement signed on Dec. 30, 2016, the Russian Center of Reconciliation carries out round-the-clock cease-fire monitoring. To prevent the violation of the cease-fire, one of the branches of the center has been set up near Afrin in a spot bordering the territory held by the Kurdish militias ... under the command of the Turkish-controlled [FSA],” Moscow said.

This statement did little to assuage Ankara’s concerns since any Russian presence in Afrin will prevent the Turkish military from mounting operations against the YPG there.

Baburoglu said Moscow “is not prepared to leave the PYD to the US” and is therefore courting the Syrian Kurds, too. Foreign Minister Sergey Lavrov has acknowledged that Russia was mediating between the regime and Syrian Kurds, saying, “We believe that such intra-Syrian dialog is useful.”

Given its need for good relations with Moscow and because of its rapidly deteriorating ties with the West, Ankara is largely silent with regard to these Russian overtures; however, it is clearly not happy.

Turkey is also engaged in an effort with Russia and Iran in the so-called "Astana process," aimed at securing a settlement in Syria.

Like Baburoglu, professor Mesut Hakki Casin of Ozyegin University in Istanbul says the United States and Russia are unlikely to abandon the PYD.

“Both powers agree that rights should be given to the Syrian Kurds. In the long run, Syrian leader Bashar al-Assad will have to accept that in order to survive,” Casin said in a recent interview.

Baburoglu also believes the PYD has become a geopolitical player in Syria, something that was never foreseen by Turkey.

Given its weakening position in Syria, there is speculation that Ankara is now trying to use other means in order to regain lost ground. The fact that it allowed around 50 Sunni Arab tribal leaders from Syria to convene in Urfa recently has merely added fuel to such speculation.

According to the spokesman for the tribes, their aim is to unite in order to not only defeat the Assad regime, the PYD and Hezbollah, but also to end the Russian and Iranian intervention in Syria.

Popular Hurriyet columnist Ertugrul Ozkok noted that this meeting was allowed to go ahead at the very moment that Ankara was co-sponsoring a meeting with Moscow and Tehran in Astana, Kazakhstan, which brought representatives of the Syrian regime and opposition groups together.

Ozkok said mockingly that if there was anyone in the Turkish Foreign Ministry who believes in any advantage to such inconsistent behavior, he was "prepared to slash [his] own wrists.”

There is also speculation, fueled by remarks made by Erdogan in the recent past, about a Turkish effort to turn the FSA into Syria’s new army. If this were to come about, it would mean a Sunni-dominated, anti-Kurdish and anti-Shiite army. Given the big picture as it stands today, though, such an army is highly unlikely to be formed, since it would be blocked by Russia and the United States.

The bottom line in all of this is that the prospects for Ankara’s realizing its aims in Syria appear to be dimming by the day — a fact that is also being increasingly noted by Turkish analysts.