Ankara riled by US push for Kurdish seat at Syria talks

US statements that Syrian Kurds should be included in talks on Syria's future have further agitated Turkish leaders, who are already upset about Washington's coalition with the People's Protection Units. 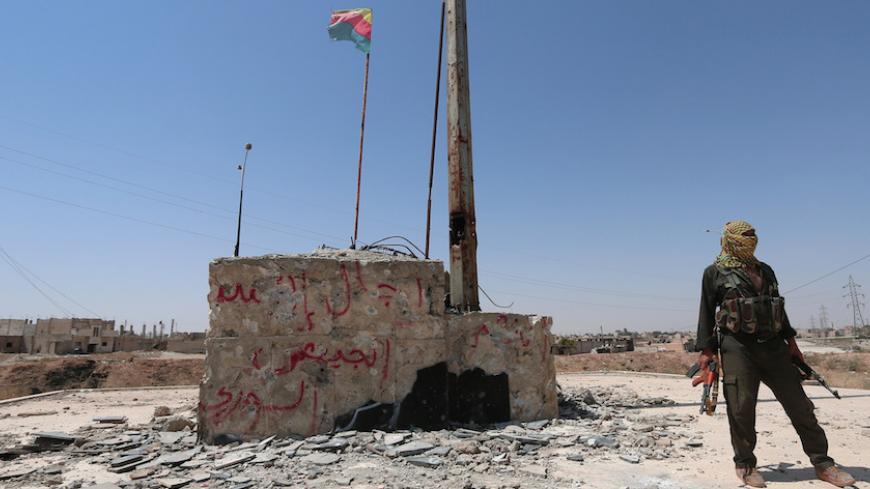 A Kurdish fighter stands with his weapons near a fluttering Kurdish flag in the Ghwairan neighborhood of Hasaka, Syria, Aug. 23, 2016. - REUTERS/Rodi Said

Tensions between Turkey and the United States over the latter’s alliance with Syrian Kurds in the battle against the Islamic State show no sign of abating, as Turkish leaders continue to accuse Washington of working with its enemies. “Turkey’s allies are still providing weapons to the YPG [People’s Protection Units],” Deputy Prime Minister Veysi Kaynak fumed Jan. 11. “And what business does a terror group have at the peace table?”

Kaynak was responding to remarks by US State Department deputy spokesman Mark Toner, who at a Jan. 10 press briefing asserted that the YPG’s political wing, the Democratic Union Party (PYD), needs to take part in the currently stalled Geneva peace talks on Syria. “This process has to include all Syrians, and that includes the Syrian Kurds,” Toner said.

Turkey’s rants against the YPG have grown louder in recent weeks as the outgoing Barack Obama administration continues to weigh arming and training the YPG-dominated Syrian Defense Forces, a coalition of Arabs and Kurds, in preparation for a planned offensive to take Raqqa from IS. Turkey argues that the weapons will wind up in the hands of the Kurdistan Workers Party (PKK), which is fighting for Kurdish autonomy in Turkey and is closely linked to the YPG.

Obama is widely expected to delay any decision on the issue and throw the ball into President-elect Donald Trump’s court. Turkish officials who spoke to Al-Monitor on strict condition of anonymity claimed that their arguments against the YPG had been bolstered by a Jan. 7 article in the Washington Post that laid bare the extent of PKK indoctrination within SDF ranks.

Turkey’s hopes that Trump will ditch the Kurds will have been dampened by the news that Brett McGurk, the US envoy to the anti-IS coalition, will probably retain his post in the new administration, unlike most other political appointees. McGurk and Army Lt. Gen. Stephen J. Townsend, commander of the anti-IS Operation Inherent Resolve, are said to be big advocates of moving forward with training and equipping the Kurds. Proponents of the plan argue that Turkey will huff and puff, but when presented with the fait accompli will eventually pipe down in a replay of when the United States began air-dropping weapons to the YPG during the IS siege of Kobani in October 2014.

The YPG and the PYD have been excluded from planned peace talks between opposition rebels and the Syrian government in the Kazakh capital of Astana to be co-hosted by Turkey and Russia. The talks are meant to build on the shaky cease-fire that took hold in Syria Dec. 31. A Russian delegation arrived in Ankara Jan. 10 to prepare for the summit, the Anatolian News agency reported today.

Until recently, Russia had lobbied hard in favor of PYD participation in discussions on Syria's future. In addition, Moscow has repeatedly said that Syrian Kurds need to be given federal status, something the regime of President Bashar al-Assad squarely rejects. The Russians have toned down such support in recent months, however, mainly to humor Turkey, whose influence over Free Syrian Army rebels remains critical to any peace plan.

Since August, when Turkish troops moved into northern Syria, Turkey and its rebel proxies have been simultaneously fighting against IS and the YPG. On Jan. 7, the Turkish army announced that it had so far killed 291 YPG fighters.

Turkish efforts have to this point succeeded in preventing the YPG from joining the large chunk of territory it controls east of the Euphrates River with Afrin, a Kurdish-majority “canton” to the west. YPG sources contacted by Al-Monitor in Syria have confirmed that the combined Turkish rebel offensive has cut off the YPG’s westward access to the IS-held town of al-Bab from Arima. Al-Bab, sitting at the intersection of YPG-held Manbij, Raqqa and the Turkish border, has become a key battleground between Turkey and the IS jihadis as well as between Turkey and the YPG.

There are now reports that the Syrian army is inching its way toward al-Bab from the south. The YPG sources say it remains unclear whether recent Russian airstrikes against IS in the area are meant to clear the path for the regime rather than for Turkey. “Notice that the [Russian] strikes are to the south of al-Bab,” said a YPG commander via WhatsApp. “Who does that benefit? The regime, of course.”